Will Rohingya be sent to a remote island? - GulfToday 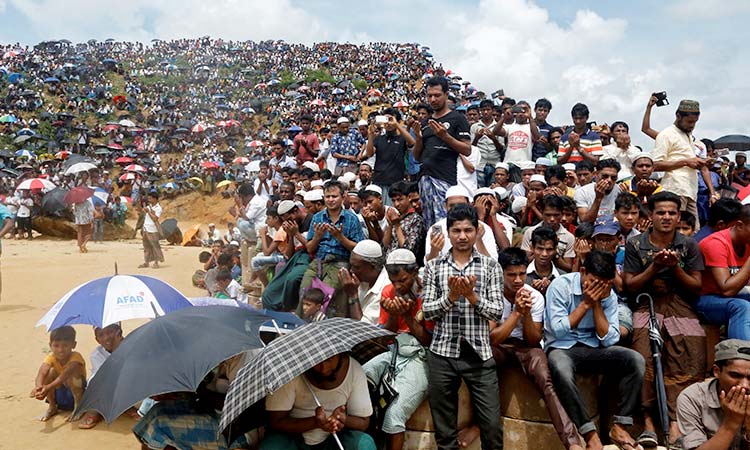 Rohingya refugees take part in a prayer as they gather to mark the second anniversary of the exodus at the Kutupalong camp in Cox’s Bazar, Bangladesh. Reuters

Shashank Bengali, Tribune News Service
The biggest refugee camps in the world, on a coastal strip in southern Bangladesh, house 1 million Rohingya Muslims from Myanmar in flimsy shacks vulnerable to flooding and deadly encounters with elephants.

There’s at least one major problem: It’s in the middle of the ocean.

A controversial proposal to move 100,000 refugees to Bhasan Char — an uninhabited spit of land in the Bay of Bengal — is moving forward despite opposition from Rohingya leaders and human rights groups. Bangladesh’s minister for refugee affairs recently told The Associated Press that the island was “ready for habitation,” though he gave no timetable for the relocation.

Here is more on the plan for what some have dubbed “Rohingya Island”:

What is Bhasan Char? The island didn’t exist until about two decades ago. It formed from sediment that washed down from the Himalayas along the Meghna River and deposited in the bay, more than 20 miles from the Bangladeshi mainland.

The flat, featureless landmass covers about 15 square miles and is crisscrossed by tidal channels _ unremarkable down to its name, which translates to “floating island.”

In low-lying Bangladesh, these shifting islands face erosion and are inundated during annual monsoons. But since early 2017, Bangladesh has spent $275 million on stabilizing Bhasan Char.

The Bangladeshi military and the Chinese construction company Sinohydro have built an eight-mile, steel-covered embankment to protect against flooding and more than 100 shelters for when cyclones hit. The storms are another major concern: A 1991 cyclone in the Bay of Bengal left nearly 150,000 people dead.

Why does Bangladesh want to relocate refugees? The idea to move some refugees emerged in 2015, when Bangladesh was hosting about 300,000 Rohingya who had fled years of persecution and violence in neighbouring Buddhist-majority Myanmar, also known as Burma.

But in August 2017, Myanmar’s army launched a massive campaign of arson, looting, sexual violence and killing against hundreds of Rohingya villages, sending about 700,000 Rohingya fleeing to Bangladesh on foot. This week, the United Nations’ top court ordered Myanmar to prevent further attacks against Rohingya in Myanmar and to preserve evidence of genocide against the group.

Bangladesh initially said it welcomed fellow Muslims seeking refuge. But officials worry that the camps outside the beach town of Cox’s Bazar will become permanent and that a $1 billion international relief effort is provoking resentment among the local population in one of the poorest areas in the country.

“Bangladesh is concerned about not creating pull factors and not making camps more attractive than life in Myanmar,” said Jessica Olney, a researcher and analyst at the Center for Peace and Justice at Bangladesh’s BRAC University who has spent extended time in the camps.

Are refugees interested in leaving the camps? Hardly any refugees believe it is safe to return to Myanmar. Two attempts by Bangladesh and Myanmar to repatriate small numbers of refugees have found no takers.

Civilian leader Aung San Suu Kyi has acknowledged “possible war crimes” against the Rohingya but defended the army last month against genocide charges at the International Court of Justice. Nearly two-thirds of people in Myanmar, which has a population of about 55 million, oppose allowing the refugees to return, according to a recent regional survey.

At the same time, conditions in the more than 30 camps have grown tougher. Bangladesh has blocked mobile internet service, imposed restrictions on the refugees’ ability to get jobs and begun to erect a fence around the perimeter of the camps in what officials describe as a security measure. Many refugees retain hope of returning home one day.

“The refugees don’t want to go away from the Cox’s Bazar area because we really want to go back to our homeland,” said Nay San Lwin, a Rohingya activist living in Germany. “Moving to Bhasan Char _ that is very far away.”

Has anyone visited the island? The government has not permitted foreign journalists or Rohingya leaders to travel to Bhasan Char. Bangladeshi reporters who visited recently found the makings of a small town: a market, tea stalls, roads and rows upon rows of concrete barracks topped by red roofs.

Plans call for families of four to be housed in 12-by-14-foot rooms with shared kitchens and toilets. Although those accommodations might sound more comfortable than the bamboo shacks where most refugees live in the camps, Rohingya leaders are worried about health and safety on the island, which is three hours by speedboat from the mainland.

After touring Bhasan Char in January 2019, the UN special rapporteur for human rights in Myanmar, Yanghee Lee, said she remained unsure “whether the island is truly habitable.”

How likely is this plan to happen? Bangladeshi officials are determined to alleviate crowding in the camps and say they have identified 350 families willing to move to Bhasan Char. But the advocacy group Fortify Rights found that at least 14 families didn’t know they were on the list and opposed moving, raising more questions about the transparency of the process.

“The island is not a sustainable solution for refugees and no one knows that better than the Rohingya themselves,” said Matthew Smith, the group’s chief executive. “Threats of forced relocation cause unnecessary harm to refugee families already struggling to survive.”

As the outcry from human rights groups grew, Bangladesh paused plans to begin relocations in November and the UN said it would send a technical team to assess the island’s facilities and safety measures. But that visit was postponed too and is yet to be rescheduled.

Bangladeshi officials said they plan to allow Rohingya leaders to visit the island before anyone is moved. But some say they won’t be persuaded until UN experts release a thorough assessment.

“The island is less than 20 years old, and there is no guarantee that it will not disappear in the next monsoon,” Nay San Lwin said. “The best thing is if the UN team can visit, and if the UN says it’s liveable, then people can consider it. But before that no one should be relocated there.”