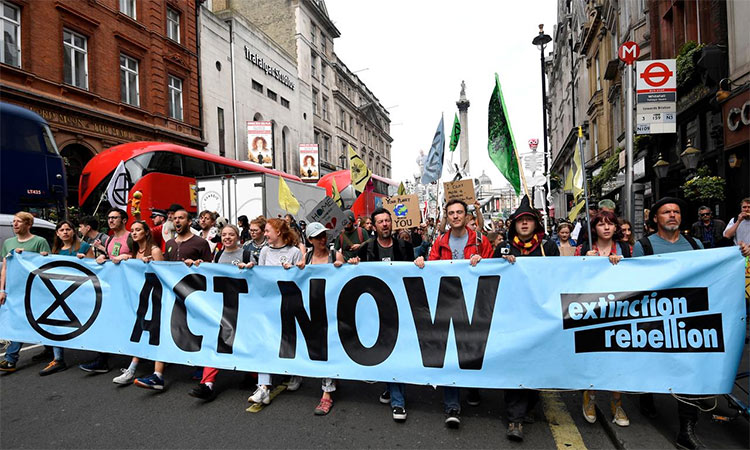 Officials in counter-terrorism claim that designating XR as extremist under Prevent was a “mistake”.

On Sunday, news broke that the counter-terrorism documents had designated Extinction Rebellion, a climate change movement, as an “extremist” ideology that should be reported to its Prevent programme. The document says to watch out for people who speak about the ongoing climate catastrophe in emotive terms and refers explicitly to the school strikes in which tens of thousands of students in the UK have taken part.

This isn’t surprising. Last year, news broke of a retired doctor referred to Prevent by his local NHS trust for joining XR, while the influential rightwing thinktank Policy Exchange published a report – co-authored by the former head of the Met’s Counter Terrorism Command, no less – called for it to be dealt with as an “extremist” group.

This is not to mention the curious case of “Aaron-gate”, the false report published of a young activist “groomed” by anti-frackers and referred to Prevent, or Netpol’s extensive coverage of counter-extremist apparatus used to police anti-fracker groups.

Officials in counter-terrorism have now claimed that designating XR as extremist under Prevent was a “mistake”, and have recalled the document that listed the group.

Some on social media have responded to the designation by saying that XR shouldn’t be targeted by Prevent, tacitly accepting the programme as otherwise legitimate. Yet, for those of us that have been campaigning against Prevent know all too well, this incident was not an error; it was an inevitability.

Prevent operates on an elastic notion of “extremism” that has never been legally defined by government, leaving it open to be expanded at will.

In recent years, student societies, especially those campaigning for divestment from fossil fuels, arms trade and other human rights abuses, have come under the hostile gaze of the Prevent duty; activists have been harassed by Prevent officers and their ability to organise events, and campaigns have been hampered by interference from Prevent.

Prevent, and the designation of groups and ideas as “extremist”, is never apolitical. The rationale for designating XR as such, because of “its anti-establishment philosophy that seeks system change”, is only further evidence of the state using Prevent as a weapon of repression, aiming to create a compliant generation through toeing the state line.

Who knows how many young activists, coming to terms with the world around them, developing their ideas about how to change it, and passionate about stopping climate chaos, are being reported for “extremism”?

Having been sharpened on the back of Muslim communities for over a decade, Prevent is increasingly being wielded against other groups, causes and communities. Muslim communities, communities of colour and those who were amongst the first and most hard hit by the Prevent duty – including examples such as harassing children in nurseries, or young people visiting GPs – have been warning that while the project of surveillance might be targeting them, it would inevitably be expanded. Their warnings were not heeded, as many remained silent out of fear of being labelled “radical” and “extremists” themselves.

Now, in the wake of the fires ravaging Australia, the floods devastating Indonesia and the ongoing destruction of the climate, the work of XR is more needed than ever – but as the challenges facing the movement change and evolve, so too must its own strategy.

There has never been a greater need for a broad-based coalition of groups and communities co-ordinating on action against climate change. XR has been criticised in the past for failing to acknowledge the serious concerns people of colour have raised with its strategy of co-operating with state surveillance apparatus, a strategy that has led to protest bans and harassment of activists while deterring other activists who would otherwise deeply support the group’s aims. Yet, evidently, none of this could stay the hand of state agencies in attacking the group in the end.

The latest Queen’s Speech represents perhaps one of the greatest threats to democratic dissent. Just as academics warned of the chilling effects of Prevent in universities years ago, this chill will be felt across all of society. With anti-boycott legislation, anti-strike legislation for rail workers (which will inevitably be expanded) and the ramping up of police powers, this is perhaps the most co-ordinated attack on our civil liberties for the years to come.

When speaking truth to power, it is not enough to offer abstract moralism to a force that only responds to strength. Social movements including XR must resist the urge to bend to the will of the state, or plead special tolerance for themselves whilst allowing the targeting of others. Civil liberties and the importance of protecting dissent and protests may present a difficult discussion for some but they are some of our most fundamental rights.