Cost of climate inaction could be high - GulfToday 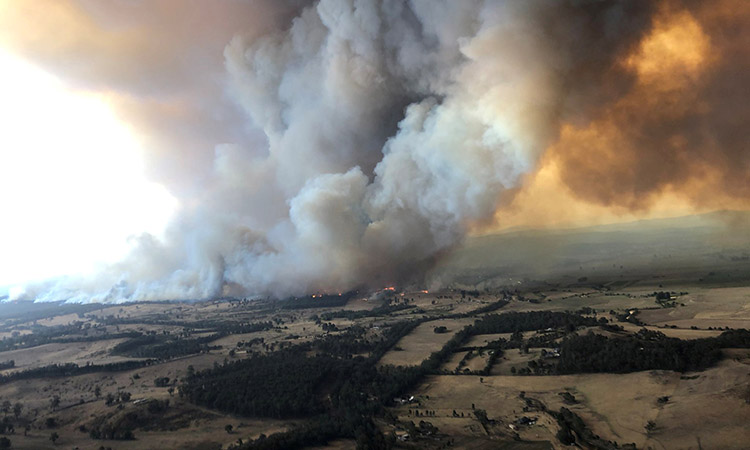 The monster fires that have caused extensive damage across Australia, scorching through more than 10.3 million hectares of land, killing several people and destroying thousands of buildings, is yet another indication that more needs to be done by the world community to tackle climate crisis.

The bushfire crisis has added pressure on Australian Prime Minister Scott Morrison’s conservative government to do more to combat climate change after Australia weakened its commitment to the UN Paris climate accord last year.

So much so that thousands of Australians took to the streets on Friday to protest against government inaction on climate change.

Climate scientists have warned the frequency and intensity of the fires will surge as Australia becomes hotter and drier and the message deserves serious consideration by policy makers.

Australia has warmed by about 1 degree Celsius since records began in 1910, NASA climate scientist Kate Marvel said this week. “This makes heat waves and fires more likely,” she said on Twitter. “There is no explanation for this - none - that makes sense, besides emissions of heat-trapping gases.”

The issue is not confined to Australia. The year 2019 was the second hottest on record and ended the hottest decade in history, according to the European Union’s climate monitoring service.

Data released by the Copernicus climate Change Service (C3S) showed that worldwide temperatures last year were second only to 2016, in which temperatures were boosted by an exceptionally strong El Nino weather event.

Average temperature in 2019 was only a few hundredths of a degree below the 2016 level.

The five warmest years in record have all occurred in the last five years and the period of 2010-2019 was the hottest decade since records began.

Globally temperatures in 2019 were 0.6 Celsius warmer than the 1981-2010 average. Earth’s temperature over the last five years was 1.1C-1.2C hotter than pre-industrial times.

Last year was Europe’s hottest ever.

2018’s top weather disasters showed that even the world’s most advanced economies could find themselves at the mercy of meteorological events amplified by global warming.

The UAE, on its part, deserves praise for remaining committed to tackling the consequences of climate change and promoting efforts to adapt at the national level, by moving to a low-carbon green economy in line with the 2015-2030 UAE Green Agenda, the National Climate Change Plan 2017-2050 and the UAE Energy Strategy 2050.

The efforts continue at different levels. For example, CAFU, the MENA region’s first on-demand delivery app for motorists has partnered with soil, plants and drone experts to announce an ambitious project in a commitment to fight climate change.

The one-of-a-kind project has seen the development of specialised drones supported with sophisticated technology, which will allow the startup to plant more than one million Ghaf trees in the UAE.

In a pilot project in December 2019, 4,000 seeds were planted by drones in Sharjah. The dedicated area will now be monitored to evaluate the project’s early success.

The Ghaf tree — which was the symbol of the government’s ‘Year of Tolerance’ campaign — is an indigenous tree that is able to survive in the region’s harsh conditions. Its roots penetrate the soil up to 80 metres deep and require a minimal amount of water and maintenance to be able to absorb up to 34.65 kg of carbon dioxide per tree, per year.