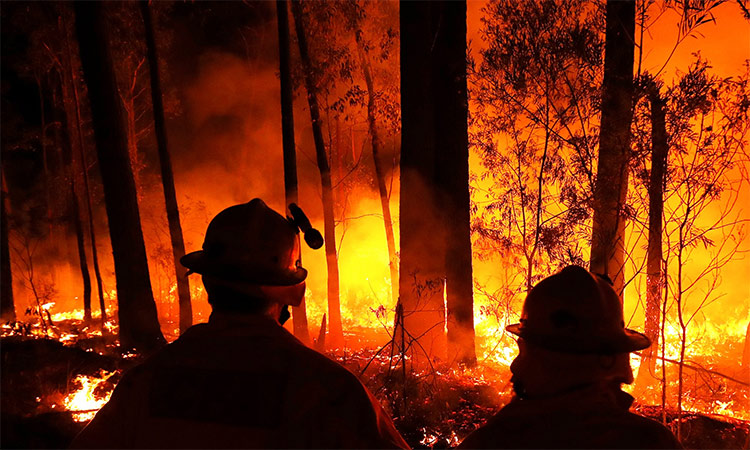 A serious note should be taken of views expressed by some scientists that man-made global warming has played a major role in feeding the fires.

The extensive damage caused by fires that have ravaged more than 8 million hectares of land across Australia, killing several people, destroying thousands of buildings and leaving many towns without electricity, is hugely distressing.

Adding to the anguish are reports of death of as much as half a billion wild animals in the inferno in New South Wales.

The fires have killed thousands of koalas and kangaroos, and also raised questions about whether any members of a mouse-like marsupial species that carries its young in a pouch have survived.

Similarly, it remains unclear how many from a unique flock of glossy black-cockatoos got away from the flames and whether they have a future on an island where much of their habitat has gone up in smoke.

Wildfires are common during the southern hemisphere summer, and Australians generally take a pragmatic view of them. But this year’s fires arrived unusually early, fed by drought and the country’s hottest and driest year on record.

A serious note should be taken of views expressed by some scientists that man-made global warming has played a major role in feeding the fires, along with factors like very dry brush and trees and strong winds.

Australia’s government insists it is willing to pay “whatever it takes” to help communities recover from deadly wildfires and Prime Minister Scott Morrison has declared that the government has committed an extra 2 billion Australian dollars towards the recovery efforts, in addition to the tens of millions of dollars that have already been promised.

Nevertheless, huge challenges are lined up for him as he continues to face criticism for being slow to act.

His downplaying of the need for his government to address climate change has not helped matters either.

Environmental group Greenpeace has dubbed the relief funds announced by Morrison “a drop in the ocean,” given the widespread devastation from the fires.

Australia’s capital, Canberra, had the worst air quality of any major city in the world for much of Monday. Pictures on social media also showed the city of Melbourne cloaked in thick smoke.

Rallies have been planned on Friday to call on the Morrison government to step up efforts to tackle climate change,

For the naysayers of climate change crisis, actor Russell Crowe’s message should serve as a cause for introspection. As he mentioned, “Make no mistake, the tragedy unfolding in Australia is climate change based. We need to act based on science, move our global workforce to renewable energy, and respect our planet. That way we all have a future.”

Businesses too have been badly hit. Many companies in the country are reporting hits to business with resorts shutting their doors, cheesemakers struggling to secure milk supplies and insurance claims on the rise.

As many as 5,850 fire-related insurance claims have been lodged since early November with insured losses estimated at A$375 million, according to the Insurance Council of Australia (ICA).

With conditions still too dangerous in many areas, the full cost of the disaster is not expected to be known for several weeks.

It should not be forgotten that more than 135 fires are still burning across New South Wales, including almost 70 that have not been totally contained.

Considering the enormity of the situation, it is imperative that the authorities do everything within their means to see to it that the conditions do not worsen. There is absolutely no room for complacency.