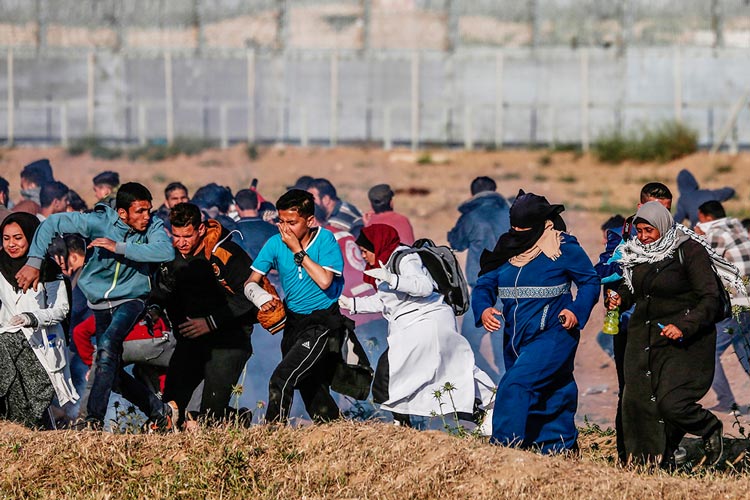 Hundreds of Palestinians took part in protests along the Gaza-Israel border on Friday.

Hundreds of Palestinians took part in protests along the Gaza-Israel border on Friday. This was the last of the demonstrations until March.

The protests were being held even as Israeli Prime Minister Benjamin Netanyahu won a landslide primary victory, but he will need a big win in national elections in March if he hopes to stay in office.

The army fired some volleys of tear gas in the southern Gaza Strip after protesters in the border town of Rafah and in Khan Yunis approached the fence, hurling rocks and Molotov cocktails at the soldiers on the other side of the frontier.

The November 14 air strike targeted the home of Rasmi Abu Malhous, described by Israel as a commander in Islamic Jihad, the Palestinian movement against which Israel had launched a three-day campaign.

He and eight members of his family were killed in the attack, including five children.

The Israeli army said the strike was due to a faulty assessment of the risk to civilians.

During the confrontation, Israeli forces attacked dozens of targets in the enclave. Palestinian officials said 35 Palestinians were killed and more than 100 wounded.

In an apparent embarrassment at a critical moment, Netanyahu was rushed off a stage on Wednesday after a rocket fired from Gaza set off an air raid siren at a campaign rally in the southern city of Ashkelon. Israel responded with a wave of airstrikes.

Israel contends that any return of Palestinian refugees or their descendants would mean an end to its status as a Jewish state and accuses Hamas of orchestrating the protests as a cover for attacks.

During his final years as prime minister, Ehud Olmert repeatedly warned that if Israel did not adopt the “two-state solution” involving the emergence of a Palestinian state next to Israel, it would not be able to preserve itself as a “Jewish democracy” and would have to adopt an apartheid system of governance, which consigns Palestinians to endless military occupation. This has already happened.

At least 348 Palestinians have been killed in Gaza by Israeli fire since the marches began, the majority during the demonstrations.

A further 7,800 people have been wounded by gunfire, according to the World Health Organization.

The suffering of the Palestinian refugees has gone on for too long and the issue calls for serious attention of the international community.

Palestine refugees in the West Bank, including East Jerusalem, Gaza, Jordan, Lebanon and Syria are continuing to face a range of daunting human development and protection challenges.

Central to these pressures is the way in which the ongoing occupation of the Palestinian territory and the blockade of Gaza dramatically impact their lives. The effects of endless violence, incursions, lack of freedom of movement and employment opportunities, along with increasing levels of food insecurity and psychological trauma are indeed alarming and expanding. Israel’s goal is to cover up increasing incidents of escalation of settler attacks and violations of Palestinian human rights by the occupation.

The world community should not allow this to happen. It shouldn’t permit the ordinary people to suffer just because the politicians wish to remain in power and use the commoners’ woes as their grazing ground.