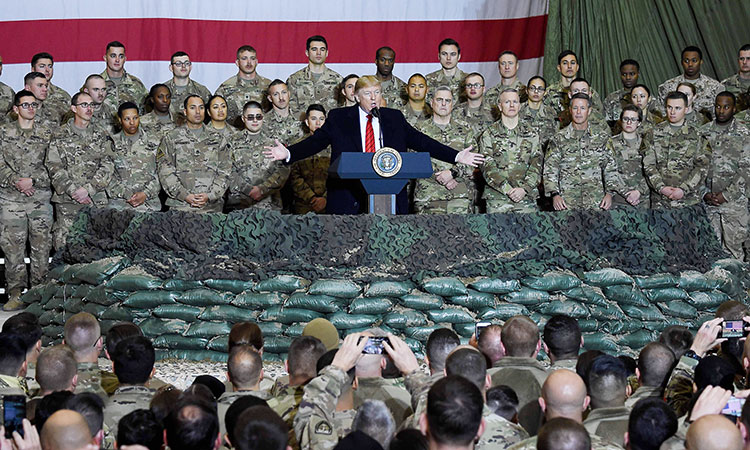 Donald Trump speaks to the troops during a surprise Thanksgiving day visit at Bagram Air Field in Afghanistan. File/AFP

Surprise, surprise, the US government — over the last three presidential administrations — has lied to us about progress in the Afghan war, the longest conflict in American history.

According to the Washington Post, which sued the government for the release of candid interviews with more than 400 officials — generals, diplomats, aid workers and Afghan government personnel involved in the war — such officials deliberately lied to the American people about progress in the conflict and hid evidence that the war had become unwinnable. The Post then reported the reaction to its blockbuster story: “Lawmakers, veterans and experts have expressed shock and resignation after a Washington Post report unveiled 18 years of distortion by US officials over the prosecution of the war in Afghanistan.” Really? Well, they shouldn’t have been.

The old aphorism, “the first casualty of war is truth,” has become a cliche because it’s almost always true. Even during successful conflicts, government propaganda machines are there to cover up setbacks and foibles.

However, when the war isn’t going well, those machines kick it up a notch. Remember “Baghdad Bob,” Saddam Hussein’s public relations guy during the US invasion of Iraq, who kept telling bald-faced lies right up until the Iraqi military was crushed?

One might wonder if such blatant dissembling only comes from dictators, but the secret Pentagon Papers, the US government’s own history of the Vietnam War that was leaked to the media, indicated that democracies also tell whoppers to avoid telling their citizens hard wartime truths. The Post’s reporting on Afghan war lies by officialdom is already being compared to those monumental papers.

One can forgive the public a bit for being shocked when the Pentagon Papers were released, because it had been more than 60 years since the military had fought a counterinsurgency (COIN) war against guerrillas in the Philippines at the turn of the 20th century. During that war, congressional hearings had exposed US government torture and other atrocities during a very tough fight against Filipino insurgents.

In this instance, the COIN war in Afghanistan started less than 30 years after the Vietnam War ended. So many in the public should have been wary of the Afghan war when it morphed from attrition of Al Qaeda and their Taliban hosts after the 9/11 attacks into a COIN war, which usually becomes a long, drawn-out effort to build or rebuild a nation. In Vietnam and Afghanistan and Iraq after the initial invasions, the United States tried nation build by backing illegitimate and corrupt client governments. Unlike conventional wars between large armies in uniform in which the US military has proven itself very adept, COIN warfare against much poorer, rag-tag guerrillas, which don’t wear uniforms, use hit-and-run tactics, and then blend back into the local population has been much more problematic.

Guerrilla warfare is the most successful form of warfare in human history and gives the poor a good chance to beat the rich. The strategy most likely to give some chance of winning against such guerrillas is 85% political (backing a legitimate and clean government), 10% administrative (providing the population with basic services to win its “hearts and minds”), and only 5% military. Yet most of the effort and attention in Vietnam, Afghanistan, and Iraq centered around the military aspects of the war.

However, militaries are not organisations that are very good at governing or nation building. For example, US military units in Afghanistan were initially tasked with local governance and training the Afghan security forces. Because US forces are highly effective on the battlefield, American commanders are tempted to let them fight rather than train local forces.

However, despite local forces being much less capable in combat, in the long term they may be more effective because as locals, they can gather more intelligence on who the guerrillas are and have a better chance of performing the non-military cultural tasks of COIN warfare (95% of the effort). Also, the American public might have wondered why the brutal Taliban were able to win any “hearts and minds” of the all-important local populace; the answer is because the US military, although benevolent by comparison, is often hated as a foreign invader, whereas the Taliban are at least Afghan.

And the US military is not alone fighting uphill in COIN wars. Despite the British Empire failing three times in Afghanistan in the late 1800s and early 1900s and the ruthless Soviet Union failing there as recently as the 1980s, arrogant US government officials unbelievably failed to grasp how difficult it would be to win in a country called “the graveyard of empires.” (The United States also ignored British problems subduing Iraq in the 20th century.) Even worse, in Afghanistan, the United States learned nothing from the same situation in Vietnam; in its history the Vietnamese had fought foreign occupiers from China and more recently from France and Japan before kicking out the United States. In all these conflicts, locals just hit and run and wait for the foreign interloper to get tired and go home. In Afghanistan, the US government hasn’t even been smart enough to do that.

In COIN wars, if the foreign power or client government it backs is not winning, it is losing. Recently, the US generals have told us the Afghan war is stalemated, which is another lie; in fact, the war was lost many years ago. The real lesson learned in Vietnam, Afghanistan and Iraq is that COIN wars are long, brutal and tough for foreign invaders to win. Even if you win, what have you won? Most of these wars are fought in developing countries where nation building is not that strategically important for US security. Lawmakers, “experts” and veterans of these wars should not have been ignorant of these facts and the American public should hold them accountable for any lies they told. More importantly, the public should become more informed about past military debacles and raise its voice to stay out of future likely quagmires.