All eyes on Lebanon meeting in Paris - GulfToday

All eyes on Lebanon meeting in Paris 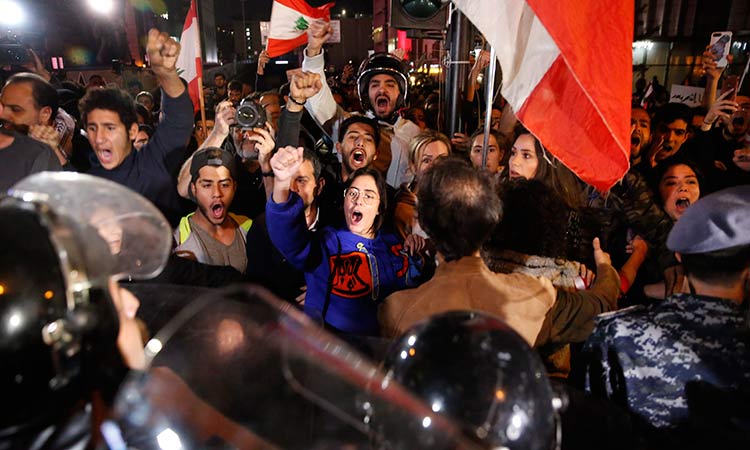 Anti-government protesters shout slogans during ongoing rallies against the Lebanese political class and the financial crisis in Beirut. File/Associated Press

Speaking at last Friday’s symposium in Cyprus on the Syrian Crisis and its impacts on the region, former Lebanese President Amin Gemayel said the rising in his country is “the first time a Lebanese uprising is a national one.

Lebanese are united in the fight against corruption and to establish sovereignty.

There is one slogan… “People have specific objectives.” He is positive about the uprising which is in its 54th day.

This amounts to a revolutionary shift in the mind-set of an old style Lebanese politician who has relied on the post-independence sectarian model of governance to keep his family in power. He is a second generation politician from the Gemayel family; his son Samy, the third generation, is a member of parliament.

The patriarch, Pierre, founded the Maronite Christian Phalange party in 1936 and campaigned for Lebanon’s freedom from France. When Lebanon gained its liberation in 1943, it adopted the corrupting power-sharing deal among the country’s main religious sects which Lebanese now want to scrap.

Amin Gemayel, 77, was president from September 1982 to September 1988, after the assassination of his brother Bashir, who was elected to the presidency under Israeli pressure. At that time southern Lebanon was occupied by Israel, Beirut was reeling from the massacre of hundreds of Palestinians in the Sabra-Chatila suburbs, and Syrian troops were trying to contain conflict between Christian and Muslim warlords.

Gemayel left the country more divided than ever by appointing Maronite army chief, General Michel Aoun as prime minister. This violated Lebanon’s sectarian power-sharing deal which allocated the presidency to the Maronites, the prime ministry to Sunnis, and the speakership of parliament to Shias.

While residing in the presidential palace Aoun used loyalist troops to prosecute private a war against Christian and Muslim antagonists. This continued for a year after the October 1989 signing of the Taif agreement to end Lebanon’s civil war, needlessly prolonging the conflict, which began in 1975.

Aoun’s war killed 900 people and wreaked additional damage to Lebanon’s infrastructure. In October 1990, the US gave a green light to the Syrian army to turf Aoun out of the palace.  He fled to France where he remained until after the Syrians withdrew from Lebanon in 2005. Today there is no Syrian army to oust Aoun who, unlike former President Gemayel, does not accept the uprising as Lebanon’s first nationalist revolution.

Aoun’s previous behaviour is relevant today because he has shown himself to be a major obstacle — reinforced by his Shia allies, Hizbollah and Amal — to the formation of the non-sectarian technocrat government demanded by the mass of Lebanese in the country’s streets and squares. Having been ousted 29 years ago, Aoun is in no hurry to vacate the palace today.

Since the October 29th resignation of Prime Minister Saad Hariri, Aoun has repeatedly postponed a session of parliament tasked with choosing Hariri’s successor and put forward proposals for a new government which have been rejected by the “uprisers,” the name an Egyptian friend gave to his countrymen and women who rose up against 30-year President Hosni Mubarak in 2011.

Hariri initially offered to capitulate to the uprisers over composition of cabinet but this has been dismissed by the political class. In response Hariri ruled out returning as prime minister and Samir Khatib, a businessman with no experience in governance, became the current favourite in the race for the prime ministry.

Aoun has steadfastly insisted that the political parties must nominate ministers, whether politicians or technocrats, and that key “sovereign” ministries — foreign, interior, defence and finance — must be held by veteran politicians.

According to his plan, four or five ministers from the resigned government are to be appointed: Nada Al Boustani of the Free Patriotic Movement (FPM), Salim Jreissati of the President’s quota, Ali Hassan Khalil of AMAL party and Mohammed Fnesih of Hizbollah. Aoun’s deeply unpopular son-in-law Gebran Basil is demanding interior.

It remains clear that Aoun and his allies have no intention of yielding to the uprising and are prepared to risk the economic collapse of Lebanon rather than leave power. Fearing economic and social ruin, a desperate Hariri has appealed to Lebanon’s friends to provide US dollars in cash or credit to enable Lebanon to buy imported food, fuel, essential medical supplies, and raw materials for the manufacturing sector.

The situation has become untenable with dozens of firms laying off employees, Sri Lankan and Filipino household help going to their embassies and demanding to be repatriated, and shops, restaurants and cafes closing. Petrol station owners, bankers and teachers have staged strikes and hospitals have threatened to refuse to admit patients.

Capital controls have prompted importers to limit their orders from external suppliers as they have been unable to secure dollars or make transfers abroad. Unemployment for young people averages 30 per cent for the country but is nearly double that figure in Tripoli in the north, Baalbek, and Tyre and Sidon in the south.

The Lebanese pound, which has remained steady against the dollar for decades, has fallen from 1,507.5 per dollar to 1,930 per dollar. Public debt has soared to $86 billion, more than 150 per cent of GDP.

Lebanon’s ex-colonial champion, France is convening a meeting in Paris on Wednesday with the aim of rescuing Lebanon from the corruption and profligacy of its sectarian politicians. The United Arab Emirates, Saudi Arabia, Britain, the US, Russia, and China are said to be invited. However, they, rightly, demand implementation of reforms before they take the risk of providing aid. But, before reforms can be set in train, there must be a properly constituted government — the chief issue  in dispute between the political class and the uprisers.