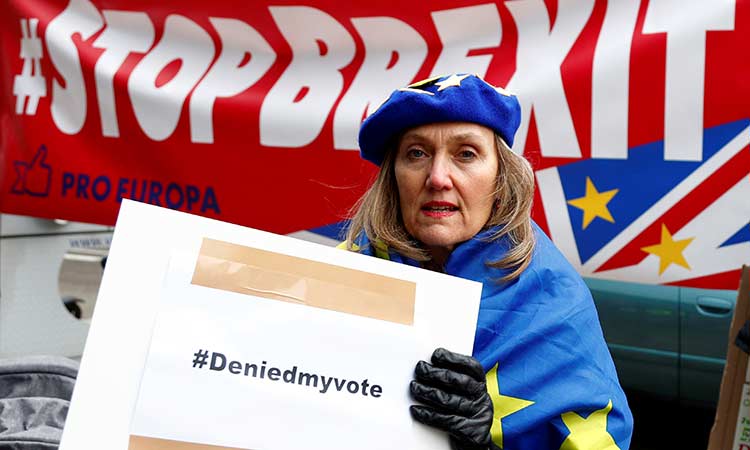 An anti-Brexit protester holds a sign during a demonstration in front of the British embassy in Brussels, Belgium, on Thursday. Reuters

Arguably the most important aspect of this general election’s ongoing debate on Brexit is being almost completely ignored, according to new research.

A survey of all national weekday newspaper and TV-news general election coverage shows that, so far, only around 3 per cent of Brexit-related news content mentions how a UK departure from the EU may affect future European stability and security.

“Despite the fact that it is, without doubt, one of the most important Brexit-related issues, it remains the unacknowledged ‘elephant in the room’ in this so-called Brexit election,” says British-media expert Professor David Deacon, of Loughborough University’s Centre for Research in Communication and Culture, which is carrying out the survey.

Experts on European politics and history are shocked by the imbalance in the media coverage – and are warning of the probably consequences.

“Given our history, we know that failures in European solidarity and stability have had terrible consequences,” says Professor Beatrice Heuser, chair of international relations at the University of Glasgow.

“It is therefore extremely disturbing that this Brexit-flavoured general election is almost completely ignoring the absolutely crucial European stability and security element of the ongoing Brexit debate.

“We don’t have a crystal ball to see into the future – so our only guidance as to what dangers could lie ahead has to be a careful understanding as to how European and world politics have tended to function in the past.

There are at least 16 areas of the European Union (and of immediately adjacent territories) where stability could potentially unravel in the medium- to longer-term future if Britain’s absence and any resultant tensions within Europe were to significantly weaken the EU.

Brexit could also cause substantial instability in Great Britain by increasing the likelihood of Scottish independence, and threatening peace in Northern Ireland by ramping up pressure for reunification with the republic – along with the attendant local unionist reaction. It could also lead to major problems relating to Gibraltar.

Many historians and political scientists believe that, while Brexit will probably not find any imitators in the short- to medium-term future, it will nevertheless gradually change the political balance within the EU. It will further increase the economic centrality of Germany, accentuate differences between France and Germany and increase divisions between southern and northern Europe. What’s more, divisions within the EU (and potential post-Brexit economic and strategic tensions between the EU and the US (and between the EU and Turkey) could very well also weaken NATO. The EU and NATO have been the twin structures which have helped keep Europe largely at peace for so long.

Some historians fear that a weakened EU is likely to lead to further increases in populist nationalism in many member states – and a resultant increase in ethnically based separatism by minorities within some of those countries.

“Any weakening of the European Union will sadly increase the risk of right-wing populist nationalism gaining further support in many parts of our continent,” says a leading authority on modern European history, the University of St Andrews’ Professor Conan Fischer, author of A Vision of Europe, which chronicles interwar efforts intended to overcome the legacy of the First World War and to combat rising nationalism through greater European cooperation.

Post-Brexit, increased European rivalries and identity politics-driven separatism would obviously, in many cases, be very disruptive in themselves – but the proximity of Russia to so many potential instabilities constitutes an additional major problem, experts fear.

“Misjudgements by Russia or NATO concerning open or semi-covert interventions in European flashpoints, or even simple misunderstandings, could have very serious consequences,” says the University of Glasgow’s Prof Heuser.

Any weakening of the EU is likely to lead to a further weakening of NATO, Prof Heuser believes – and that in turn would increase the chances of mistakes being made by Moscow and others.

A little-known but key current development is the growing practice of countries trying to issue passports or ethnic identity cards to entire populations within neighbouring or nearby states. Although the intention is merely to increase political influence rather than to physically seize control of territories, the phenomenon is nevertheless a dangerous hostage to fortune, especially if the EU were to gradually weaken after Brexit.

Major examples of the practice are, for instance, Hungary giving ethnic identity cards to ethnic Hungarian areas of Romania, southern Slovakia, western Ukraine and northern Serbia – and Romanians giving passports to neighbouring Moldovans. Russia is giving passports to people in pro-Russian rebel-controlled territories in eastern Ukraine. Bulgaria is also trying to give passports to citizens of Northern Macedonia and to other Slavic-speaking populations in southern Moldova and eastern Albania. Poland now issues ethnic identity cards to ethnic Poles who are citizens of neighbouring countries like Ukraine, Belarus and Lithuania.

Ethnicity and history are increasingly being used by EU member states and others to increase their influence (and occasionally real political power) in neighbouring EU nations and other countries – and a weaker or politically more divided EU may well accelerate that process.

Research, originally published in The Independent in 2016, shows just how unstable Europe can be in the absence of any effective unifying factor. The research showed that, over the past 500 years, war has dominated the continent for 60 per cent of that time. Courtesy of the EU and its predecessors, and of NATO, Europe has lived in relative peace for the past 75 years. If we exclude those decades from the calculations, almost 70 per cent of the period 1500 to 1945 was scarred by major wars in which millions of Britons and continental Europeans died.

Now, previously unpublished research demonstrates statistically the terrible impact of 20th-century wars on the UK. It reveals that armed conflict has been the single largest cause of death for young Britons over the past 106 years.

The new figures show that almost half (46 per cent) of all deaths of UK men aged between 18 and 34 in that period have been as a result of war.

Historians point out that it’s always been the young who pay most heavily for the political misjudgements which have destabilised our continent. And on the whole, it has always been older politicians who have been responsible for those misjudgements.

“The fact that western Europe’s three major powers – Britain, Germany and France – are all members of the EU has helped Europe to function in a stable way for many decades. Removing the UK from that triangular relationship is likely to change the delicate balances between member states and to ultimately weaken the union,” says Oxford University’s professor of European Studies, Timothy Garton Ash.

“What’s more, if, post-Brexit, there is ongoing tension between Britain and the EU, the UK may be tempted to try to divide and rule in Europe, thus further weakening the continent,” he says. 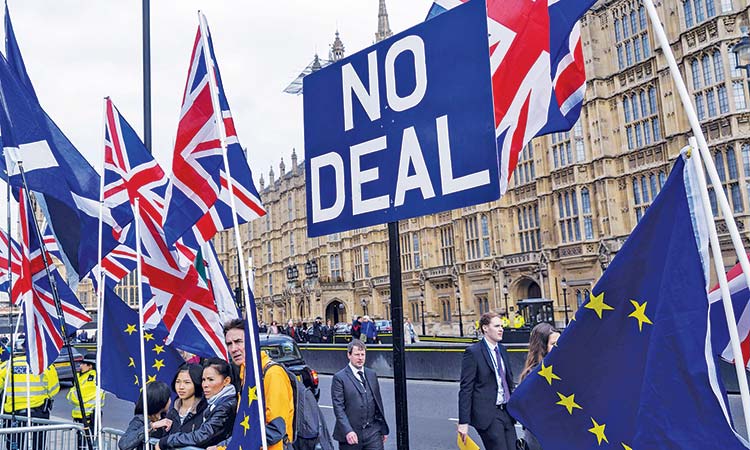 Brexit can’t be ‘done’ in some months

When the time comes for historians to reflect upon the Brexit epic, they won’t only struggle to define the end date — what Boris Johnson calls “getting Brexit done” — but also 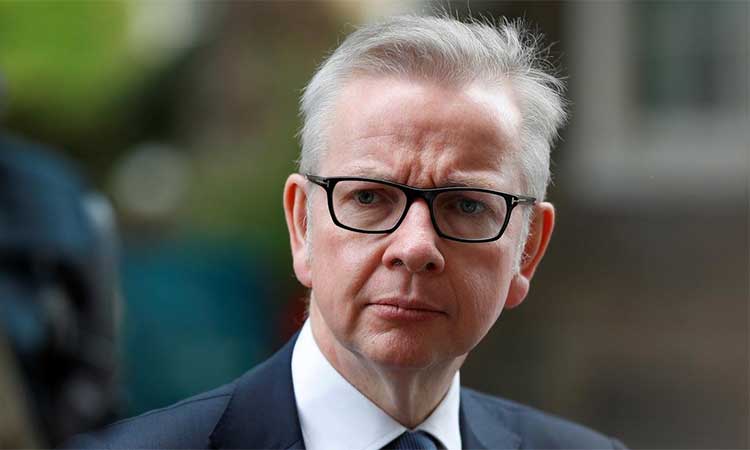