How China responds to Hong Kong protests is crucial - GulfToday

How China responds to Hong Kong protests is crucial 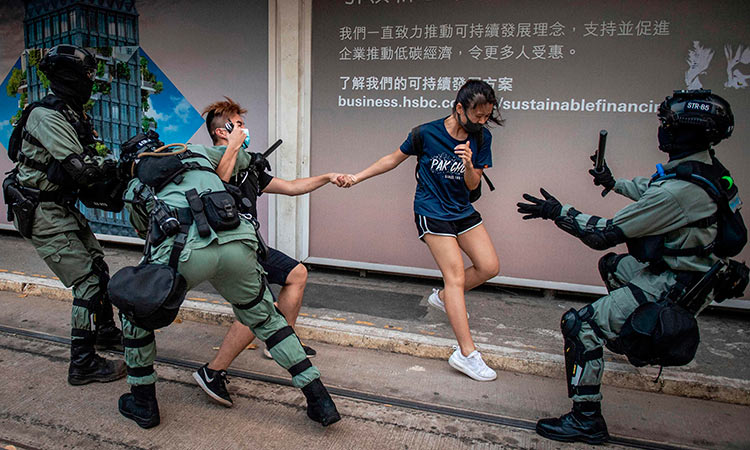 Police chase down a couple wearing facemasks in the central district in Hong Kong in October. File/Agence France-Presse

The daily news bulletins are rarely complete without footage of demonstrators in Hong Kong demanding democracy. There is a danger that people become inured to the pictures, writing them off as a foreign conflict in which we have no stake. Lest we forget, however, the Hong Kong Special Administrative Region of the People’s Republic of China was a British colony for 150 years until we handed it over in 1997.

There is a temptation to sit back and enjoy the excruciating embarrassment being experienced by the authoritarian regime in Beijing. The protests in Hong Kong are a daily reminder that most of the seven million Chinese there don’t want to be integrated into the earthly paradise next door when the present semi-detached status ends; nor will they accept the constraints imposed by the politically inept, unelected, pro-Chinese executive. The horribly dysfunctional politics of the US and the UK no longer look so horrible alongside what the Chinese model has to offer.

For the Chinese Communist Party, there is no easy escape from the embarrassment. To intervene militarily to restore order would be worse. The regime is not squeamish about using violence where necessary, but it will not willingly surrender what moral authority it retains and ruin the positive image it has built up in Asia and Africa, along with the Belt and Road initiative. The criticism – muted at present – over minority issues in Xinjiang and Tibet would intensify. Any illusions that still exist in Taiwan about peaceful assimilation would be shattered, beyond repair. Uncomfortable parallels would be drawn with the USSR’s ultimately futile interventions in Hungary and Czechoslovakia.

But the western world should be careful not to be too smug. Lectures on human rights might have been credible from the mouth of Barack Obama, or even the Bushes, but would be comical from a US president who despises human-rights activists whether at home or abroad. The British are less abrasive but also less important. As for democracy, we should have the humility to recall that whatever benefits Hong Kong may have derived from British colonial rule, democracy wasn’t one of them.

Only the naively optimistic believed that as China grew it would evolve into an Asian version of Scandinavia. From Nixon and Kissinger to Condoleezza Rice and Hillary Clinton, the hard-headed always understood that what was required was engagement rather than conversion; mutual respect rather than harmonisation.

Engagement matters because China is becoming the world’s largest economy (on some measures, already is) and a superpower. It is in our collective interest that the new superpower is inducted into the system of global rules rather than isolated and humiliated. The British played their part with the orderly transfer of power in Hong Kong and then the commercially based “Golden Era” led by the Cameron government in which I played a role as secretary of state for business.

It cannot be denied that the Chinese have been broadly constructive partners to date. They show more sensitivity to the effects on others of financial imbalances and undervalued exchange rates than, say, Germany. They have more attachment to the Bretton Woods institutions – the IMF and World Bank – and the World Trade Organisation than the US (though they have undoubtedly exploited their ‘underdeveloped’ status). They burn a lot of coal but appear to understand the need for global rules to limit greenhouse-gas emissions to curb global warming, unlike the US, Russia and Australia, among others. They did disregard international legal rulings on the South China Sea but so have the British over the Chagos Islands. Until 2016, there was every prospect of China becoming an integral part of the international community.

Trump has changed all of that. His economically illiterate obsession with bilateral trade balances is only part of the story and the Chinese have managed the role of injured party in a skilful and restrained way. The more serious and fundamental problem is that “making America great again” is a barely concealed attempt to stop China becoming great again. The giant, and so far resilient and dynamic, Chinese economy is seen as a threat to American jobs rather than an opportunity for mutually beneficial trade and investment. Behind the economics lie military fears, perhaps dating back to Pearl Harbour and the Japanese. The president has not been slow to make Hong Kong a part of this wider narrative.

The current American paranoia has dangers for Britain which, within the secure framework of the EU, was developing excellent relations with China. Brexit Britain will be more exposed, scrambling for trade deals to justify the newly “independent” trade policy. The Trump regime will offer their old friend Boris Johnson some plausible piece of paper to wave, but there will be a price to pay. That price may or may not include bits of the NHS and chlorine-washed chicken, but it will certainly involve tagging along behind the US in dealing with China. Theresa May’s carefully constructed compromise on Huawei will be an early casualty.

Does Britain have any role to play beyond handwringing and pious statements from Dominic Raab? Absolutely. In the 1990s, the Lib Dem leader, Paddy Ashdown, promoted the idea of offering asylum to Hong Kong residents. It was predictably shot down with horrified headlines about millions of Chinese flocking to our “overcrowded island”. But Britain could take the lead in assembling an offer of asylum to those who fear persecution, alongside other EU countries, the US, Singapore, Japan, Korea, Taiwan, Brazil, Australia, Canada and New Zealand.

The receiving countries would benefit from generally high-quality migrants. The protesters would have less reason to riot if they knew that they had an escape route to fall back on. The Chinese authorities would doubtless welcome a calmer population with fewer malcontents and an escape from the headlines. Why not try it? It would at least show that we care.

Whether or not the west deals with the matter sensibly and sensitively, the ball is in the court of the Chinese authorities. If they choose to treat the Hong Kong protests as simply a law-and-order problem, a challenge from hooligans and subversives to their authority, they will no doubt succeed in the short run, but they will lose in the long run.

The protest leaders can be identified and silenced, but there will be a price to be paid in the alienation of the Chinese diaspora and especially those among the young and educated mainland population who are able to access information on developments in Hong Kong. The old formula of buying off political frustration with material improvements will not work indefinitely.

That is why the smarter Chinese Communist officials – and there are many – will be working out how to learn from places like Singapore how to maintain party control while allowing a degree of choice and plurality. For the “one country” part of “two systems, one country” to endure, these lessons must be applied urgently through a more representative administration in Hong Kong.