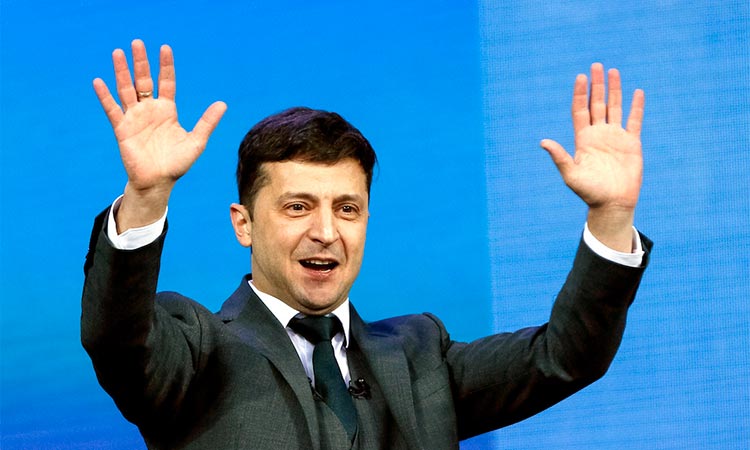 Ukrainian President Volodymyr Zelensky delivered an unmistakable rebuke to President Trump in an interview published Monday by Time and three European news outlets. Then Trump, as is his wont, declared himself totally exonerated.

According to the partial transcript posted by Time, Zelensky mostly discussed the war with Russian-backed rebels along Ukraine’s eastern border. When he got onto the topic of the United States’ role, he started by saying he didn’t want Ukraine to be a pawn in a great-powers game of chess. But then he got into how Trump and other US officials had been publicly labeling Ukraine a “corrupt country” and the difficulties that this causes with global investors and businesses.

“This is a hard signal,” Zelensky said. “For me it’s very important for the United States, with all they can do for us, for them really to understand that we are a different country, that we are different people. It’s not that those things don’t exist. They do. All branches of government were corrupted over many years, and we are working to clean that up. But that signal from them is very important.”

In other words, the chaff thrown up by Trump and his allies in defence of his attempt to persuade Zelensky to announce two investigations that could help Trump’s reelection bid — “Ukraine is corrupt, and Trump was just trying to protect taxpayers’ money” — is at least as harmful to Ukraine’s new housecleaning government as it is helpful to Trump.

But that comment wasn’t the one that got Trump’s attention. It was one at the end of the interview, when Zelensky was asked the $300-million question: “When did you first sense that there was a connection between Trump’s decision to block military aid to Ukraine this summer and the two investigations that Trump and his allies were asking for? Can you clarify this issue of the quid pro quo?”

There’s a great deal of confusion over this precise point. The White House froze nearly $300 million in security aid to Ukraine about two weeks before Trump spoke with Zelensky and asked for “a favour” in the form of those two investigations.

Here’s Zelensky’s response, according to Time’s transcript: “Look, I never talked to the president from the position of a quid pro quo. That’s not my thing.... I don’t want us to look like beggars. But you have to understand. We’re at war. If you’re our strategic partner, then you can’t go blocking anything for us. I think that’s just about fairness. It’s not about a quid pro quo. It just goes without saying.”

There are a million different ways to parse that, but the meaning seems clear: Zelensky really, really, really wants to get out of the middle of this controversy. Yet it’s also clear that he’s not forgiving Trump for delaying the aid approved by Congress, more than 10% of which is apparently still on hold.

Trump, though, offered a completely different read: Breaking News: The President of Ukraine has just again announced that President Trump has done nothing wrong with respect to Ukraine and our interactions or calls. If the Radical Left Democrats were sane, which they are not, it would be case over! — Donald J. Trump (@realDonaldTrump) Dec. 2, 2019.

Nothing wrong? How about “If you’re our strategic partner, you can’t go blocking anything for us”? How about Zelensky imploring Trump to stop driving capital away from Kyiv?

But that’s how Trump operates, counting on people not to take the extra step and read the Zelensky interview for themselves.

Granted, some folks may not be troubled by a president using the power of his office to try to persuade a foreign government to help him win reelection. But even they would have to concede it’s something less than “perfect.”