Yet another painful, serious security failure 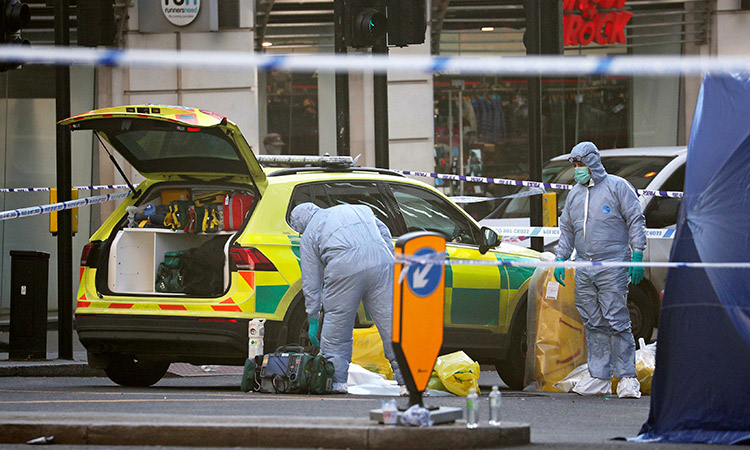 Forensic officers at the scene of the attack on London Bridge. File/Associated Press

Last Friday’s attack in London by a 28-year old man, who had served time in prison for plotting detonate pipe bombs at the City’s stock exchange, demonstrated once again that the Western powers have totally failed to deal with the threat posed by Al Qaeda and Daesh. The latter boasted the assailant had mounted the attack in its name and in response to its call to target countries belonging to the US-led coalition, which fought the movement in Syria and Iraq.

The perpetrator, Usman Khan was a prisoner released on parole and electronically tagged who had been sentenced to at least eight years in jail in February 2012. He had been classified as a hardcore Al Qaeda inspired radical who should never be released but after this sentence was quashed he was freed last December.

Before being identified and detained in 2010 by British intelligence, Khan, then 19, and two other men had also planned to set up a training camp for British Muslims on land owned by Khan’s family in Pakistan-controlled Kashmir. Once they had completed their course they would return to the UK to carry out operations there. They were tracked by British security, their calls monitored and homes bugged, until they were arrested.

Khan had clearly been considered at least partly “cured” of radicalism but this obviously was not the case. He mounted knife attacks — killing two and wounding three — at a Cambridge University-convened conference on rehabilitating offenders. He then fled to London Bridge where he was apprehended by civilians and shot to death by a policeman who believed he was wearing a suicide vest or belt.

This was the first deadly incident in the UK since 2017 when eight people were killed when attackers wearing fake suicide vests used a van to mow down pedestrians on London Bridge before stabbing people at random.

Khan’s radicalism followed a fixed pattern. A British citizen of Pakistani origin, he was subjected to racism and left school without qualifications. During his late teens he spent time with his ailing mother in Pakistan where he was radicalised.  He conceived a plan to impose Muslim canon law, Sharia, in Pakistan-held Kashmir where young men are groomed to take part in the protracted battle against India.

Khan returned to Britain where he promoted his views on the internet and won a following. This apparently gave him a feeling of identity and power.

He found himself among eight like-minded men while living in central England. The police operation which led to their arrests before they carried out any attacks was considered a major coup.

The British authorities are now focusing on Khan’s connections in the Pakistani-Bangladeshi radical underground based in the UK but success in this line of investigation will net little or nothing to stem the tide of religio-cultural radicalism. Western governments have waited too long to tackle Islamabad and Dhaka on the rise of radicalism in their countries or address the issue and provide alternatives to alienated and vulnerable young men and, to a lesser extent, women.

Al Qaeda, the parent of modern radical groups, emerged from the war prosecuted by the US and its allies against the Soviet presence in Afghanistan.  Exploiting any religious community for political ends is always a highly dangerous enterprise because those exploited  have their own agendas. It is significant that Al Qaeda and similar mujahedin groups differed from radicals elsewhere by the fact that they could draw on a large reserve of marginalised and resentful men from around the world.

While Evangelical Christians can, to a lesser extent, count on global brethren for support, few are prepared to fight and die for their cause. Buddhist, Hindu and Sikh radicals have been largely confined to countries where they are rooted.

Once the Afghan war ended, mujahedin migrated to Bosnia, Algeria and their unsettled homelands. Al Qaeda founder Usama bin Laden dispatched an able deputy, Jordanian Abu Musab Al Zarqawi to Iraq following the US invasion of that country with the aim of mounting resistance to the occupation. This group was initially comprised of  Iraqis, but once it had morphed into Al Qaeda in Mesopotamia and Daesh, the movement attracted thousands of foreign radicals to fight in Syria where the West and its allies  tolerated this intervention because these outside powers wanted to oust President Bashar Al Assad — at any price.  The price was high. They took no action until September 2014 when Daesh —  which had already captured cities and towns in western Iraq — seized its second city Mosul.

Inaction had, however, enabled Daesh to establish a false “caliphate” stretching from Raqqa in north-central Syria to Mosul and eastern Iraq. The very existence of such an entity prompted radical-leaning men and women from the world over to migrate to northern Syria and Iraq. While the territorial “caliphate” has been erased, the fact that it thrived for even a few short years continues to grip the imagination of many, particularly vulnerable youths.

The refusal of European and other governments to repatriate citizens who remain loyal to Daesh until its final bastion was captured by US-backed Kurds last spring can only deepen the crisis over radicalisation. Governments cannot simply wash their hands of their nationals and leave them in vast camps in Syria where they face abuse and deprivation and constant indoctrination from Daesh remnants. Children who grown up in these camps are the radical fighters of the future.

Having tried and failed to topple the Syrian government by funnelling foreign radicals into Syria, Turkey has begun to send home some foreign fighters and their families. This is the only solution for them.  The job of de-radicalisation has to be assumed by the countries where they were born and grew up. They cannot simply be dumped in this already conflicted region to rot in what are no better than concentration camps or escape from confinement and take up arms again with Daesh, Al Qaeda, or similar groups. 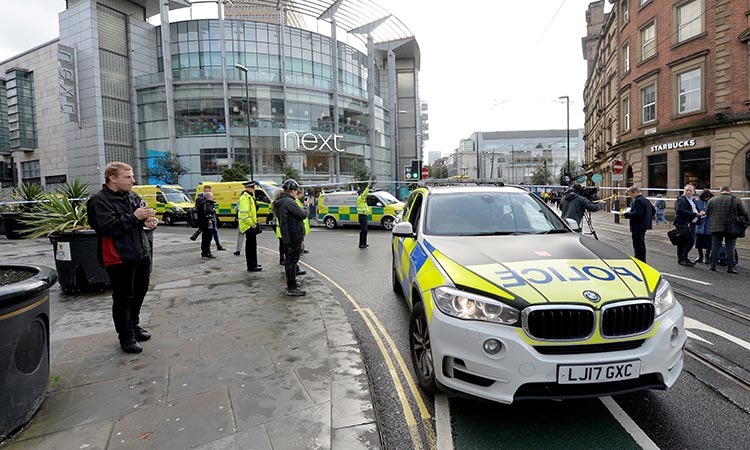 A man arrested for allegedly stabbing several people at a shopping centre in Manchester, northwest England, is being held on terror charges, police said on Friday