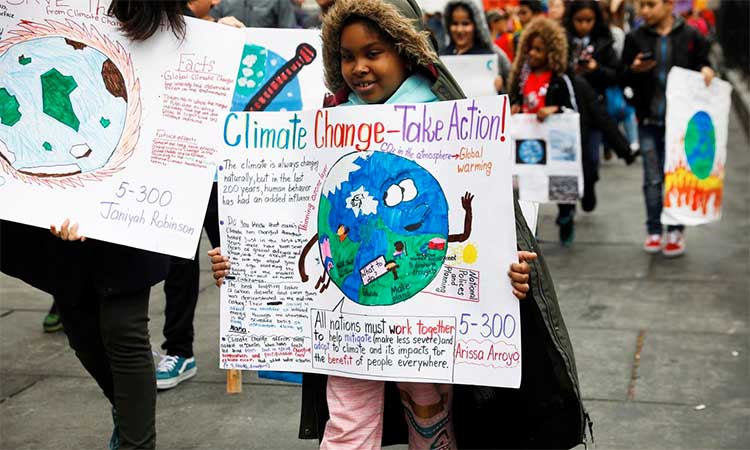 The efforts made by world leaders so far are not enough to tackle climate change crisis.

Peter Cole, Marko Stepanov, Petra Metzger, Ferhat Ulusu, Jeremy Watson, Julian May and Monty Keith were on their 11th day without food. The real urgency of their protest was framed by this week’s bleak Unep announcement that global emissions are still rising fast. It now looks likely that the crucial 1.5C carbon budget will be exhausted within eight years.

The hunger strikers are demanding a filmed hour-long meeting with the party leaders and their backing for Extinction Rebellion’s Three Demands bill in the new parliament. This calls for net-zero emissions by 2025, ending ecological destruction, and a citizens’ assembly to determine the fairest way to do this.

So far, they have met the Plaid Cymru leader, the deputy leader of the Lib Dems, and the shadow chancellor, and are due to meet the Greens’ co-leader on Monday. But just like the leaders’ debate last night, which Boris Johnson failed to attend, the Conservative Party has shamefully refused to engage with the hunger strikers outside their HQ.

This sums up this climate emergency election. On one side you have a climate alliance of various tinges of green opposition parties, all with serious climate-action proposals, while on the other side you have the Tories, promising a zero carbon 2050, but not taking radical measures to reduce emissions in the short term.

While none of the parties had the courage to tackle the destructive consumer society head on, Labour framed their manifesto as a Green industrial revolution, with billions invested in warmer homes, renewable energy, better public transport and a ban on fracking. The Lib Dems and Greens did likewise. The Lib Dems promised £3.7bn year and the Greens £2.5bn for the creation of a national cycleway network.

With a third of the UK’s emissions coming from transport and most trips being under five miles, a national, protected cycleway is crucial to get to net zero, as electric cars only reduce emissions by 50 per cent.

Johnson’s Tory government has decimated the onshore wind, solar and home-insulation industries, making thousands of skilled workers unemployed. Solar installations are down 92 per cent since 2015 and onshore wind 80 per cent since 2017. They propose to give another £20bn in fossil-fuel duty cuts to the diesel and petrol cars poisoning our kids’ lungs and squander £30bn on building new roads, while promising a derisory £7m for cycling per year.

This would not be enough to build even one proposed cycling bridge in the capital, which would cost £600m. Labour, the SNP and the Lib Dems are reticent on what they would do with the nine-year fossil-fuel duty freeze or with the huge subsidies the government is giving to North Sea oil. And while they will all ban fracking, they are silent on whether they will ban new oil and gas fields. Both major parties failed to respond to our requests for comment on either fuel duties or North Sea oil subsidies.

Insanely, global markets are planning $5 trillion (£3.8 trillion) in new fossil-fuel developments over the next decade. Fifteen per cent of this investment is planned by UK banks and oil corporations. The shadow chancellor proposes to delist from the London Stock Exchange those companies which fail to help tackle the climate emergency.

He also proposes a windfall tax on oil corporations. However, none of the major parties propose a ban on new fossil-fuel exploration and investment. They are thus flunking the biggest immediate challenge if we are to have any hope of reaching a zero carbon 2025: oil corporations must immediately switch all new investments to renewables.

Trees and restoration of nature feature strongly in all the manifestos. Tree planting, peat-bog restoration and rewilding are effective means to trap CO2 and restore wildlife, and this is a tribute to the veteran environmentalist George Monbiot promoting the rewilding of our denuded landscapes. Labour proposes 100 million new trees per year, the Greens 70 million, the Lib Dems 60 million, the Tories 30 million and even Nigel Farage promises “millions” of trees.

Almost all the leaders last night refused to answer the question on meat. The Greens propose a meat carbon tax, while Labour promised carbon neutral agriculture by 2040 but gave no details on how to do this.

The Lib Dems and Greens both propose a frequent flyer levy on those taking more than one flight a year, targeting the 70 per cent of flights taken by just one seventh of the population. The Labour manifesto fails to oppose the current UK-wide programme of airport expansion. Johnson’s pledge to stand in front of the Heathrow bulldozers is absent from the Tory manifesto.

Despite all of the above, with the dates proposed for a zero-carbon Britain ranging from 2050 (Tories), 2045 (Lib Dems), 2040 (Labour) to 2030 for the Greens, not a single party delivers the zero 2025 target that Extinction Rebellion hunger strikers know — and latest science indicates — is really necessary.

With the Potsdam Institute warning this week that some irreversible tipping points are now kicking in, this is really our last chance. It seems to me that there needs to be a climate alliance across Labour, the Lib Dems, Plaid, the SNP and the Greens where the leaders urge their supporters to vote for the constituency party best placed to defeat the Tories, whose attitude is shockingly lacking the urgency needed globally to avoid apocalyptic runaway warming. 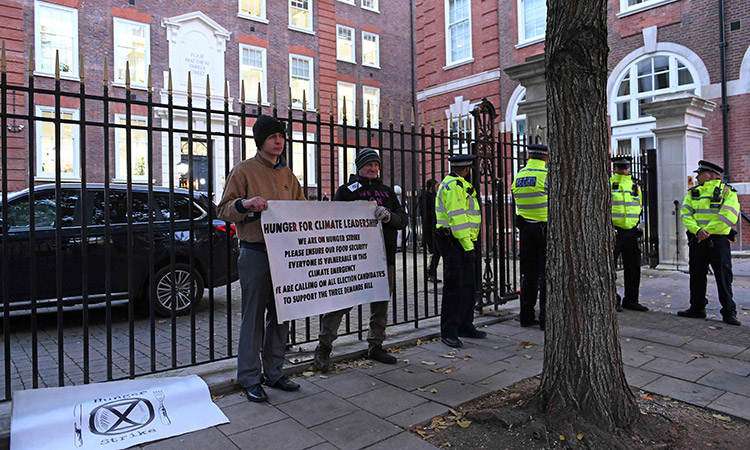 John McDonnell’s pledge to force carbon polluters to delist their shares from the London Stock Exchange exemplifies everything that’s wrong with British politics.