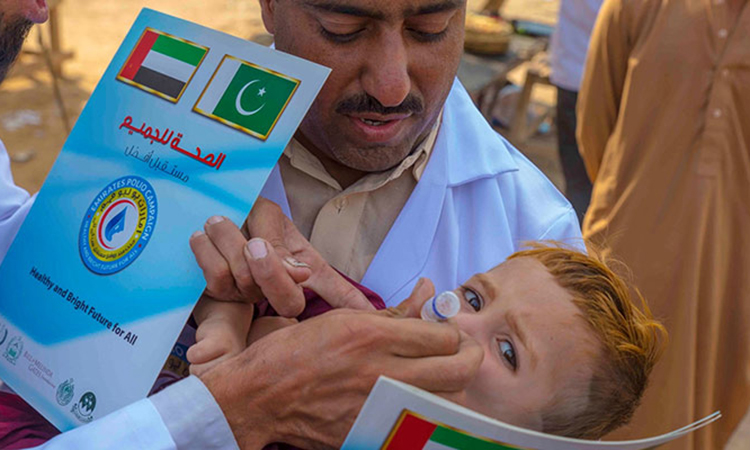 The UAE has set a shining example for the world to follow for polio eradication. WAM

It’s heartening that global leaders who convened at the Reaching the Last Mile Forum in Abu Dhabi reaffirmed their commitment to eradicate polio and pledged $2.6 billion as part of the first phase of the funding needed to implement the Global Polio Eradication Initiative’s Polio Endgame Strategy 2019-2023.

It is also pleasing to note that this pledging has come on the heels of a major announcement last month that the world has eradicated two of the three wild poliovirus strains, leaving only wild poliovirus type 1 (WPV1) still in circulation.

Additionally, Nigeria – the last country in Africa to have cases of wild polio – has not seen wild polio since 2016 and the entire WHO African region could be certified wild polio-free in 2020.

Thanks to the dedicated efforts of health workers, governments, donors and partners, wild polio now only circulates in two countries: Pakistan and Afghanistan.

Polio is a crippling and potentially fatal infectious disease. There is no cure, but there are safe and effective vaccines. Polio can be prevented through immunisation.

As per the World Health Organization (WHO), polio vaccine, given multiple times, almost always protects a child for life. The strategy to eradicate polio is therefore based on preventing infection by immunising every child until transmission stops and the world is polio-free.

As Reem Bint Ibrahim Al Hashemy, Minister of State for International Cooperation, well explained, “Since launching in 2014, the Emirates Polio Campaign has delivered more than 430 million polio vaccines in some of the most remote areas of Pakistan. We remain firm in our mission to reach every last child and believe together we can consign polio to the pages of history.”

Polio workers perform remarkable tasks delivering Vitamin A supplements, providing other vaccines like those for measles and yellow fever, counselling new mothers on breastfeeding, and strengthening disease surveillance systems to anticipate and respond to outbreaks.

Bill Gates, Co-chair of the Bill and Melinda Gates Foundation, has cautioned that although a few polio cases remain to be eradicated in the world, if we stopped eradication efforts now, there could be a resurgence of up to 200,000 cases annually by 2029. The warning deserves serious attention of the world community.

The UAE’s commitment to ending diseases of poverty goes back decades. Sheikh Zayed, the UAE’s Founding Father, was among the first international leaders to join in this effort, as Gates points out.

As a result of the initiatives — led by His Highness Sheikh Mohamed Bin Zayed Al Nahyan, Crown Prince of Abu Dhabi and Deputy Supreme Commander of the UAE Armed Forces —millions of children globally have received the necessary vaccines to prevent the spread of polio.

According to the UAE-Pakistan Assistance Programme, UAE PAP, which partners with the Sheikh Mohamed polio initiative, 418,956,226 drops of polio vaccines were delivered to Pakistani children from 2014 and up until September 2019.

Sheikh Mohamed has, since 2011, personally donated $167.8 million to support global efforts to eradicate poliomyelitis, with a focus on remote regions in Pakistan and Afghanistan.

The UAE certainly deserves praise for remaining steadfast in its commitment to eradicate the disease.