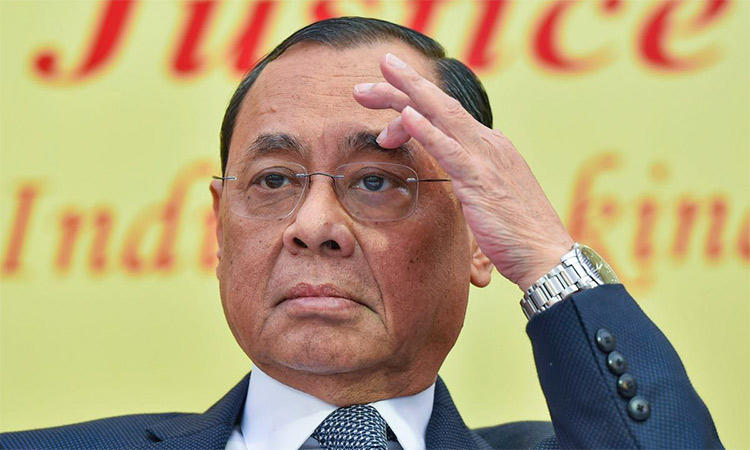 How will Ranjan Gogoi, the Chief Justice of India, who has just retired after delivering judgment in a series of high-profile cases, be remembered?

While declining requests from reporters for interviews last week, he praised the media in general terms for showing maturity during the Supreme Court’s trying times.

Since he did not contextualise the observation, one can only guess what action — or lack of action — by the media earned those gratifying words.

The mainstream media, in turn, is singing paeans of him, drawing attention in particular to what they regard as his path-breaking judgments.

One of them is the unanimous judgment of the five-bench led by him on the Ayodhya dispute which had played a major role in polarising society and boosting the electoral prospects of Prime Minister Narendra Modi’s Bharatiya Janata Party.

The court gave the land where Babri Masjid, which was pulled down by Hindutva activists had stood, to Hindus to build a Rama temple and offered Muslims an alternative site to build a mosque.

Reacting to the verdict, former Supreme Court judge AK Ganguly said, “I am perplexed and disturbed. The Constitution gives rights to everyone and justice has to be given to everyone but in this case justice has not been done to minorities.”

Since large sections of social and political opinion have accepted the judgment in the hope that it will remove a festering sore, Justice Gogoi and his colleagues are entitled to some credit even though they have laid themselves open to charges of deviating from established principles of law and justice and endorsing majoritarianism.

There was a similar deviation in the majority judgment on the petitions seeking review of the court’s 2018 verdict on women’s right to pray at the Sabarimala shrine in Kerala with a celibate deity.

Under the court’s tradition, a review petition is heard by the same bench that had given the judgment. Since Justice Misra had retired, Justice Gogoi took his place.

Justice AM Khanwilkar, who was one of the four judges who gave the majority verdict, changed his position. Did he do so in the light of any new fact or point of law brought up by the review petitioners? Or was he influenced by the protests that had followed the judgment? We do not know.

With Justice Gogoi taking a position different from that of Justice Misra and Justice Khanwilkar changing his mind, the review resulted in a 3-2 verdict in favour of barring women’s entry into the shrine.

Quick, unexplained changes in the views of judges and courts are not conducive to strengthening people’s faith in the justice system.

The court needlessly complicated matters further by deciding not to give effect to the 3-2 verdict against women’s entry.  Instead, it clubbed the issue with those of Muslim women’s entry into mosques and genital mutilation practice among Parsi women and ordered that a larger, seven-judge constitution bench hear them together.

Early in his term a woman court assistant, in a sworn statement sent to all judges, had made a complaint of sexual harassment against Justice Gogoi. He said it was part of a plot to deactivate the court.

He got himself cleared of the sexual harassment charge through an inquiry by a panel appointed by himself.  There was no action against the complainant for making a false allegation and trying to derail the court.

While the Constitution envisages a system of mutual checks and balances by each pillar of the state, a critic has observed, the Supreme Court under Justice Gogoi appeared more like an ally of the political executive.

The worst part of the controversial legacy left behind by Justice Gogoi is the pusillanimous manner in which he dealt with the issue of arrest of social activists dubbing them as urban guerrillas and sat on petitions questioning the constitutional validity of the Centre’s high-handed actions in Jammu and Kashmir.

He took up the activists’ issue but kept postponing it and finally dropped it unceremoniously. When the first petitions from Kashmir came before the court, he said he wanted to give the Centre more time to restore normalcy. Eventually he took up a couple of peripheral matters but left the main petitions for his successor to handle.