Republicans have a firm plan for the public impeachment hearings - GulfToday

Republicans have a firm plan for the public impeachment hearings 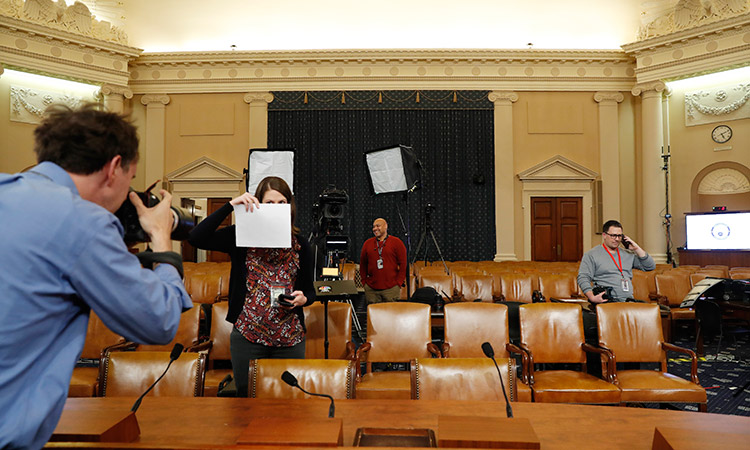 A photographer sets a white balance in the hearing room where the House will begin public impeachment inquiry hearings on Wednesday on Capitol Hill in Washington. Associated Press

With fewer than 18 hours remaining until House Democrats begin presenting a case for impeaching a sitting president for the third time in American history, the battle lines have been drawn.

Over the past seven days, impeachment investigators with the House Foreign Affairs, Intelligence, and Oversight Committees have released the transcripts of interviews and depositions conducted with 11 witnesses — all current or former Trump administration officials — in hopes of filling in the picture of how $391 million worth of military aid meant to help Ukraine fight off a Russian invasion was held up last summer.

More of that picture was filled in Monday afternoon with the release of a transcript of House investigators’ interview with Laura Cooper, currently Deputy Assistant Secretary of Defence for Russia, Ukraine, and Eurasia. Cooper, a career civil servant who has called the Defence Department home since 2001, explained to investigators how important the funding for Ukraine — a “front-line state facing Russian aggression” — was in order to push back against Russia’s incursions into its sovereign territory. Providing military aid, both monetary and in the form of lethal defensive weapons like the Javelin missile — built specifically to destroy the kinds of Russian tanks that Ukrainian soldiers are now facing — was “within the US national interest,” Cooper told investigators.

Cooper also told investigators that “all of the senior leaders of the US national security departments and agencies” were “unified in their view” that the aid to Ukraine was “essential.”

Cooper’s testimony may figure prominently in future hearings, but Americans who tune into almost any television station on Wednesday will hear testimony that could be far more damaging to Trump in the short-term. Sometime after 10am, Ambassador William Taylor and Deputy Assistant Secretary George Kent will appear in the ornate hearing room normally used by the House Ways and Means Committee. They will raise their hands and “swear to tell the truth, the whole truth, and nothing but the truth.”

Taylor is a respected career diplomat who headed the US mission in Kiev from 2006 to 2009. He returned to Ukraine this year at the request of Secretary of State Mike Pompeo, who brought him out of retirement to replace Marie Yovanovitch. Yovanovitch was seen by Giuliani and others as an impediment to Trump getting what he wanted from Ukrainian officials.

Democrats are calling Taylor as their first witness in hopes of him providing compelling testimony on how Giuliani, Ambassador to the EU Gordon Sondland, and Special Envoy Kurt Volker — the self-described “three amigos” — operated “an irregular, informal channel of US policymaking with respect to Ukraine,” with the goal of pushing Ukrainian President Volodmyr Zelensky to investigate Joe Biden and his son. It has been suggested that Rudy Giuliani worked alongside others on a “campaign of slander” against Marie Yovanovitch, which ended in her being removed from her post.

While Republicans have demanded to call a number of conspiracy theory bêtes noires as “defence witnesses” — including Hunter Biden and the unnamed whistleblower whose identity still preoccupies Trump’s thoughts — those demands have been firmly rebuffed by House Intelligence Committee Chairman Adam Schiff. Schiff vowed that his investigation “will not serve as a vehicle to undertake the same sham investigations into the Bidens or 2016 that the President pressed Ukraine to conduct for his personal political benefit, or facilitate the President’s effort to threaten, intimidate, and retaliate against the whistleblower who courageously raised the initial alarm” and he’s staying true to his word.

Republicans will instead attempt to defend Trump by heeding his exhortations to focus on his “perfect” July 25th phone call with Zelensky, rather than trying to rebut any of the testimony offered by Taylor, Kent, or Yovanovitch herself when she appears on Friday. A GOP strategy memo described that phone call as showing “no conditionality or evidence of pressure”, so expect that to be said during the public hearings as well.

They’ll also try arguing that Ukrainian officials weren’t aware of the fact that the military aid had been withheld — despite Cooper’s testimony to the contrary. And they will focus on Trump’s state of mind by arguing that the president “holds a deep-seated, genuine, and reasonable scepticism of Ukraine due to its history of pervasive corruption”, and that “any reluctance on the President’s part to meet with President Zelensky or to provide taxpayer-funded assistance to Ukraine is entirely reasonable”. Specifically, they will say, it is reasonable because of conspiracy theories alleging that Ukraine — not Russia — interfered in the 2016 election and they did so in order to help Hillary Clinton.

Finally, they’ll argue that the only reason Democrats are looking towards impeachment is because “unelected and anonymous bureaucrats disagreed with the President’s decisions and were discomfited by his telephone conversation with President Zelensky”.

That last argument might backfire on Republicans, according to former Republican congressman Carlos Curbelo, who told me that “there are risks” for Republicans who want to “excite the base” by attacking any of the witnesses, engaging in theatrics or pushing lines of questioning based on conspiracy theories.

The hearing format Schiff’s committee will use, which gives Schiff and Ranking Member Devin Nunes 45 minutes for them or their counsel to ask questions before any other members can weigh in, “is certainly less conducive to the types of theatrics that we’ve become accustomed to seeing,” he said.

Moreover, Curbelo predicted that the witnesses will have no patience for conspiracy-mongering: ”I think they’re going to dismiss those theories and ideas quickly but respectfully. From what we can tell, all of these witnesses are thoughtful and sober, and that’s the type of performances I think we can expect. None of these witnesses are ‘never-Trumpers’ or have been overtly political in any way, so it will be difficult to attack them. They’ve all had distinguished careers in public service.”

Curbelo posited that if Democrats play their cards right, they could potentially reach Republicans who aren’t among the 30 to 40 members he called “unconditional allies” of the president by successfully using the open hearings to move public opinion.

“It’ll mostly depend on the public’s reaction to the testimony that we’re all about to see,” he said. “There’s a high cost that Republicans who defy their base have to pay, so they’ll be following public opinion very closely.”

He added those members who are persuadable have been “laying low” because “they’re privately uncomfortable with what the President has done and the position they’ve been put in.”

“There will certainly be party unity at the beginning of this public phase of the inquiry, but that could change as more facts emerge and if public opinion shifts against the president.”

Another former Republican House member who served during the impeachment of Bill Clinton, Tom Davis, said that at least at the outset, the similarities between recent events and the Clinton impeachment are “eerie.”

“Republicans thought they had Clinton dead to rights — he’d lied under oath, perjury is a felony… and they went on their merry way but didn’t move public opinion, and it was a party-line vote,” Davis recalled. “Democrats retracted to saying that it was serious but didn’t rise to the level of impeachment, and I think that’s how this is shaping up [with Republicans] now.”

Democrats need to move public opinion in a big way if they’re going to avoid the result Davis and his Republican colleagues had in 1999, he said: ”They need to move Republican public opinion because with most of these members, their primary voters are firmly behind the president — (Democrats) need to be talking to them. The facts speak for themselves, but they don’t talk like Republicans — they talk like Democrats about this, and right now they haven’t reached the Republican base in any meaningful way.”

“Sometimes putting things on TV can move people, but we’ll see,” he added. 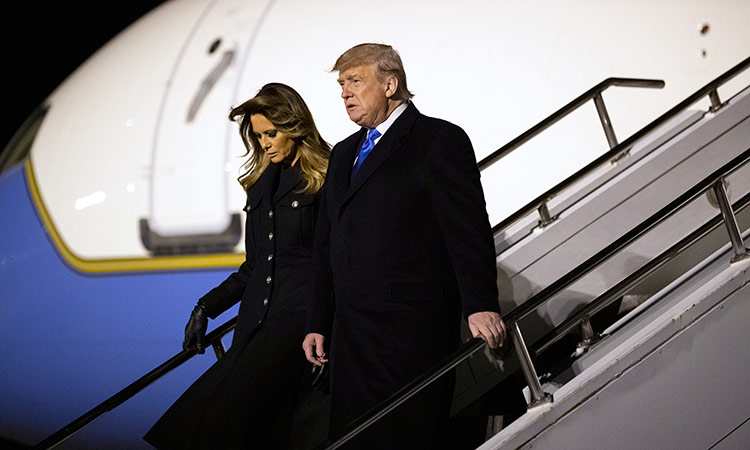 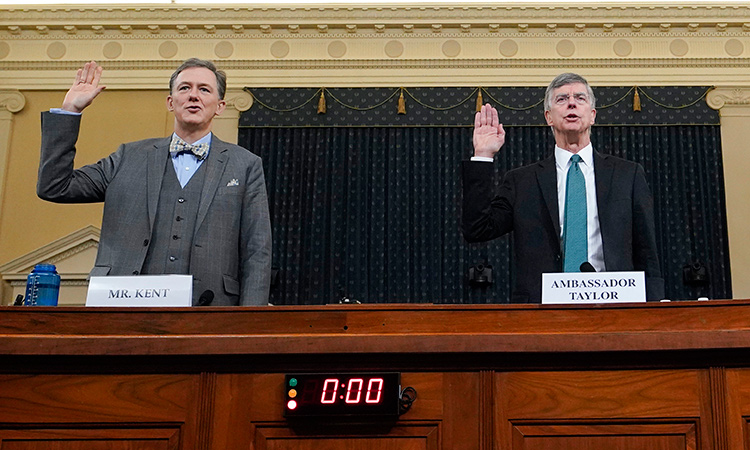