US, Israel’s nefarious moves to shut down UNRWA - GulfToday

US, Israel’s nefarious moves to shut down UNRWA 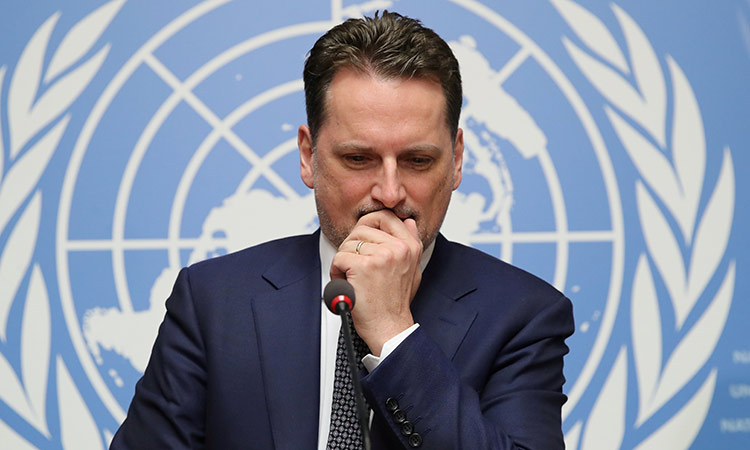 Pierre Krahenbuhl, Commissioner-General of the United Nations Relief and Works Agency for Palestine Refugees in the Near East (UNRWA), attends a press conference in Geneva, Switzerland. File/Reuters

The UN agency caring for Palestinian refugees is facing its greatest challenge in its precarious 70 years of existence. Last week the Commissioner General of the UN Relief and Works Agency (UNRWA) Pierre Krahenbuhl resigned after being accused in a confidential internal UN investigation of mismanagement, nepotism, discrimination and inappropriate behaviour.

On the most important issue as far as the cash-strapped agency is concerned, preliminary findings of the report exclude fraud or misappropriation of funds by Krahenbuhl. This is according to a statement released by the office of UN Secretary General Antonio Guterres. Krahenbuhl’s resignation followed five months of leaks from the UN Office of Internal Oversight Services.  These precipitated the resignations of his deputy Sandra Mitchell and chief-of-staff Hakam Shahwan, both of whom left in July. The report concluded the alleged misconduct of persons who have stepped down is “an enormous risk to the reputation of the UN” and argued “their immediate removal should be carefully considered”.

Former UNRWA official Christian Saunders has been appointed as interim commissioner general and charged with “implementing a management plan to strengthen the agency, particularly in the areas of oversight and accountability,” stated Guterres’ office. Accusations of mismanagement and the high level resignations are certain to colour the coming debate in the UN General Assembly over renewing UNRWA’s three-year mandate which expires on June 30, 2020. It would be highly significant to discover who leaked information on the secret investigation and why. The reason is certain to be political: opposition to the very existence of UNRWA.

It is hardly surprising that Israel’s ambassador to UN Danny Danon declared that “charges related to the agency’s conduct makes it clear that there is no solution except to close it.”

The Trump administration has been trying to do just that since 2018 when it cancelled all US funding to UNRWA, depriving the agency of one-quarter of its $1.2 billion budget. The administration’s objective was to force UNRWA to “de-register” offspring of the 750,000 refugees driven from their homes by Israel in 1948 and diminished by death. This would leave a fraction of the 5.5 million Palestinians dependent on UNRWA and end the need for UNRWA. Donald Trump’s so far secret “Deal of the Century,” which is meant to bring peace to the region, proposes paying billions of dollars to host countries to settle Palestinian exiles and grant them citizenship. External investment in the West Bank and Gaza would provide an “economic solution” to dependence on UNRWA and take Palestinians off the agenda and minds of members of the international community. Trump expects Saudi Arabia and its Gulf neighbours to provide the billions of dollars needed to finance his deal.

Krahenbuhl successfully countered Trump’s effort to compel UNRWA to close by ending $365 million in funding. The commissioner general imposed austerity on the agency and toured the globe to raise the money Trump denied. When Gulf Today visited UNRWA facilities in Jordan in October 2018, staff members were filled with praise for Krahenbuhl and his staff and said employees at all levels of the agency were working to rescue it. Krahenbuhl sharply criticised the administration for trying to disappear the Palestinians. His pro-Palestinian stand made him a target for the allies of Israel and Trump’s entourage, particularly his son-in-law Jared Kushner who authored the “Deal of the Century.”

In addition to ending the US commitment to UNRWA, Trump recognised Jerusalem as Israel’s capital and moved the US embassy from Tel Aviv to the holy city, cancelled another $200 million in US assistance to Palestinian projects in the West Bank and Gaza, and extended US recognition to Israel’s annexation of the Syrian occupied Golan Heights. The latter move provided a precedent for formal US diplomatic recognition of the extension of Israeli sovereignty to the West Bank.

The aim of the game of Trump and Israeli Prime Minister Binyamin Netanyahu is to end global acceptance of the Palestinians as a people. The very existence of Palestine as a country and its recognition by more than 100 governments, and of Palestinians as a nation is a major challenge to the legitimacy of Israel. Consequently, Israel and its US backers have argued for decades UNRWA should be shut down.

The agency was created in December 1949 by a resolution of the UN General Assembly following the Palestinian Naqba when ethnically cleansed and impoverished Palestinians were camped out in Gaza, East Jerusalem, the West Bank, Jordan, Lebanon and Syria. As it was established by the General Assembly, UNRWA is answerable to this body.

The task of looking after hundreds of thousands of Palestinians was far beyond the ability of the International Committee of the Red Cross and other humanitarian agencies. The UN High Commissioner for Refugees (UNHCR), also set up in 1950, dealt initially with European refugees from World War II. It branched out to take action in other conflicts across the world.

UNRWA provides shelter, basic food and health, educational, and welfare services to 5.5 million Palestinians living under Israeli occupation and in the main host countries, Syria, Jordan and Lebanon. UNRWA’s current troubles coincide with war in Syria, economic upheaval in Jordan, popular revolution driven by corruption and economic meltdown in Lebanon and a protracted political crisis in Israel. In Syria there are 552,000 UNRWA registered refugees, 2,205,736 in Jordan, 475,075 in Lebanon, 828,328 in the Israeli occupied West Bank and 1,386,455 in Israeli besieged and blockaded Gaza.  Large percentages of the refugees in Gaza and Syria rely on UNRWA for food baskets as well as services while those elsewhere receive health care, schooling and other benefits. Consequently, closing down UNRWA is impossible and would only cause great suffering if the agency was not replaced by another international organisation. Neither the host countries nor the Israeli occupier of Palestine can afford to assume responsibilities carried out by UNRWA.

The country which has benefited most from UNRWA’s existence has been Israel which created the Palestinian refugee problem and has never been pressured to repatriate, compensate or provide for the people it has made homeless. Instead, the international community has shouldered the burden of caring for Palestinians made refugees by Israel’s colonial enterprise.