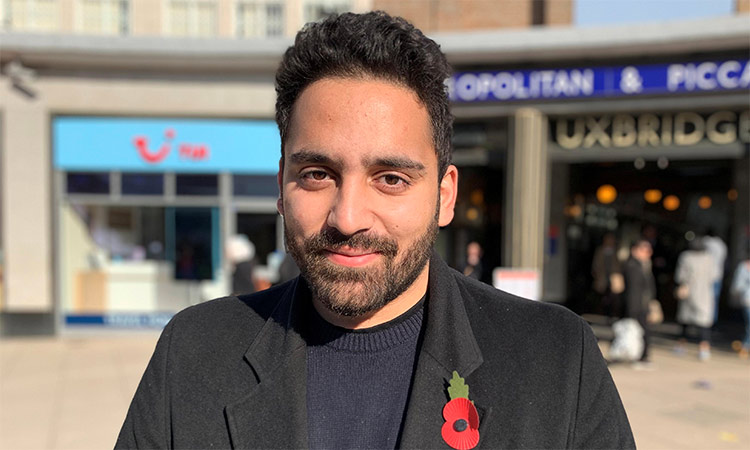 We are just days into the winter general election campaign, and the Conservative Party has already shown itself to be out of ideas and out of touch — and soon it will be out of time too. My campaign to unseat prime minister Boris Johnson in Uxbridge and South Ruislip has only strengthened my belief that the Tories are disturbingly distant from the everyday reality of the communities they claim to represent.

The Tories have stumbled through several disastrous media appearances in the first week of this campaign, but it is not the probing of journalists and political commentators that fills them with dread. What they fear most is the political awareness of the general public: the eyes and ears that hold their every word and every action accountable and threaten their grip on power.

For the Tories, politics has long been an arena where they can exercise their false sense of entitlement to wealth and power. But for many of us, it is a matter of life and death.

When news of the Grenfell tragedy first broke, I wasn’t just hoping for the safety of hundreds of my fellow human beings — I was praying for the family of a girl I went to school with. Many of us know somebody who lost a loved one that day, if we did not do so ourselves. For some, it was a reminder, and for many, it was a wake-up call, of how systemic failures have culminated in a society that places lavish profits before the lives of people.

It also conveyed to us the message that the sight of a tower block being easy on the eyes of the wealthy is a greater priority than securing the safety of the people for whom it is home. We should not be surprised, then, at Jacob Rees-Mogg’s utterly shameful comments. The Tories have long perpetuated the concept of the “undeserving poor”, and the notion that suffering and impoverishment is down to deficiencies in one’s own self. Indeed, this has been fundamental to their sinister justification of economic inequality, as well as their ludicrous born-to-rule entitlement.

I support Stormzy’s passionate call for Rees-Mogg’s resignation, but Andrew Bridgen’s staunch defence of his widely condemned colleague shows that this is no case of a minister-gone-rogue. While many Labour activists and candidates like myself proudly hail from council estates, more Conservative MPs could do with visiting one and seeing the misery they’ve caused. The Conservative Party’s agenda of austerity has had catastrophic consequences beyond social housing. The underfunding of our National Health Service — the inhumane waiting times, cancellations, closures, staff shortages, unaffordable drugs — has cost lives. And yet, our NHS is under threat of drastic dismantling at the hands of the Tories, many of whom are presumably too wealthy to be concerned with protecting a public service that is critical to the lives of millions of ordinary working people.

We are facing a deadly acceleration from creeping privatisation to a full-scale sell-off through Boris Johnson’s Trump-deal Brexit, where our poorest and most vulnerable face being held hostage through extortionate drug bills levied by greedy American pharmaceutical billionaires. Despite his transparent promises, Johnson frankly cannot be trusted with our nation’s greatest asset, simply because it stands contrary to the big business interests the Conservative Party serves by putting public need before corporate greed. The Labour Party believes that the NHS represents all that is great about our country, and is fighting to extend its principles to all our public services, from housing, to education right through to transport. While the Tory-led Department for Work and Pensions is quick to brand people “fit for work”, on 12 December Britain is going to cast them out as unfit to serve.

The Conservative Party may be seeking a parliamentary majority, but they serve the interests of an elite, super-rich minority alone. If you want to see the future Johnson is looking to build, look no further than the crushing levels of medical debt in the US, and take a moment to absorb Rees-Mogg and Andrew Bridgen’s comments.

I’m running to unseat Boris Johnson because I know that the Tories offer a bleak future for the working class. I can’t sit by while ordinary people are held responsible for their own suffering by the right-wing elite, who consider themselves born to rule over us. On 12 December, join me in taking the first step towards rebuilding Britain for the many, not the few.