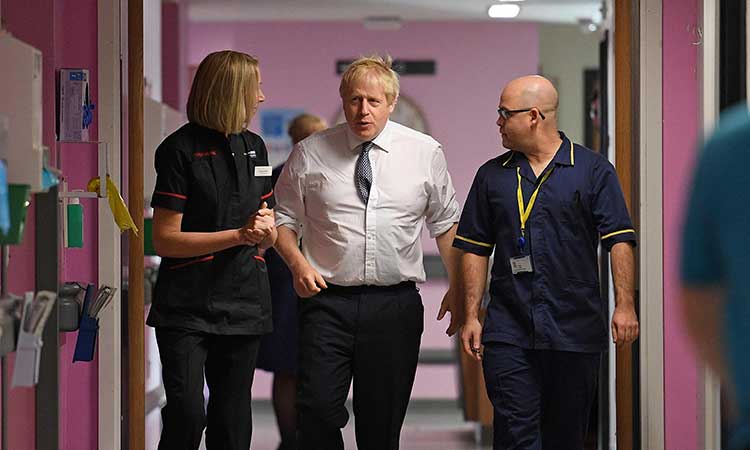 In hindsight, it is clear to see that the age of liberal democracy, lasted between two historic lectures.

The first was given by the French philosopher Benjamin Constant at the Paris Athenaeum in 1816 and titled “On The Liberty of the Ancients Compared With That of the Moderns.”

The second, which has come to be known as “Not Another One”, was delivered in 2017 on a front doorstep in Bristol by a woman called Brenda, whose surname has sadly been lost to history.

In Paris, Constant argued that it was fine for the ancient Athenians to spend all day shooting the breeze about politics in the public square.

They had 20,000 slaves doing the grunt work for them. The ancients even actually enjoyed what he describes as, “The constant exercise of political rights, the daily discussion of the affairs of the state, the disagreements, confabulations and agitations.” Anything, he said, to fill the day.

The modern citizen, on the other hand, is far too busy with his own personal affairs, “that he does not wish to be distracted from them other than momentarily, and as little as possible.”

When the business of government intervenes in his life, he says, “This intervention is indeed always a trouble and an embarrassment.”

In a way, the politicians of this new age — Cameron, Johnson, Corbyn — deserve credit for inventing a new politics that truly captures the spirit of the twenty-first century zeitgeist, specifically the daily struggle of ordinary people to balance both work and childcare commitments.

Welcome to the toddlocracy. These are the times in which the hopes and dreams of the people have been snatched away, subjugated in favour of tending to the needs of a not merely a new class but almost a new species of demanding, incoherent and fundamentally incapable semi-human people.

Really, General Election 2019 only starts vaguely to make sense when you see it for what it is, namely the extension of the Look Who’s Talking franchise into the 24 hour news channels.

What has this week been after all, if not a Sunday family gathering, in which the already worn out adults are interrupted by a sudden terrifying crash from the playroom?

And now the door has swung open and out they’ve all rushed in a cacaphonic tornado of howls and screams and tears and finger pointing and he said and she said and no but you said and mummy said and daddy said and now, with a sigh so weary it is almost suicidal, it is up to us to sift through through the blood and the lies and the broken glass.

To establish some sense of right and wrong, even though we know that it’s not going to make a blind bit of difference to the ultimate destination, which is very clearly going to be A & E.

Is it even worth writing it all down in chronological order? That the people who are, don’t forget, actually campaigning for your vote, think the people who died at Grenfell were too stupid to save their own lives, that women who don’t want to be raped should keep their knickers on, that their own party is too racist to vote for, that it’s okay for a Labour Party candidate to celebrate the death of Tony Blair because, well, people celebrated the death of Hitler, didn’t they?

In the end, it will be us having to walk into a polling booth and actually give one of this lot our backing. Suddenly, having a vote feels like having a voucher for a high street store that’s gone into administration. You could vote for Labour, but then again, its own deputy leader has quit because he knows the cause is beyond salvation. And another one of its former ministers, Ian Austin, is telling you his own party is racist, sympathises with terrorists, is friends with Britain’s enemies, is not fit to run the country and you should vote for the Tories instead.

At time of writing, two Labour candidates have been stood down over allegations of antisemitism. Another, Zarah Sultana, has previously claimed she would “celebrate the death of Tony Blair.” These, in her defence, were surgically targeted comments, but already they have led to unforeseen civilian casualties.

Jane Aitchinson, the Labour candidate for Pudsey, paused for fully thirteen seconds live on air when asked about these comments by the BBC’s Emma Barnett, taking her time to come to the considered, and carefully nuanced view that, “Well, people celebrate the death of Hitler, don’t they?”

Even in this new age of politics, some of the old golden rules still apply. When you’re explaining whether or not you should celebrate the death of your most successful ever leader, you’re probably losing.

Or are you? Because, all of a sudden, it’s distinctly possible that actually, you’re losing when you’re not explaining. And you’re not explaining, specifically, because Sky’s Kay Burley is asking you ten questions in a row, about whether Jacob Rees-Mogg was right to say that the Grenfell victims lacked ‘common sense,’ about a video you’ve doctored, about various blatant lies that have been told by the prime minister, about the cabinet minister that’s had to resign over the collapse of a rape trial less than twenty minutes into the campaign.

But you are not there. You, in the form of party chairman James Cleverly, are not explaining because you are represented on live television by an empty chair, and you are standing fully fifteen feet away, just off camera, having refused to sit in it. So should you take the advice of an actual former Labour minister and vote for the Tories instead? Well before you do that, you should at least consider what former Tory ministers Ken Clarke, Dominic Grieve, Philip Hammond, Nicky Morgan, Rory Stewart and Amber Rudd, to name a but a tiny few, are up to. Which is standing down because they know full well their own party has gone mad.

Perhaps, who knows, there is some secret pact underway, to get this terrible election called off because there’ll be no one left to stand in it, like a football match that’s abandoned after the referee has had to send eight players off for violent conduct.

The only other plausible explanation for what’s happening is that we are witnessing a special, f*ckwits only Battle Royale, in which each contestant has for some mysterious reason assumed the winner is the one who dies first.