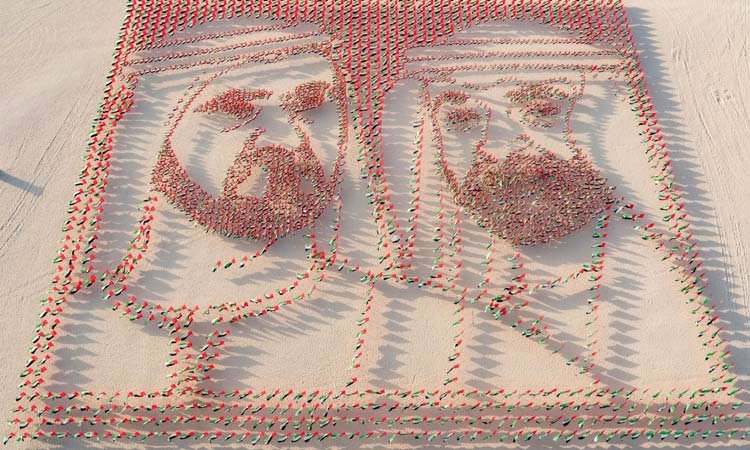 An aerial view of the Flag Garden. WAM

I was simply impressed by the huge photograph of our respected leaders on page 5 (“4,500 UAE flags create portraits of leaders, Nov.4, Gulf Today). The ‘Flag Garden’ has thousands of flags arranged in such a way so as to carve portraits of His Highness Sheikh Mohammed Bin Rashid Al Maktoum, Vice President, Prime Minister of the UAE and Ruler of Dubai and His Highness Sheikh Mohamed Bin Zayed Al Nahyan, Crown Prince of Abu Dhabi and Deputy Supreme Commander of the UAE Armed Forces.

The flags are aligned on the sand to depict an image of the two charismatic leaders together.

I saw the video on your Twitter site, it simply looks spectacular.  As Mona Al Marri, Director General of the Dubai Media Office, said, “This year’s edition of Flag Garden aims to honour nation’s leaders and acknowledge their role in guiding the UAE’s development into a nation that is shaping the future of the world. This initiative is in line with our objective of communicating Dubai’s unique identity and aspirations through innovative initiatives.”

As she avers, the iconic visual image conveys the UAE’s role in nation building.

The Flag Garden is an annual event that attracts visitors throughout the period of celebrations.

Their Highnesses the Supreme Council Members and Rulers of the Emirates sent separately cables of condolences to the Custodian of the Two Holy Mosques, King Salman Bin Abdulaziz of Saudi Arabia,