Warren may have an elitism problem in the 2020 election - GulfToday

Warren may have an elitism problem in the 2020 election

I understand Elizabeth Warren’s appeal. The words “Harvard,” “law” and “professor” fill me with so much joy, I like them in any order. A “professor of Harvard Law,” a “law professor at Harvard,” even a “law Harvard professor” makes me swoon.

Better still, Warren has plans. She has experience. She walks everywhere in a way designed to show that she does not want to be late for class.

But I also know that the reason I like Elizabeth Warren is that we are both members of the intellectual elite. We are people who listen to audiobooks while getting our steps in. We not only read newspapers, we write for them.

Many people do not like us. The main factor in Donald Trump’s win wasn’t economic anxiety. It wasn’t sexism. It wasn’t racism. It was that he was anti-elitist, and people loved to cheer the downfall of anyone in the media, science, academia or government.

Hillary Clinton represented Wall Street, academics, policy papers, Davos, international treaties and people who think they’re better than you. People like me. Trump represented something far more appealing, it turned out: beating up people like me.

In one poll, conducted a month before the 2016 election, only 24% of voters disagreed with the statement, “The real struggle for America is not between Democrats and Republicans but between mainstream America and the ruling political elites.” Only about half of Americans now think colleges do any good, and more than half of Republicans say they have a negative effect on society.

That’s not a new thing. My grandfather cried when Dwight Eisenhower beat Adlai Stevenson, who was called an egghead because he was smart and indeed had a bald head shaped like an egg. The 1828 election ended the reign of enlightenment-influenced founders in an election between “John Quincy Adams who can write and Andrew Jackson who can fight.”

Whereas people like me love the fact that Warren has a plan for everything, her competence doesn’t have universal appeal. If you were on a school playground and announced, “I have a plan for that,” it had better be a plan for how to escape from 40 kids determined to beat the crap out of you.

Warren, of course, understands this problem — as she understands everything. Unfortunately, her attempts at cloaking her elitism aren’t effective. On New Year’s Eve, Warren posted an Instagram live feed in which she said, “Hold on a sec, I’m gonna get me a beer,” which was the worst impersonation of a non-elite since John Kerry entered an Ohio grocery store and asked, “Can I get me a hunting license here?”

That Warren felt she needed to prove something to voters who choose a president based on whom they would want to have a beer with saddens me. (And yes, “whom” was the grammatical word choice in that last sentence.) If beer-ability had been a factor in 1860, Abraham Lincoln couldn’t have gotten elected. Our greatest president said drinking made him feel “flabby and undone,” which probably didn’t make him very popular at a frat party.

I wish we lived in a time when smart, progressive leaders like Warren were embraced. But far-right nationalism is imperiling democracy all over the world. We need a plan for stopping autocracy if we ever hope to be able to fix the problems Warren talks about. And the plan that worked in the 2018 midterm involved choosing Democratic candidates who were centrists, veterans and convincing beer drinkers. So until this populist surge subsides, we elite are going to have to do what we always do in times like this: stay in the background, come up with plans and move to Boston. 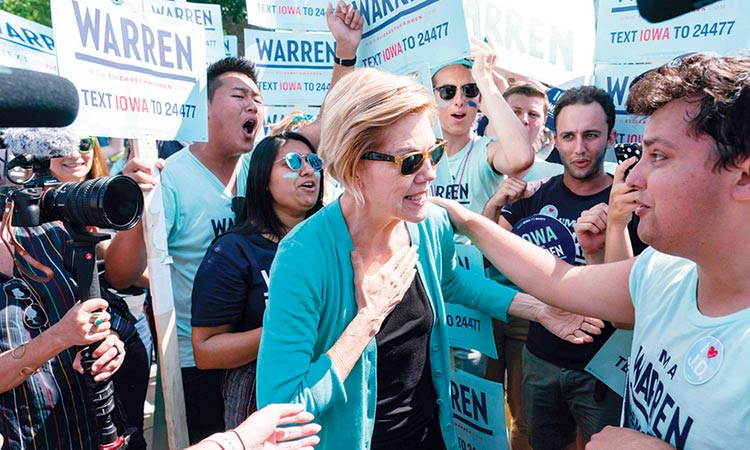