Mulvaney: From being Washington reformer to chief of graft - GulfToday

Mulvaney: From being Washington reformer to chief of graft 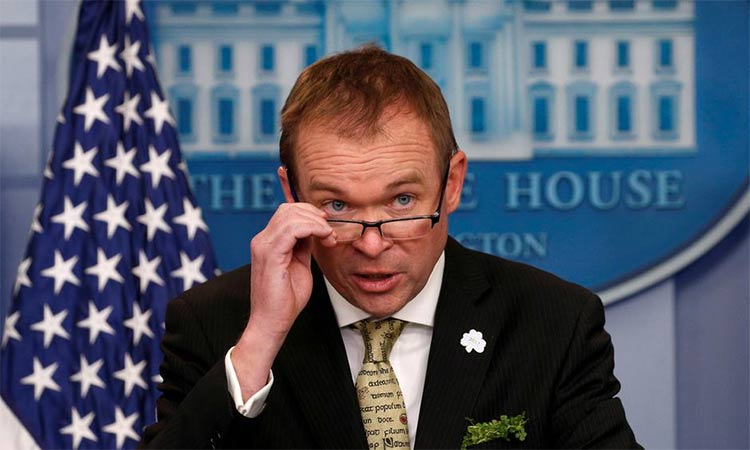 In 2008, days after political newcomer Mick Mulvaney won a seat in the South Carolina state Senate, he told a local newspaper that many voters had suggested that he run for the US House seat held by Democrat John Spratt instead. “I couldn’t stop laughing,” Mulvaney said. “I’m perfectly happy being in the Senate.”

But within a year, Mulvaney was not only challenging Spratt, he defeated him handily in 2010 on a message of reforming Washington and slashing federal spending. “There’s a few things I just think we all believe,” he said in one campaign ad. “We cannot continue to spend money we don’t have.”

That shirt-sleeved, bookish reformer, who talked to voters at a diner over drinks in Styrofoam cups, arrived in Washington in 2011 on a tea party wave of cutting bureaucracy and ending corruption.

But some nine years later, after a six-year stint in the House and a quick ascent into the Trump administration, the Mulvaney who promised to end deficits has expanded them. The man who swore he’d cut budgets juiced his own. And the shirt-sleeved, small-business owner that South Carolina sent to D.C. is now at the center of an international corruption scandal he not only tolerated, but may have championed.

If you’re surprised, in the words of Mulvaney himself, get over it.

Mulvaney’s road to this incredible moment — of the reformer now possibly in need of reform — began in the days after Donald Trump won the White House. According to a Politico profile titled “Mick the Knife,” Mulvaney quickly reached out to Speaker Paul Ryan to ask that he recommended him to Trump as director of the Office of Management and Budget. A Freedom Caucus founding member, Mulvaney was known and respected in conservative circles as a real-deal, small-government tax cutter.

Although Trump was never known as a conservative at heart, appointing Mulvaney put hard-liners on the right at ease that he had someone on the budget who could be trusted behind the wheel. And Mulvaney did indeed recommended massive cuts to Trump’s first budget — for nearly every federal agency except his own. While most agencies took a major haircut, I reported at the time that OMB got a 7.7% increase in the White House budget request. The extra $8 million was proposed to go for an additional 30 full-time staff positions, which put the total number of staff at OMB at 495.

As Mulvaney continued to recommend cost-reducing reforms like adding work requirements for welfare and major cuts to entitlement programs, his own shop seemed to be immune from those measures. After he took on the additional role as acting director of the Consumer Financial Protection Bureau, he set about in an effort to change the agency’s name to take the focus from “consumer” to bureaucracy. Mulvaney consistently conflated personal and official benefits to the president; US foreign policy and American campaign priorities; and negotiation and threats. It left some incredulous members of Congress wondering whether he and this White House even know the difference between right and wrong anymore. And if they do know the difference, whether they care.

Later, Mulvaney put out a statement walking back the “quid pro quo” comment, but the damage was done. On his own radio show later, Sean Hannity wondered aloud, “What is Mulvaney even talking about? I just think he’s dumb, I really do.” The music played off with the show’s tagline, “Draining the swamp ... one corrupt politician at a time.”

No matter what Mick Mulvaney says, don’t get over it, America. There is a difference between right and wrong. We have laws that that govern politicians’ behaviour, especially when they can’t govern their own. Don’t ever get over it.