Mark Field steps down, but fight is far from over - GulfToday 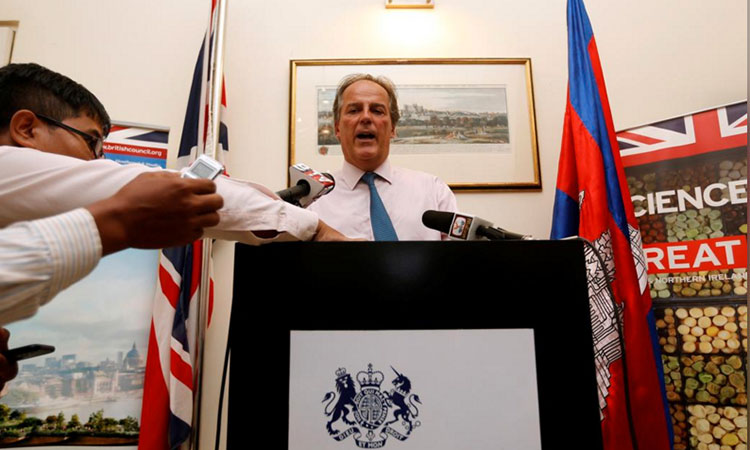 Mark Field at a press meet.

Their aim? To physically stop Mark Field, the Conservative MP who grabbed a peaceful female protester by the neck and kept his job, from entering the building.

Field was set to attend a constituency selection meeting to discuss whether he would stand at the next general election. He couldn’t get in, so was led around the back of the building by a team of suited staff. The activists, dressed in red dresses, in tribute to Janet Barker, the woman who Field manhandled on camera at a black-tie dinner in July, stormed through the lobby to confront him.

Some hours later, Field announced that he would not be standing in the next election. In his statement, he cited the political divisions around Brexit as the reason he would give up his 20-year career in the House of Commons. However, we believe there were other factors behind his decision.

Thanks to months of campaigning from Women’s Equality Party activists — including myself, one of five survivors of male violence standing for WEP in the upcoming election, and his constituency opponent — his position as an MP who has faced no consequences for a violent act has become utterly untenable.

Our approach — including two previous red dress protests, a petition for Field to be recalled, two searing billboard campaigns and the extensive media coverage over our selection as candidates — has created such a stir that parties can no longer ignore our demands.

What we want is simple: for constituents to have the right to sack an MP who is found guilty of harassment, abuse or violence by an independent investigation. At the moment, under the Recall Act 2015, they do not have this power.

It’s hard to argue with such common sense and, already, we have started negotiating with the main parties to change their ways and fully commit to ending harassment and abuse in Westminster for good.

It is clear that our work is having an effect, as we edge ever closer to a snap election being called. Steven Saxby, the Labour candidate in my constituency, has been deselected, suspended by his Party and placed under investigation for sexual harassment — as have a number of other Labour figures.

We are waiting to see results in Dover, too, where we are standing against Charlie Elphicke, who is currently suspended from the Conservatives and on bail for three charges of assault. It will be interesting to see if he dares to contest his seat. My prediction is another Brexit-related excuse and a quiet exit that doesn’t draw attention to just how incredible it is that he still has a job, given the severity of the charges he is facing.

We will also contest Luton North, against suspended Labour MP Kelvin Hopkins, who is subject to an investigation into sexual harassment that has dragged on for two years and is yet to reach a conclusion. We will contest Bury South, against independent MP Ivan Lewis, whose resignation from Labour meant an investigation into allegations of sexual assault, and the investigation was left unconcluded. And we will stand against Jared O’Mara in Sheffield Hallam, who is still sitting as an MP after a series of catastrophic failings including, by his own admittance, the sexual harassment of a young female member of his staff. As with Mark Field, we are confident that we will make our point heard.

Make no mistake, however — this has not been easy. As a survivor of male violence, I and the other Women’s Equality Party candidates have exposed the suffering caused by our deeply traumatic experiences over and over again, to highlight just how important it is that Westminster leads by example to tackle systemic abuse and misogyny.

Our country is in crisis. One in four women experience domestic violence, and one in five will be raped between the ages of 16 and 65. Despite this, conviction rates for reported sexual assaults are at an all-time low of 1.7 per cent. Refuges and rape crisis services continue to face funding cuts, specialist services are threatened with closure and survivors on the brink of suicide face months of waiting to access counselling support.

If our representatives — the individuals who vote on the very legislation that is meant to tackle this violence — are not held to account for their own violence and abuse, how is anything ever going to change?

Field stepping down is only the beginning: we will not stop until all MPs found guilty of harassment and abuse are removed from power.