Uncertainty remains only certainty on Brexit 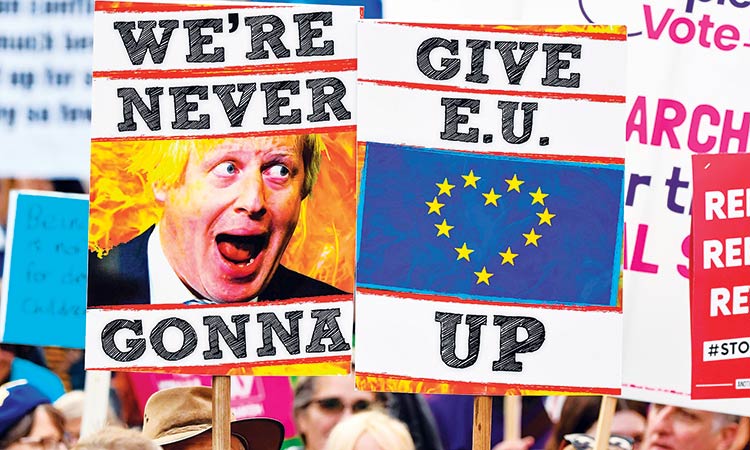 Demonstrators hold placards and EU and Union flags as they take part in a march by the People’s Vote organisation in London. Agence France-Presse

With British lawmakers voting to force Prime Minister Boris Johnson to ask the European Union (EU) to delay Brexit yet again and the premier insisting that Britain must leave on Oct.31, the tortuous Brexit process seems to be heading in no clear direction.

The 322-306 voting by MPs to back former Conservative MP Oliver Letwin’s amendment to buy extra time beyond the Oct.31 deadline comes as a major blow to Johnson as it means he has to ask the EU now to delay Britain’s departure.

Now Johnson’s government will be back before Parliament on Monday trying to muster support for the divorce deal reached with EU.

The delay also means Johnson is required by law to write to EU leaders by late Saturday night to request a three-month extension to the Oct.31 Brexit deadline, something he vowed he would never do.

If he does not write the letter, Johnson can expect to find himself in court. A government lawyer earlier reportedly told a Scottish court that Johnson would comply with the law.

Three years after the country voted 52-48% to leave the European project, many Britons are clearly annoyed with the whole Brexit argument and just want the process to end.

However, there are several others who remain angry that Britain is leaving the EU and want that reversed.

In fact, tens of thousands of pro-EU protesters from across Britain wielding banners, placards and flags converged on parliament on Saturday, erupting in cheers as MPs forced the government to ask Brussels for another Brexit delay.

The division within society also became obvious as a counter-protest by Brexit supporters draped in the British flag was also staged in Westminster, with rival demonstrators verbally sparring with each other in the shadow in parliament.

Johnson has already tried twice to get an early general election, to allow him to win back a majority in parliament. But he needs the support of the opposition Labour party to call one. Labour insists it will back an election only when the threat of a “no deal” Brexit is off the table.

If Parliament approves the Withdrawal Agreement Bill in time, Britain could still leave by the end of October. The government plans to introduce the bill next week and could hold late-night sittings of Parliament in the hope of getting it passed within days.

Johnson’s predecessor, Theresa May, failed three times to get lawmakers behind her Brexit plan.

If an extension is granted and the October 31 deadline is pushed back three months or longer, it is likely that Brexit opponents will have the chance to carefully scrutinise all aspects of the deal and perhaps find more ways to slow the process.

The developments have put EU in a fix too, with the European Commission urging Johnson’s government to quickly explain how it wants to proceed with Brexit preparations after losing another parliamentary vote.

Spokesperson Mina Andreeva made it clear that Brussels takes note of the vote in the House of Commons on the so-called Letwin Amendment meaning that the Withdrawal Agreement itself was not put to vote. “It will be for the UK government to inform us about the next steps as soon as possible,” she has tweeted.

The situation is so tricky that even if Boris Johnson complies with UK legislation obliging him to request that Brexit be postponed again, nothing obliges the other 27 European Union leaders to respond immediately.