Cummings spent his life fighting white supremacy, but in his last days he was denied the peace he deserved - GulfToday

Cummings spent his life fighting white supremacy, but in his last days he was denied the peace he deserved 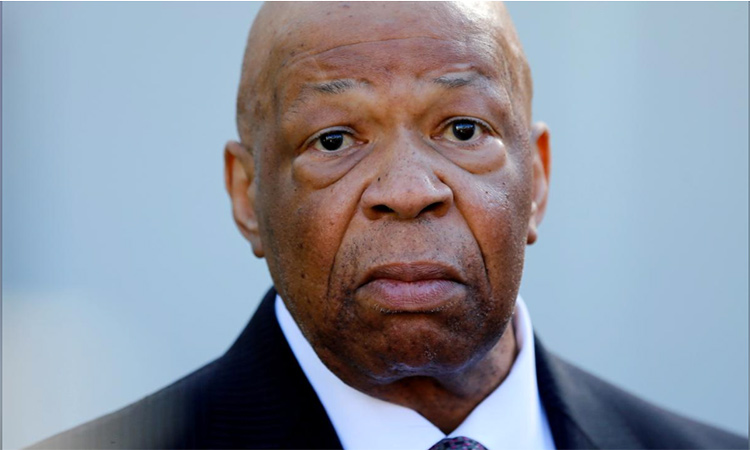 Democratic Congressman and celebrated civil rights leader Elijah Cummings died early on Thursday morning, October 17th. His last days were spent at a hospice centre in Baltimore, where he was receiving care for “complications concerning long-standing health challenges,” his office said in a statement. Cummings was 68.

In the wake of his death, many media outlets linked the Congressman to President Donald Trump in headlines and content — either focusing on Cummings’ strong opposition to his presidency, his role in the impeachment inquiry against Trump, or Trump’s racist and derogatory attacks on Cummings. In one headline, The Daily Beast referred to the Congressman as a “Trump foil.” Most of these stories mention Cummings’ love and advocacy for his hometown of Baltimore, Maryland, while also focusing on the fact that President Trump once referred to Baltimore — a nearly 65 per cent black city — as a “disgusting, rat- and rodent-infested mess.”

On the one hand, it is necessary to speak about these topics. The country deserves to know what impact Cummings’ death will have on the impeachment inquiry, for instance. And Trump should not be able to praise Cummings on this day while escaping accountability for his past comments.

But for many black people, it is depressing to see Elijah Cummings’ death linked to his response to Trump’s chaos. For us, he was so much more than that. Furthermore, the focus on Trump after Cummings’ death is a painful reminder of the way our black elders are denied the rest they deserve in death.

The son of black sharecroppers, Elijah Cummings spent his last days fighting for justice in the midst of one of the most racist, corrupt presidential eras this young country has seen in recent years. But his work was more than just fighting against the current evil in our office. He was a Howard graduate, an experienced lawyer, and the holder of 12 honorary doctoral degrees. And he was more than even this labour, also. He was a father, and a husband, and a friend — not merely a “Trump foil.”

Furthermore, Trump isn’t worthy of the focus he’s receiving today. While Cummings was studying to become a lawyer to help his community, Trump was being sued for discriminating against black tenants. When Cummings was first elected to the House of Representatives, Trump was allegedly assaulting a magazine columnist in a department store fitting room. Trump is a man who has accomplished nothing. Nothing but bigotry and discord.

One way that black people are dehumanized in death is when others reduce our worth to the fervor with which we fought our enemies, without reflecting on the brokenness of a society that forced us to fight so fervently.

Elijah Cummings spent almost his entire life fighting white supremacy. But in his last days, he was denied the peace he deserved.

In this way, our society failed him. They promised him that the moral arc of the universe bends towards justice, but allowed the universe to regress and entrench itself deeper into evil. Yes, he should have been resting in his last days, but instead he was fighting Trump. The least we can do is not make Trump the focus of his legacy. At Trump’s former lawyer Michael Cohen’s hearing before Congress, Cummings addressed him and said: “When we’re dancing with the angels, the question will be asked: In 2019, what did we do to make sure we kept our democracy intact?”

To keep our democracy intact, I want to see our political leaders – especially our white political leaders — work to ensure that the next black elder, the next giant of the civil rights movement, is not forced to pass into the next world under the spectre of impending fascism. I don’t want to see the same evil that beat them with sticks, chased them with dogs, barred them from voting follow them into their obituary.