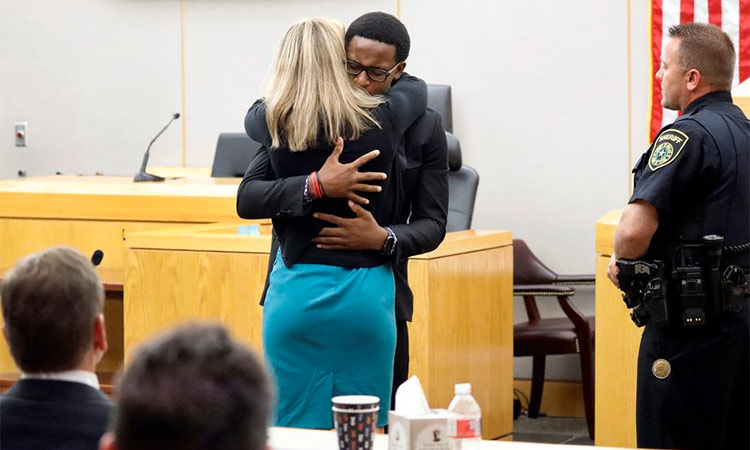 It is with some combination of dread and resignation each morning that I open up my internet browser and confront the headlines of the day.

The sad reality is most of the news is bad. And whether it’s about crime, politics or culture, the themes are often the same. It seems that people everywhere are angry, hateful and bent on the destruction of others.

Maybe that isn’t novel; bad things tend to make news. We like reading about evil, I guess.

But the constant stream of anger and sorrow wears on the soul. And it feels like the stories we need to hear — the ones that remind us of our common humanity, that allow our minds to transcend the sorrows of this world, that illustrate compassion, forgiveness and respect for others — are increasingly few and far between.

So we should consider ourselves lucky to have three stories in as many weeks, about the power of human love, all having taken place very close to home.

The first tale of human decency played out just over two weeks ago in north Fort Worth when a caregiver left an infant girl with the firefighters of Fire Station 38.

The state’s Baby Moses law makes it possible for a mother or other guardian to leave an infant fewer than 60 days old at a designated safe space without question.

Not everyone will see the act of leaving a child at a fire station as an act of compassion. Some will view it as abandonment. But true abandonment looks very different. It looks like the case of Baby Jason in Arlington, who only days earlier was found in a suitcase near a trash compactor. Or the case of the baby found in a trash can in an Applebee’s in Irving two months ago.

Instead of taking the easy way out, the mother of the baby girl left at Fire Station 38 showed her child remarkable grace, and in turn she deserves as much from all of us. She not only gave her child life, she gave her an opportunity to live a good life with a family able to care for her. It was a profound act of love and compassion, the kind we don’t often hear about.

But we did witness another story of love last week, this one in a Dallas courtroom. There, Brandt Jean, the younger brother of Botham Jean (who was shot and killed in his own apartment last fall), showed us what true forgiveness looks like.

Instead of using his victim impact statement as an opportunity to berate his brother’s killer, Jean told ex-cop Amber Guyger that he loved her “as a person,” that he “wants the best” for her. He asked her to give her life to God and in a moment that shocked the courtroom, he asked the judge if he could embrace her.

Few people are capable of such presence of mind in the wake of tragedy. And far fewer are able to forgive the perpetrator behind their own personal sorrow.

Jean’s extraordinary gesture has provoked both admiration and frustration. But my guess is that it frustrates only those for whom an act of such profound love is truly unattainable.

Because for most of us, the decency that stems from loving those we might otherwise hate is not only possible but necessary.

Which brings us to our last story of love, this one a little lighter but no less important.

An image of President George W. Bush and comedian Ellen DeGeneres seated together at last Sunday’s Cowboys game went viral, sparking criticism of DeGeneres, who is liberal and gay, for being in the company of a conservative politician. While she could have apologised or equivocated, as so many celebrities do, she chose instead to use her talk show monologue as an opportunity to share a message of tolerance.

“I’m friends with a lot of people who don’t share the same beliefs that I have,” she explained. “When I say, ‘Be kind to one another,’ I don’t mean only the people that think the same way that you do. I mean be kind to everyone.”

It’s ironic that coming out as friend to an ideological opponent is just as polarizing as coming out as gay 20 years ago. It shouldn’t be. Fortunately, DeGeneres was bold enough to remind us what true decency looks like.

So three cheers for the good news of late. It looks like Texas is leading the nation in lessons of love.