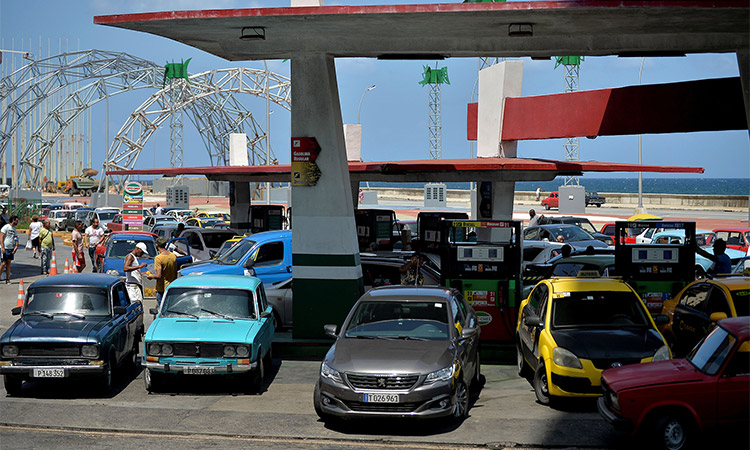 Drivers line up to get their tanks filled at a petrol station in Havana, Cuba. File/Tribune News Service

In Cuba after the collapse of the Soviet Union, and the end of its generous subsidies, fuel was so scarce that many people stopped driving and the government imported thousands of Chinese bicycles. The crisis trickled down to nearly every aspect of life, bringing blackouts, food shortages, even a vitamin deficiency thought to be the cause of a mysterious neurological condition that struck more than 50,000 people.

Known as the Special Period, that era of hardship and severe rationing began in 1991. It finally came to a close at the end of the decade, in large part because oil-rich Venezuela and its leftist leadership came to the rescue.

That lifeline has been severely pinched over the last several years as Venezuela sinks deeper into economic and political chaos, leaving many Cubans wondering whether the dark days of the 1990s could return.

“I had to wait an hour and 25 minutes to get a taxi this week,” said Camilo Condis, an advocate for small businesses. “There’s a lot of worry about fuel. We don’t know what’s going to happen.

“We’ve really been affected — from students to workers who depend on transportation,” the Havana resident said. “Some of the universities are only offering classes two to three days a week now.”

With fuel shipments dwindling, long lines at gas stations have been a fact of life for most of the summer, and in recent days they have become a fixture at bus stops because routes have been suspended to conserve diesel.

Cuban President Miguel Diaz-Canel appeared on state television last month to announce austerity and energy-saving measures in the face of what he called “temporary” shortages.

Mining operations and other projects that consume large amounts of energy have been temporarily halted. Work hours have been adjusted to reduce the need for air conditioning and lights. More people have been allowed to work from home.

Diaz-Canel said that “constant negotiations” with unnamed entities to boost fuel supplies this month have failed. He said domestic oil production covers about 40% of the country’s energy needs — enough to keep the lights on.

Historically, the rest has come through a barter arrangement in which Cuba sends doctors, teachers and military advisors to Venezuela in exchange for oil. But daily oil shipments have been cut roughly in half as the Venezuelan economy has collapsed, said Jorge Pinon, director of the Latin American Energy Program at the University of Texas at Austin.

A single oil tanker arrived in Cuba on Sept. 14. Diaz-Canel said that October deliveries were guaranteed. He promised that if blackouts become necessary, they wouldn’t be of the intensity of the 1990s.

“We are not in a Special Period,” the president said.

He blamed the fuel shortages on sanctions imposed by the Trump administration this year to pressure Cuba to back off its support for Venezuela. Some companies have decided to stop carrying Venezuelan oil to the island rather than risk the freezing of any assets under US jurisdiction.

The sanctions follow a series of US measures — including business and travel restrictions targeting Cuba’s tourism industry and foreign investment — that reversed Obama administration policies aimed at improving relations between the two countries.

There are many other reasons the Cuban economy is in trouble. Last winter’s sugar harvest was disappointing, prices for Cuban nickel and cobalt exports have been low, and late last year Cuba lost a significant source of revenue when it pulled more than 8,000 doctors and other medical personnel from Brazil.

Cuba was reacting to criticism from Brazilian President Jair Bolsonaro, who said it is unfair that the Cuban government keeps the bulk of the salaries of the health workers it sends around the world.

“This is the worst economic situation for Cuba since the 1990s,” Carmelo Mesa-Lago, an economist and professor emeritus at the University of Pittsburgh, said recently in Miami at a conference about the Cuban economy.

But at this point economists don’t expect Cuba to sink to the depths of the Special Period. A main reason is the expansion of Cuba’s private sector, which now includes about 600,000 self-employed workers. Another is the massive growth of the tourism sector since the 1990s.

Diaz-Canel said Cuba still hopes to see some economic growth in 2019. Earlier this year, it set a growth target of 1.5%. During the summer, the government announced a strategy that includes boosting exports and food production, emphasizing import substitution and trying to make state-run businesses more efficient.

To ease some of the pain, the government also has raised public salaries and pensions for more than 2 million people, which the government said will be financed — at least in part — by budget cuts it has not specified.

The average monthly salary went up to 1,067 pesos, only about $40 a month, although Cuban salaries are supplemented by free education, subsidized medical care and subsidies for some food items.

The government also has imposed price controls that limit certain price hikes. But Richard Feinberg, an economist at the University of California, San Diego, said unless Cuba manages to reverse a decline in production of food and consumer products, prices are likely to rise anyway as more goods are funneled into the black market.

The Cuban people, however, are nothing if not resilient. They are used to doing whatever it takes to get by during hard times, whether it’s working two or three jobs or traveling to Mexico or Panama to buy air conditioners, electric scooters and other high-demand items to resell in Cuba.

Emilio Garcia, a graphic designer, said he is feeling the slowdown. He recently shut down his side business of providing arts-related walking tours because of a shortage of tourists. Still, he remains optimistic for his country. He was just a kid during the Special Period. He remembers his family cooking outside with charcoal because there was no gas for the stove.

“It’s kind of ancient history,” he said. “I don’t think we’ll ever return to that.”