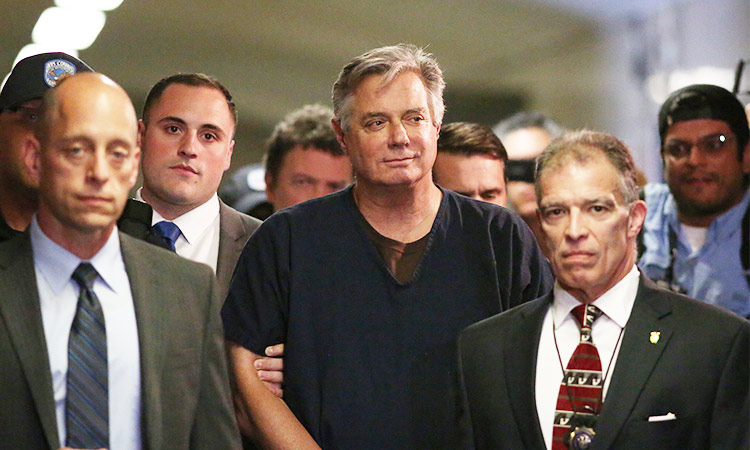 Paul Manafort is escorted to his arraignment on a variety of financial crimes in the State Supreme Court in New York. File/TNS

Why Ukraine? For the second time in as many years, a major political scandal related to US presidential election campaigns has traced its way back to this Eastern European nation of 42 million, driven by tensions between Russia and the West and weakened by systemic corruption.

The first was a fraud case against President Donald Trump’s 2016 campaign manager Paul Manafort. Now, there are allegations of influence peddling by former Vice President Joe Biden. Why they should originate in Ukraine has a simpler explanation than geopolitics: money, and the high demand for American image-smoothing services.

“In the end, there are big flows of easy money,” Kalenyuk said.

Ukraine’s ongoing conflict with Russia and the critical role the country plays in US and European relations with Moscow have given Ukraine an elevated geopolitical importance, but in the context of the latest scandals that’s irrelevant, said James Sherr, a veteran analyst of Ukraine who is now a senior fellow at the Estonian Foreign Policy Institute, a Tallinn, Ukraine-based think tank.

But if anything sets the country apart, according to Sherr, it is the pluralistic nature of corruption in a country that’s run by multiple political-industrial groups uncontrolled by the central government. That gives the groups’ leaders, the so-called oligarchs, both more cause and more freedom to hire Western advisers and front men.

Hunter Biden, the former vice president’s son, was hired in 2014 to sit on the board of Burisma Group, one of Ukraine’s biggest natural gas companies, for as much as $50,000 a month. He’s hardly unique: Former German Chancellor Gerhard Schroeder chairs the boards of a controversial Russia-to-Germany natural gas pipeline project, Nordstream 2, and of Russia’s state-controlled oil behemoth, Rosneft Oil Co PJSC.

When the UK froze some of Burisma’s assets after the 2014 Maidan revolution, the company’s founder — Yanukovych-era Energy Minister Mykola Zlochevsky — invited both the younger Biden and Poland’s former president, Aleksander Kwasniewski, to join the board to polish its badly tarnished image.

Trump and his attorney, former New York City Mayor Rudy Giuliani, have alleged that Joe Biden pressured Ukraine’s then government to fire the country’s chief prosecutor in 2016 to prevent an investigation of Burisma and Zlochevsky, as a favour to his son. Biden did push hard for the prosecutor’s removal, in line with US policy, but by then the Burisma probe was no longer being pursued. Ukrainian officials told Bloomberg News in May 2019 that they had uncovered no evidence of wrongdoing by Hunter Biden.

Trump himself is now under scrutiny for allegedly pressuring Ukraine’s recently elected president, Volodymyr Zelenskiy, to investigate the actions of the former vice president, a leading Democratic contender for next year’s election. US House Speaker Nancy Pelosi said she’s opening a formal impeachment inquiry, saying the president has violated his oath of office and obligations under the Constitution.

The case against Manafort, meanwhile, emerged from special counsel Robert Mueller’s investigation into alleged Russian meddling in the 2016 US presidential campaign. Yet the crimes for which Manafort was, in March, convicted and sentenced to a 47-month jail term were unrelated.

Manafort and Biden are just two of many Americans who have sought well-paid work in Ukraine. Last month, Bloomberg News reported that another wealthy Ukrainian, Dmitry Firtash, recently hired a pair of American lawyers: Victoria Toensing and Joseph DiGenova. The married couple have been vocal critics of Mueller’s Russia probe. Firtash, a former Manafort business partner, is fighting extradition to the US on corruption charges.

US political consultants took lucrative international work in the series of elections that followed the country’s independence from the former Soviet Union in 1991. Ukraine’s oligarchs spent millions of dollars on campaigns as they tried to get their preferred political parties and candidates into office, primarily to safeguard their existing assets and gain more from the state. Viktor Yanukovych was just one such candidate.

But no American political consultant worked as long or made as much money in Ukraine as Manafort. US prosecutors said the political gun-for-hire made more than $60 million in Ukraine between 2010 and 2014, mostly by advising Yanukovych and his Russia-leaning Party of Regions on contracts largely funded by oligarchs. In 2010, he helped Yanukovych win the presidency, after a radical makeover designed to improve his semi-criminal image in the West.

Later, Manafort hired US law firm Skadden Arps Slate Meagher & Flom LLP to write a report defending the jailing of Yanukovych’s arch political rival, Yulia Tymoshenko. He channeled a $4 million payment, financed by a Ukrainian oligarch, to the firm through his offshore accounts to avoid public exposure, according to court filings. The Skadden report was written by a team of lawyers spearheaded by the former Obama administration White House counsel, Greg Craig.

Giuliani himself has been on the payrolls of various Ukrainian oligarchs, off and on, for more than a decade. In 2008, he also advised Vitali Klitschko, a pro-Western politician and former world heavyweight boxing champion, on his campaign to be elected mayor of the Ukrainian capital, Kyiv. In 2017, he advised the mayor of Kharkiv on a contract paid for by local oligarch Pavel Fuks.

The cost to Ukraine of its unwanted involvement in domestic US politics has been immense, said Sherr, the analyst, as it tries to please both President Donald Trump and his congressional opponents in Ukraine’s most important strategic partner and protector. “Ukraine today,” he said, “is more unsettled about relations with its partners than at any time since 2014.”