Ukraine scandal threatens to put Giuliani in a spot - GulfToday 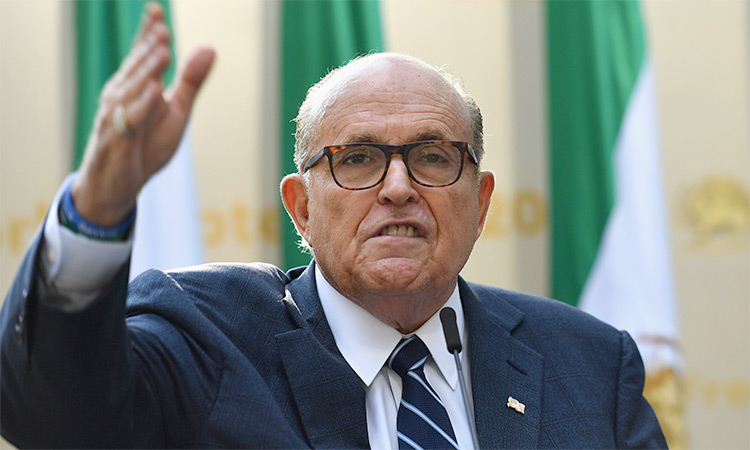 Giuliani, who has deep ties to Ukraine and many business connections there, has openly pushed for Ukrainian officials to investigate not just corruption in general, but specifically the actions of Democratic presidential candidate Joe Biden and his son, Hunter.

“Any objective, non-partisan Department of Justice would already be investigating Giuliani, who has gotten on TV and admitted things that, standing alone, raise serious concerns about violations of criminal laws,” said Mimi Rocah, a former federal prosecutor now at Pace University’s law school.

Former federal prosecutors pointed to several possible lines of criminal inquiry, based on facts that have already become public, that could entangle Giuliani:

Did he try to solicit something of value for Trump — such as information that could damage a political opponent — from a foreign party, in violation of federal election law? Did he engage in bribery by suggesting something of value — like military aid to Ukraine — in exchange for a Ukrainian investigation that could involve the Bidens? Did he step into a US foreign policy dispute as a private citizen, which could violate the Logan Act? Was he a co-conspirator in a broader effort to defraud the US by attempting to interfere in the 2020 presidential election? Even if prosecutors in Trump’s Justice Department don’t take up the matter, the congressional impeachment inquiry will likely drill down on Giuliani’s actions and communications.

The conversation between Trump and the new Ukrainian president, Volodymyr Zelenskiy, suggests a bribery or extortion scheme, said Barbara McQuade, a law professor at the University of Michigan and former federal prosecutor. She pointed out that the US president asked for a political favour immediately after Zelenskiy discussed buying more US-supplied Javelin anti-tank missile.

In effect, Trump is saying “I want you to do this favour for me before I give you what you want,” McQuade said. Many Trump allies said the summary of the president’s call with Ukrainian President Volodymyr Zelenskiy doesn’t amount to an improper trade of favours. They instead sought to direct attention to Biden’s activities in Ukraine.

Even those who are troubled by Giuliani’s behaviour noted there could be some difficulties for prosecutors. “I don’t think it’s a clear case of bribery or extortion because the government would have to convince a jury that in a long, rambling conversation where they talked at multiple points about US assistance to Ukraine and other topics, the president also asks for a favor,” said Patrick Cotter, a former prosecutor now in private practice in Chicago.

McQuade says the president’s repeated references to Giuliani, who isn’t a government official, suggests he could be co-conspirator in a scheme involving the president, who the Justice Department has said can’t be indicted while in office.

“The invocation of Giuliani, who’s not a government official and is Trump’s private attorney, strikes me as bribery or extortion and absolutely an abuse of presidential power,” she said. The actions suggest he was going outside official channels because he knew it looked shady, she added.

Rocah echoed the idea that a broader conspiracy could be pursued. She raised the possibility of a conspiracy to defraud the US, a wide-ranging statute that special counsel Robert Mueller used to bring charges against Russian nationals who allegedly interfered in the 2016 election.

If there were any merit to the underlying allegations about Biden and his son, then the US Justice Department, and not Giuliani, should be investigating, Rocah added. Like several others, she said Giuliani and Trump had something other than Ukrainian corruption on their minds. “This idea, that Trump would personally ask the president of another country to work on an investigation that’s in the interest of the US, it’s so obviously not what was happening,” she said.

Others said the use of Giuliani for an official purpose was problematic from the outset, complicated by the delay in US aid for Ukraine.

John Moscow, who was a senior prosecutor in the office of former Manhattan District Attorney Robert Morgenthau, said there’s nothing wrong with Giuliani asking Ukraine for help for his client. But he added: “When the government of the US takes the position that financial aid depends on how Ukraine responds to that personal request, that’s a conflation of Trump’s personal and government jobs, which is not proper.”

Giuliani didn’t respond to requests for comment. “No quid pro quo,” the onetime New York City mayor tweeted Wednesday, “just an agreement on both sides to fully investigate very serious allegations regarding corruption at the highest levels of both countries. Now, are we ever going to investigate Biden?”

Giuliani’s conduct could be in violation of the 1799 Logan Act, said Moscow and McQuade. The law forbids US citizens from engaging in any “unauthorized” negotiations with foreign governments. “We want the government to act and not people who are running around winging it,” McQuade said.

At the least, Congress and perhaps prosecutors will examine Giuliani’s myriad public statements and actions. They may find it hard to separate his work for the president from his many business deals in Ukraine, with extensive contacts. “It makes him a witness, at a minimum, in a criminal investigation or an impeachment inquiry,” said Cotter.

For example, Giuliani said this week that the State Department urged him to get information about Ukrainian meddling in the 2016 presidential election. Investigators will likely want to see any supporting communications on that subject.

Two Soviet-born businessman who Giuliani has publicly identified as his clients have played key roles as back channels to Ukrainian figures. They are Lev Parnas and Igor Fruman, and they have given extensively to Republican campaign coffers, while introducing Giuliani to former and current Ukrainian prosecutors.

In the congressional inquiry, Giuliani shouldn’t be able to hide behind a claim of confidentiality based on attorney-client privilege, Moscow said. “You can’t claim privilege if the president told you to take action, because that’s not advice,” Moscow said. And if the request was political in nature, it’s not protected. “Political instruction is not legal advice,” said Moscow. “It’s not privileged.”

Whether the White House will attempt to invoke some form of executive privilege over its communications with Giuliani isn’t known. Attorney General William Barr, who Trump also referred to in the Ukraine call, would need to recuse himself from any Justice Department matters related to Ukraine because he, too, could be a potential witness, several of the former prosecutors said.