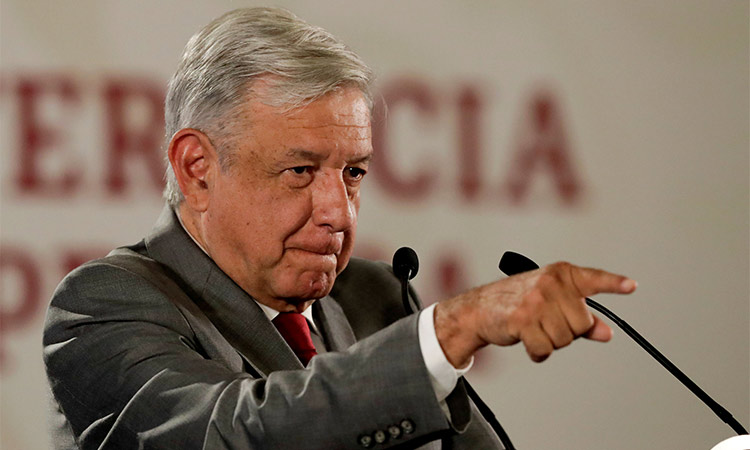 Alarmed by the rise of hate crime in the US, Mexico is calling for a summit of leaders from Spanish-speaking nations to develop a strategy to combat white supremacy. Roberto Velasco Alvarez, spokesman to Foreign Minister Marcelo Ebrard, said the Mexican government has already reached out to key ambassadors posted in Mexico and hopes to hold the summit in Mexico City by the end of the year in which leaders would draft a policy position based on discussions highlighting political and cultural values.

“If white supremacists are calling for hatred, racial divisions, what is our response? We have to define our response, defend our culture, language, civilization, our existence,” Velasco said. The summit, still in its preliminary stages, would involve leaders from Latin America, Spain and Portugal and include key Mexican American political and cultural actors, including Texas, said Velasco.

Patrick Crusius, 21, drove from his native North Texas to El Paso and on Aug. 3 walked into an El Paso Walmart wearing protective ear muffs and safety glasses and carrying a high-powered assault-style rifle. He shot and killed 22 people and injured at least two dozen more. Minutes before, authorities say, he posted a manifesto online at the 8chan website filled with anti-immigrant rhetoric that detailed his intention to stop a “Hispanic invasion of Texas.”

Eight of the fatalities were Mexican nationals, prompting the government of Mexico’s President Andres Manuel Lopez Obrador to demand that Mexico be included in the investigation. Mexico also left open the possibility of filing a lawsuit against the gun company.

“This is a big issue for Mexico and for Mexican Americans in the United States,” Velasco said. “But this is also a widespread issue for Latin America, the Caribbean countries, Spain and Portugal. The shooter wasn’t just going after Mexicans. He was targeting Latinos. Secretary Ebrard’s position is this can’t solely be a fight for Mexico, but it must be one for Latin America and beyond.”

Ebrard traveled to El Paso immediately after the shooting, demanding that Crusius be extradited to Mexico to face charges. He called the crime an “act of terrorism,” saying “Mexico is indignant. We will not meet hate with hate, we will act with reason and within the law, but with firmness.”

In the manifesto, the author warns white Americans that foreigners are replacing them. He lays out his intention to kill Hispanics to reduce their numbers in America by instilling enough fear in them to get them to leave the country en masse.

El Paso has long been a majority minority community, with more than 80% of the population Hispanic. When Crusius surrendered to police after the shooting, police say he reiterated that he was targeting Mexicans.

Some critics have blamed political leaders, particularly President Donald J. Trump, for fueling the fires of anti-immigration and anti-Hispanic racial discontent. They say the Trump administration is also using immigrants as political props.

Velasco said it would be “irresponsible for our government” to assign any blame on the White House. “What is a fact is that there are groups who promote white supremacy. We’re working with Mexican consulates to strengthen the protection of our countrymen.”

Francisco de la Torre, Mexico’s Consul General in Dallas, said his office is vigilant about any mistreatment of his countrymen in North Texas in the wake of the shooting in El Paso, but stressed his belief that the “harmonious coexistence of cultures leads to the advancement of humanity. The only thing separated by colors should be dirty clothes before they’re tossed in the wash.”

“It about time,” said Texas state Sen. Jose Rodriguez, D-El Paso, who was in Mexico City as part of the Border Legislative Academy, a bipartisan effort that includes elected US and Mexican leaders talking about common issues, including immigration and, Rodriguez added, the “attack in El Paso.”

“The moment is different in that now you have more open, wider hostility coming from the highest political levels, starting with President Trump and our own governor,” he added, pointing to Texas Gov. Greg Abbott’s fundraising letter that warned Republican supporters of the dangers posed by undocumented migrants entering the Texas border from Mexico.

“The kind of divisive language they use, the hostility against immigrants puts everyone in a vulnerable position. It’s time for Mexico to develop a more aggressive policy to build a strong relationship with Mexican nationals, and Chicanos, Mexican Americans and Latinos. Hate crimes are on the rise and we’re the target.”

Trump has repeatedly said he’s “the least racist person anywhere in the world.” Abbott has acknowledged that “mistakes were made and course correction has been made,” regarding the letter.

State Rep. Patricia Roybal Caballero, a Democrat representing District 13 in Albuquerque, N.M., was also in Mexico City for the border meeting. She said she planned to engage her Mexican counterparts on the white supremacy issue “because we all blend on the border. If you’re brown, or the other, we are perfect targets for the hate these hate groups are promulgating. That’s why it’s important for the Mexican government to take a strong stance and that we show our solidarity. On the border, we’re one people.”

For decades, Mexico and estimated 35 million Americans of Mexican descent, including Roybal and Rodriguez, have been involved in finding ways to develop alliances to promote the social and economic wellbeing of immigrants and their communities on both sides of the border. It hasn’t always been easy.

Some Mexican Americans have long been critical of the racial and economic inequality in Mexico, which they say has long led to the migration of millions of citizens. And they’ve been highly critical of government corruption and security, which has led to the deaths of more than 200,000 since the drug war began in 2006.

“I’ve been critical of every Mexican government going back decades, though for now, I’ve been heartened by Lopez Obrador’s focus to root out corruption and help the poor,” said Rodriguez, who recently announced he won’t seek reelection next year. “But on this issue of hate crimes there are more areas of commonality that require our urgent attention.”

State Rep. Rafael Anchia, a Dallas Democrat, was not able to make the meeting, as he’s traveling through South America to promote Texas investment. In an interview over the phone from Brazil he called Mexico’s efforts, “completely appropriate.”

“I understand how other countries consume the mass murder and gun violence in the United States,” said Anchia, who is also chairman of the Mexican American Legislative Caucus and chair of the International Relations and Economic Development Committee. “It’s on their TVs, 24/7, and considered to be abnormal and difficult to understand. They should be alarmed, especially when you overlay the racial elements of Latinos, Mexicanos being targeted. We as Americans do that regularly when our expats are attacked outside the United States.”

“If you’re talking about Latin America, Mexico, you must include the United States and Texas, with a 1,000-mile border with Mexico, and with the 10th-largest economy worldwide and a strong cultural affinity with Texas and Spain,” he said. “It’s impossible to have this discussion led by Mexico without Texas.”