Facing climate crisis without being a nihilist - GulfToday

Facing climate crisis without being a nihilist 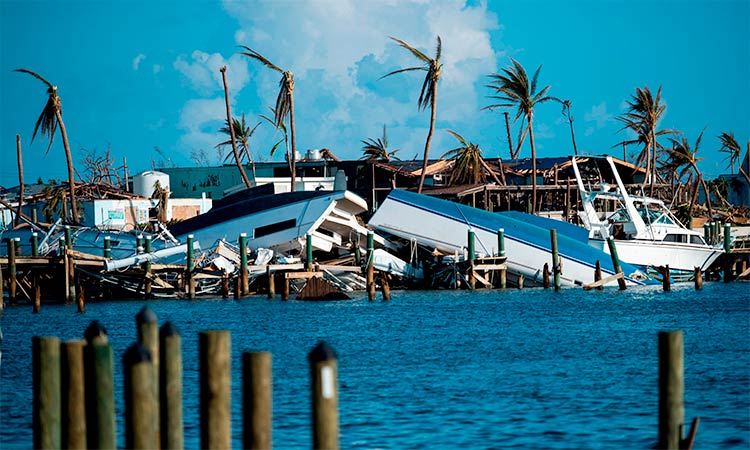 Destroyed boats are pushed up against the pier in the aftermath of Hurricane Dorian in Treasure Cay on Abaco island, Bahamas. File/AFP

The climate crisis has moved into everyday life and it can feel overwhelming. Hurricane Dorian, which left more than 70,000 people homeless, was an instance of this climate breakdown. A hotter ocean means stronger storms, a higher sea means worse flooding, a hotter atmosphere means more rain. Worsening wildfires in California and elsewhere, devastating flooding in our agricultural heartland, swaths of dead forest in the Rockies, the global collapse of coral reefs — these are just a few examples of the long and lengthening list of the catastrophic impacts of climate breakdown.

The evidence that human-caused global heating is dangerously disrupting Earth systems is unequivocal, and it no longer takes a scientist to see this. Denying this reality puts billions of lives at risk, and will surely come to be condemned by history.

Faced with this reality, it may be tempting to say, “We’re doomed,” as Jonathan Franzen recently suggested. This view comes from a deep misconception about how the crisis is likely to unfold. We will not suddenly pass a tipping point to doom at 2 degrees Celsius of global heating above preindustrial levels, as Franzen incorrectly claims. Instead, climate breakdown exists on a continuum where every 10th of a degree of additional heating means more death and suffering. No matter how bad it gets, we must keep doing everything we can to keep it from getting worse.

My own climate wake-up call came about 13 years ago when, as a physics graduate student at Columbia University, I heard a lecture by the climatologist James Hansen. His talk terrified me even through its scientific jargon, and led me to begin reading the peer-reviewed climate literature. Around the same time, my first child was born.

My love for my son made his future mine. This love expanded to include all the life on this planet, this marvelous spaceship. I felt a sense of responsibility to do something, but I didn’t know what. I felt confused and panicked. As my awareness grew, I went through stages of grief. I’ve cried over ecosystems disintegrating, over the looming possibility of social breakdown, over the scale of suffering and death this will unleash. Letting in the grief allowed me to reach acceptance and get to work. I switched careers from astrophysics to climate science — and I changed my life.

I realised that bringing my actions into alignment with my principles could reduce my panic and cognitive dissonance. Reducing my carbon emissions was something concrete I could do, and it turned out to be interesting and fun.

In 2010, I examined my carbon footprint and realized that most of my emissions came from flying and food, so I became vegetarian, found ways to cut food waste, and started flying less. I also began to bike and discovered a love for gardening and growing fruit. These and other changes turned out to be so satisfying and joyful to me that I started going out into the community to let others know.

Over three years, I reduced my emissions to about a 10th of an average American’s. It wasn’t always convenient, and if there were carbon-free planes, I’d probably fly once a year or so. But overall, I prefer my lower carbon life. It’s slower and less hectic, and more connected to the Earth and to my community. But while I like it much better, I have no illusions that it represents a solution.

Instead, it’s extremely clear to me that the most important thing any one of us can do is to raise our voices to shift the culture as much as possible. We need mass global climate mobilisation — the faster we transition to a carbon-free civilization, the better. To unlock collective action, we need people to view climate breakdown with the urgency it merits, and to view burning fossil fuels and clearing forests as socially unacceptable. We need a billion climate activists.

Burning less fossil fuel in our own lives is one way to empower our voices. I’ve found that taking this step makes my voice more authentic and allows me to speak out more freely. Actions do speak more loudly than words, and that I feel this is urgent enough to change my lifestyle isn’t lost on my audience.

While I think using less fossil fuel will benefit anyone who is concerned about climate breakdown (and this should be everyone!), I realise it isn’t easy. But there are many other ways to empower your voice. I’ve started to talk about climate breakdown every chance I get — with friends, family, colleagues, supermarket cashiers and other activists.

Anyone can do this, and it will naturally connect you with communities of climate activists, such as FridaysForFuture, Sunrise, Citizens’ Climate Lobby, 350.org and Extinction Rebellion. On Friday young people around the world held a global climate strike to demand action. Joining a community of activists adds your voice powerfully to a chorus of other voices, helps you become quickly informed, and helps you stay sane as you deal with some very challenging knowledge.

As you get more experience, use your creativity. I’ve been working to move people in academia toward flying less. We can all use our unique skills and interests to move the needle. At this point, it also makes sense to bring lawsuits against industry and government. It’s rational to practice nonviolent civil disobedience. These are all forms of speech that can make a difference.

For me, it has been a long road and I often felt like a lone voice in the wilderness. But my journey isn’t all that remarkable. What it requires is a willingness to stare this monster straight in the eye and then rise up to protect what we love about this wondrous place.

Today, despite all the grim climate news, I actually feel more optimistic than ever. People are waking up! Maybe there’s a bit of panic, but that’s a sensible response and a good place to start. I’m hopeful we’ll see broad climate mobilisation and systems transformation at a pace and scale I wouldn’t have dared dream of even a year ago. Together, we’re on our way to becoming those billion climate activists.