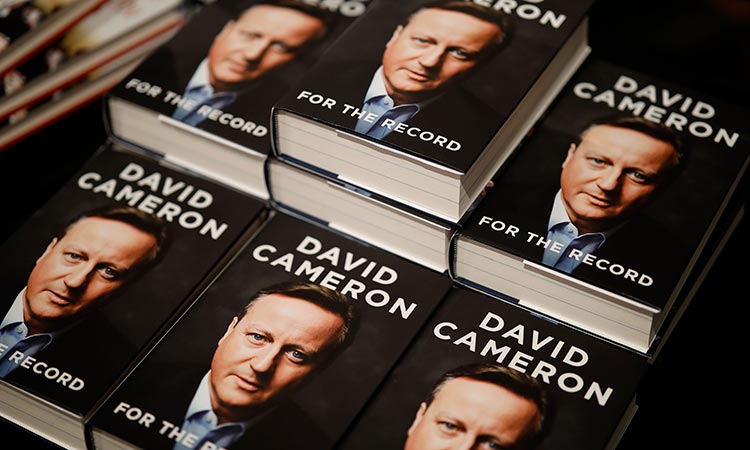 Copies of former British Prime Minister David Cameron’s memoirs are on view in a bookshop in central London on Thursday. Agence France-Presse

David Cameron’s book of memoirs opens ominously, with a foreword in which the former prime minister explains why he has barely spoken publicly about his time as prime minister: “The reason is that I wanted to let my successor get on with the job.” I thought the next sentence might be: “Now she has made a complete mess of it, I can say exactly what I think.”

That is not the only similarity between this book and Tony Blair’s memoir, also published three years after its author stood down and after his successor had left office.

Still, there are differences. Rather than Blair’s A Journey, this one is called For the Record – in other words, I Have Been Traduced: Here Is the Truth, with a possible subtitle, I Told You I’d Be Good At It (And I Was, Apart From the Part That Didn’t Work Out). Whereas Blair’s was a story of learning, discovery and change, Cameron was surer of who he was and his right to be in No 10.

Cameron writes of feeling “strangely at ease” when he became prime minister – “not at ease in an entitled, born-to-rule sense, but because there is such a warmth from all the people in that building”. It’s an unconvincing line, because the next sentence is about his “familiarity” with No 10, where he worked as a special adviser in his twenties.

But in one respect, the books are the same: they each set out to defend their author against the one charge for which history will remember him. With Blair, it’s taking the country to war in Iraq; with Cameron, it’s holding the referendum on Europe for reasons of party management and then running away when it all went wrong.

Cameron makes his case with style. The book is easy to read, with some nice self-deprecating touches. He says some of his achievements happened “because I got a bee in my bonnet about an issue and got the bit between my teeth (and like most modern politicians, mixed my metaphors along the way)”.

The narrative is kept alive by dry humour. The opening chapter is about the negotiations that followed the inconclusive election in 2010. He consulted former Tory leaders John Major, Michael Howard and Iain Duncan Smith about a coalition with the Lib Dems. He also phoned his sometime leadership rivals Liam Fox, Ken Clarke and David Davis. “Davis thinks it’s a bad idea,” he reported to his team. “Which means I’m probably on the right track.”

The part of autobiographies that I usually find most interesting is the early life, because that’s the side of the person that we know less about, and all families, even happy ones, are strange and unexpected. But Cameron’s prehistory is short: just six pages about his early childhood, four pages about Eton, and seven about Oxford. Just another 670 pages to go.

His early life is in any case well known. Most striking for me was his account of his journey through Russia on the Trans-Siberian railway in his gap year, and his formation as a conventional Thatcherite: “From that train ride onwards I was never in any doubt that in the battle between the democratic, capitalist west and the communist, state-controlled east, we were on the right side.”

Then he plunges straight into his political career, at Conservative head office and then as a special adviser to chancellor Norman Lamont. And at the outset, the ending is foretold. In 1992, he wrote a pamphlet in Lamont’s name, opposing the idea of a European superstate. It declared: “No one would die for the EU.” Cameron comments: “No 10 asked us to take it out. We kept it in.”

But the bulk of the book is devoted to the steady ascent to the triumphant 2015 election. The peak was his speech to the Tory party conference that year, after watching in disbelief as Labour elected Jeremy Corbyn its leader. “I felt that I had everything on my side: experience and energy, plus my party and my country. I find it hard to write about that now, because it makes me so sad to think about what might have been.”

Suddenly, the story ends with three short chapters, “Renegotiation”, “Referendum” and “The End”. Cameron recounts the tortured negotiations with Michael Gove and Boris Johnson, trying and failing to keep them on the Remain side. He was “repeatedly surprised” by people at all levels of the party coming out for Leave. He canvassed each member of his cabinet. “All these conversations were far harder than I had anticipated.”

He says he made mistakes and that the margin – “only” 600,000 votes – was such that “if I had done something differently the result could have been different”. I’m not sure that’s true. The only thing that might have made a difference, I think, is if Johnson had been persuaded the other way. Without him – “the only leading politician whose favourability rating was higher than mine”, Cameron notes – the Leave campaign would have lacked credibility.

As it is, Cameron is generous with his blame. He blames the government’s lawyers for “watering down” a bill, drafted in an attempt to allay Johnson’s misgivings, that would have made the British Supreme Court “the final arbiter of the application of EU law in the UK”.

He blames the Daily Mail – “it has been reported”, he writes, that he asked Lord Rothermere, the Mail’s owner, to sack Paul Dacre, its editor, and “frankly, I wish I had”. He blames the BBC, for treating the economic claims of the Leave campaign as equivalent to those of Remain. He also writes of the irony of his government’s “rescue” of the economy, which “sparked a jobs boom which attracted record migration to the UK. Our successes really do hold the seeds of our defeat.”

All of this, though, is self-aggrandising. It implies that, if only he had done things differently, or persuaded others to do things differently, he would have won. Just as Tony Blair tends to imply that Iraq was his decision alone, and to overlook the reality, which was that the Americans were going ahead with the invasion whatever the British government and parliament decided.

Right at the end of his book, Cameron’s argument switches to one of inevitability. He rejects the idea that he promised the referendum simply to hold his party together. As he says, there was “broad support” for the idea of a referendum, “which found expression in the result”. The Conservatives were divided, and Ukip was threatening to steal its voters precisely because people were hostile to EU membership. He says: “It is odd to argue that because a majority decided they didn’t want to be in the EU, this proves we should have stayed in without asking.”

He doesn’t make much of this argument, possibly because it diminishes his role: he simply tried to manage the irresistible forces that were pushing the country towards a referendum – and towards a likely decision to leave. He tried to control those forces by holding the vote on his own terms, and it could be argued that Remain did well to win as much as 48 per cent of the vote.

Cameron cites support from a surprising source – a letter John Major wrote to him in the days after he left office: “History will acknowledge that a referendum was becoming inevitable – if not now, later – and delay would have made Brexit more likely.”

I think this is the right reading of history. But as with Blair and Iraq, Cameron, ultimately, has almost no chance of persuading most people that he acted in the national interest.