There should be no fear from the UK’s general election 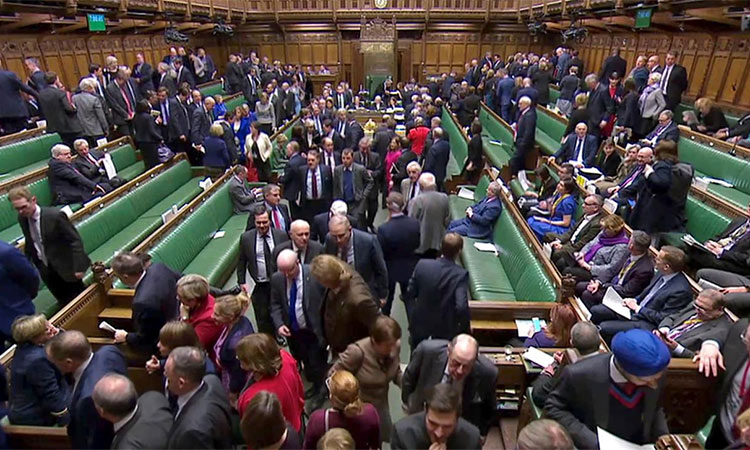 MPs leave the British parliament building after a session in London. Reuters

On Monday, a further showdown will take place in parliament with Boris Johnson bellowing at Jeremy Corbyn that he is “frit” of a general election. In truth, the House of Commons is not scared of an election but deeply worried that if they give consent in principle, they hand a very practical power back to the prime minister: the right to determine the date of the election. There is no guarantee that it would take place before 31 October.

Having lost any trust he ever enjoyed, Johnson may yet find himself imprisoned in office, with MPs insisting that he follows the law parliament, is about to agree and goes to Brussels to avert no deal by requesting an extension of Article 50.

During this period, Johnson will holler and scream that the Labour Party, and Remainers generally, are simply running scared of the public. Meanwhile, Brexiteers will attempt to scare people about the prospect of a Corbyn premiership. On both counts they are wrong. Remainers have nothing to fear from an election so long as we work together; and because we will work together, the country has nothing to fear from Corbyn.

The present polling gives Johnson an ebbing lead, but a lead nonetheless. It is likely he will strike a deal with Nigel Farage in any snap election. Perhaps Farage’s non-aggression pact in which the Brexit Party does little campaigning in swathes of the south, and the Tories do even less than usual in the north. The question for the Remain parties is how to respond.

First, Labour has to decide — clearly and unequivocally – that it is a Remain party. After three torturous years, it is nearly there. Save for a rump of outriders, Labour is now clear that it would hold another referendum, placing whatever “deal” a new administration could exact from Brussels (in all likelihood something extremely similar to that Theresa May brought back), or Remain. They cannot hedge. Even in Leave constituencies the majority of Labour voters support Remain and expect Labour to do the same.

From those decisions flow the possibility of a real Remain alliance, attracting the confidence of Liberal Democrats and Greens. The numbers do not add up for an overall majority for any of the Remain parties. While in usual times we may complain about the backroom dealing of coalitions, at times of crisis coalitions can lead to improved results with parties forced to abandon their idealism in favour of pragmatism.

Labour will have to unshackle itself from instinctive tribalism during this election, ensuring both those parties really get something back in return for any co-operation — tacit or explicit — they offer. At Best For Britain, we are creating the most sophisticated tactical voting tool in the country. Whether political parties are mean-spirited or open-minded, voters are smart: they will use tactical voting to establish how they can stop Brexit.

The likely outcome is another hung parliament: the third to appear from the four elections of the last decade. With the SNP in the ascendant again in Scotland, and the Liberal Democrats making substantial progress against the Conservatives, Labour could be the largest party but short of a majority. This would be a benign outcome for the country, since those two parties would both strengthen Labour’s pro-European backbone, and curb the worst excesses of Corbynism.

Depending on the relative strength of the parties, the prospect of a partnership government might even embolden Labour MPs to do more than clip Corbyn’s wings. They could yet evict him in favour of a more unifying figure. The Liberal Democrats’ clarity in 2010 that they could not entertain talks with Gordon Brown is a reminder of how brutal political reality can be.

Whoever is in No 10, the objective should be a joint administration whose primary purpose would be to hold a people’s vote, and to rebuild Britain’s position in Europe. It is likely that once the referendum legislation is agreed, the poll has been held and — with public consent — Article 50 revoked, a further general election would be necessary. Much as voters are fatigued, Brexit has so dominated political debate that any mandate secured in its shadow will feel inadequate once the country has moved on.

Progressives should use the opportunity of working together on Europe to agree clear on social reforms that a new government could make — reforming taxation on wealth; boosting funding to the NHS and schools; proceeding with big infrastructure projects such as HS2 and HS3; and preparing the workforce for the fourth industrial revolution. There is a genuine chance that out of the rubble of Brexit, British politics can be rebuilt and realigned. Whether the election comes this week, or in a few weeks, I say bring it on.