Climate change is having a moment in the Dem primary - GulfToday

Climate change is having a moment in the Dem primary 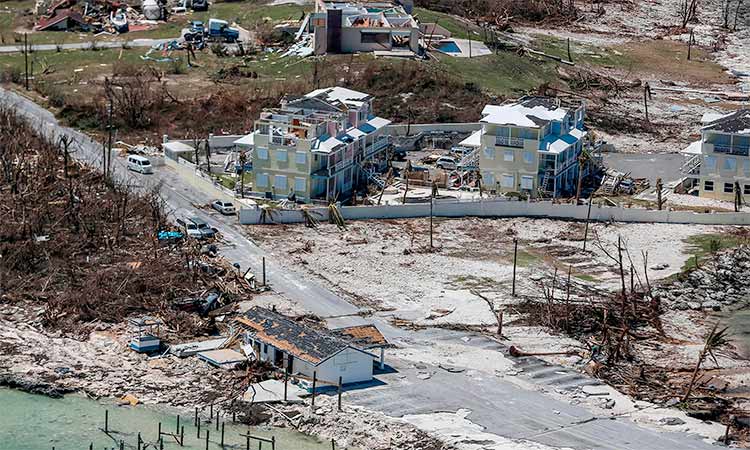 An aerial view of the floods and damage caused from Hurricane Dorian on Great Abaco Island on Thursday. Agence France-Presse

The climate of the Democratic presidential primary is changing. After paying relatively light attention to carbon emissions and rising seas, contenders for the party’s nomination are releasing a flurry of climate plans this week. They’re filling their social media feeds with urgent calls to action, warning of increased extreme weather events and mentioning carbon emissions and warming global temperatures in the same breath as deadly Hurricane Dorian.

For perhaps the first time in the 2020 campaign, climate change is having a moment. But whether it will last — and who will claim the climate mantle —remains to be seen. “We have seen, I think, an arms race now, in a good way, of candidates competing to have the most effective plans,” said Washington Gov. Jay Inslee, the undisputed climate candidate before he dropped out of the presidential race last month, on CNN Wednesday morning.

Until recently, the Democratic primary had been relatively cool on the issue. Even during the June presidential debates held in Miami, a location considered by many to be ground zero for climate change impact, the candidates spent relatively little time discussing the details of their plans.

Each promised to balance out carbon emissions to the “net zero” point no later than 2050 — a benchmark pegged by climate scientists as necessary to avoid drastic global changes — through some variation of cutting emissions and investing in alternative energy. The plans have different price tags, with Harris promising to invest $10 trillion in public and private money.

The plans, some of which borrowed directly from Inslee’s platform, are hardly the first. Candidates began releasing climate platforms months ago, but with less of a spotlight. Inslee’s exit seemed to spur new action, starting when US Sen. Bernie Sanders released a $16 trillion plan to attack climate change that he said would pay for itself over 15 years and help create millions of new jobs.

Still, party activists have been largely disappointed so far at the attention paid to climate change. Most recently, the Democratic National Committee was criticized after members voted down another request to hold a climate-specific debate.

Thomas Kennedy, a Miami activist who confronted DNC Chairman Tom Perez in Orlando, Fla., this summer at a Democratic Party function over the DNC’s resistance to a climate debate, said he’s been disappointed with most candidates on the issue of climate.

“This should be a winning issue for us,” said Kennedy, who supports Sanders. “We should want to have that debate. It’s a bipartisan issue in a lot of ways. A lot of conservative voters care about conservation and the environment.”

The candidates — and networks — are now focusing more on the issue. CNN was hosting its climate town hall Wednesday. MSNBC will follow on Sept. 19 and 20. Participating candidates will individually discuss the issue.

Meanwhile, a confluence of events around the globe — including record-breaking heat waves and melting glaciers — is bringing real-time attention to an issue that is often cast as a future crisis. There is some evidence, for instance, suggesting that the planet’s warming and changing climate is increasing the likelihood of strong storms such as Hurricane Dorian, now skirting the Atlantic Coast.

Or, as Sanders declared without apparent reservation on Twitter Tuesday, “the climate crisis is making hurricanes more extreme.”

“As fires rage in the Amazon and Hurricane Dorian pummels the Bahamas and threatens the Southeast, the gravity of the climate crisis is impossible to ignore,” said Jack Shapiro, senior climate campaigner for Greenpeace, an environmental activist nonprofit that grades candidates’ climate plans. “At this stage in the race, no candidate can afford to put climate policy on the back burner.”

Rafe Pomerance, an environmentalist who was one of the first people to raise awareness of climate change among policymakers in the 1970s, believes candidates must talk about the local impacts of climate change to connect with voters. And he thinks talking about reducing carbon emissions by 2050 feels much more abstract than talking about sea level rise in South Florida or dangerously high temperatures and wildfires in Arizona.

“There’s going to be moments along the way where the impacts emerge as a critical part of the debate,” Pomerance said in an interview late last week.

Pomerance believes the candidates seeking the party’s presidential nomination should do a better job of defining President Donald Trump, who has labeled climate change a “Chinese hoax” and claimed that wind turbines cause cancer. And he thinks there’s a specific opening to attack Trump in Florida, which has arguably more to lose to climate change than any other state in the country.

“I still do not believe that Trump has been sufficiently challenged on climate,” Pomerance said. “Trump, in effect, in Florida is saying, ‘drop dead.’ That’s the case to be made. He’s going the opposite direction on the existential question for Florida — which is sea level rise. That should be the mantra of any campaign.”

Kristina Dahl, a senior climate scientist at the Union of Concerned Scientists, thinks candidates ought to expand their talking points beyond sea rise and include issues such as rising surface temperatures and the economic consequences of inaction.

Dahl noted a study that found South Florida faces the biggest increase in the frequency of days with extreme heat of any place in the country, with downtown Miami going from zero days per year with a heat index of 105 degrees or higher in the second half of the 20th century to 53 days per year by the middle of this century without action to reduce global warming.

She said there’s an economic argument to made, because climate plans that achieve a net zero of carbon emissions by 2050 could also reduce the number of homes in Florida at risk of chronic flooding by 90% — an issue particularly compelling in the conservative-leaning Florida Keys.

“More than most states, Florida stands to benefit greatly from actions that will reduce the scope of future climate change,” Dahl said in an interview.

But there’s conflicting evidence about how much the specifics of a plan matter to voters. A “climate voter” tracking poll conducted in late August by the Sierra Club and Morning Consult showed former Vice President Joe Biden — whose climate plan received a D-minus from Greenpeace — with a nine percentage point lead among voters who say a candidate’s climate plan is “very important” in their ultimate choice for the nomination.

The results, which indicated that Biden was leading with 30% support and Elizabeth Warren and Bernie Sanders were trailing at 21% and 20%, respectively, mirrored national polls that continue to show Biden leading.