Millennials can save America from gun violence - GulfToday 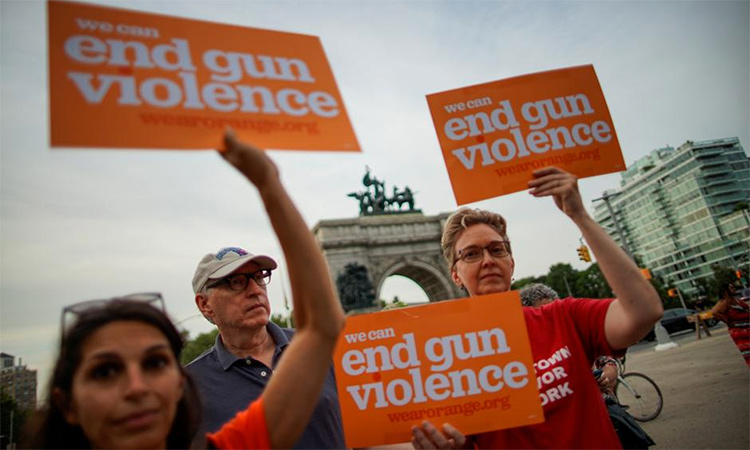 March For Our Lives was founded entirely by millennial and Gen-Z students after their school was turned into a war zone.

I’m from the first mass shooting generation. I was nine years old in 1999 when Eric Harris and Dylan Klebold killed 12 students and one teacher in the Columbine shooting. I remember the lock-down drills that followed in my elementary school; listening as my principal came over the loudspeaker reciting the name of a long-dead actor as our codeword: “Cary Grant is in the building. I repeat, Cary Grant is in the building.”

We locked the doors, huddled together and turned off the lights until the all-clear was given. These felt like fleeting moments at the time. We’d giggle under our desks, joking about having to go to the bathroom before the lock-down was over; not grasping the enormity of the situation. But, it would pass, and when the drill was over we went back to our acrostic poems, vocabulary flash cards, and basic multiplication tables. Nothing really changed after that “first” school shooting, but we kept practising the drill.

I was 14 years old when Jeffrey Weise killed his grandfather and then drove to school and killed five students, one teacher, and wounded seven others before committing suicide in the Red Lake Shootings. But that was far away in Minnesota; it wasn’t in Ohio, where I was in my freshman year of high school. So, nothing really changed, but we kept practising the drill.

Life happened, and I moved to Florida after my freshman year to finish high school. I was 16 years old when the Virginia Tech shooting happened. I was beginning to look at colleges, thinking seriously for the first time about where I wanted to go and what I wanted to study. Seung-Hu Choi killed 32 students and faculty members that day, injuring 17 more. That was in Virginia, not in Florida where we were, so again, nothing really changed. But we kept practising the drill.

Over the course of this decade, shootings became more frequent. President George W Bush and Republicans in State Legislatures across the country loosened gun laws and the 1994 Assault Weapons Ban signed by President Clinton expired, flooding the United States with weapons that had previously been contraband. Hunting enthusiasts and gun collectors sought refuge in their pernicious interpretation of the Second Amendment, and the National Rifle Association (NRA) continued to strengthen their chokehold on Republican legislators.

And then there was the shooting that should have changed everything.

I was 22 years old in 2012 when the Sandy Hook massacre took place. Twenty-year-old Adam Lanza killed his mother, 20 first-graders, four teachers, the principal and the school psychologist before turning the gun on himself. Our elected officials in Washington finally looked like they were going to do something. Like we had seen time and time again, the modest background check bill was blocked by Republicans in the Senate. However, out of tragedy came a little hope. When American politicians failed, American citizens stepped up.

Groups like Moms Demand Action and Everytown For Gun Safety found their footing and began organizing across the country. As shooting after shooting continued, more groups began to form and coalesce. Most recently, March For Our Lives was founded entirely by millennial and Gen-Z students after their school, Marjory Stoneman Douglas in Parkland, Florida was turned into a war zone. They watched 17 of their classmates murdered in cold blood, and then had to return to school and finish the academic year. Their activism commanded world-wide attention, only for their State Representatives in Florida to reject numerous gun control measures that would address the root of the problem.

Like before, nothing really changed. They just kept practising the drill.

But just because not much has changed doesn’t mean that not much will change. My peers, millennials, are the first mass shooting generation to have come of age. That’s right: all 83.1 million of us are finally eligible to vote, and we are officially the largest voting bloc in the 2020 electorate. Coming up on our heels is Gen-Z, the second mass shooting generation, and they make up 65 million young Americans.

Millennials and Gen-Z have grown up living the consequences of government inaction. When it comes to guns specifically, we’ve been forced to watch powerlessly as our schools, movie theaters, concert halls, food festivals, shopping centers, churches, nightclubs, synagogues, mosques, highways, and all other previously innocuous gathering places are transformed into war zones in the blink of an eye. It doesn’t have to be this way. There is hope.

If one thing is clear by now, it’s this: older generations aren’t going to save us from gun violence. If they were, they would have done so already. So, young people, it’s up to us, the mass shooting generations, to save ourselves. Go vote.