Only the people can stop Johnson’s monstrous politics of fear 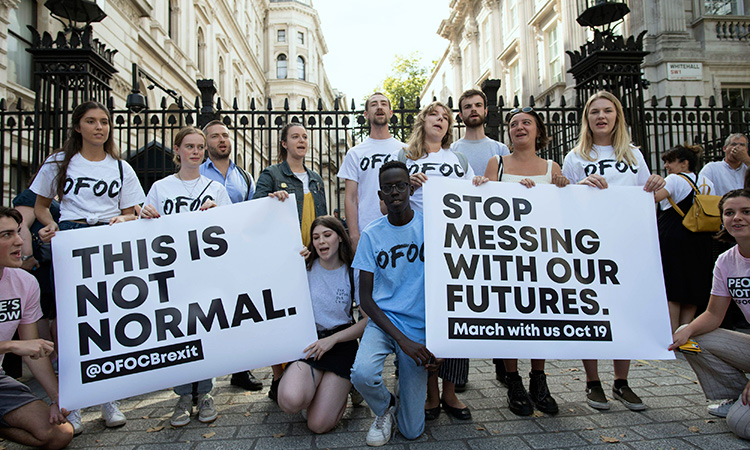 Members of Our Future, Our Choice, youth campaign for a people’s vote, protest outside Downing Street in London. File/Associated Press

We are living in dangerous times. How trite those words seem now, having being used so regularly through this never-ending political crisis. But, that doesn’t mean they lack truth, or power.

When I look at the fear and uncertainty that has replaced the friendly cohesion in my home city of Birmingham, “dangerous times” is more than a well-worn phrase. It describes the real lived experiences of families who have been settled here for generations and yet no longer feel welcome in their own home.

I call the police each time a far-right group pastes stickers about “British Identity” around my office to send me a chilling message.

I have fought against many of the things that have happened in this country under the stewardship of three disastrous Tory prime ministers, but nothing makes my blood boil more than the way their rhetoric, and actions, have allowed hate to fester and grow in once peaceful, respectful communities.

False divides are opening up everywhere. People who have been left with nothing by years of cuts feel they have nothing to lose and need someone to blame. These are the seeds from which fascism grows.

You know what? That truly is the definition of dangerous times. It has to be halted. And that halt must start with a Final Say vote on Brexit, the only way to drain the poison from our national conversation.

We have seen already what permissive leadership can unleash. He might not have said the words himself, but the calls of “Send Her Back” echoing around Donald Trump’s speeches did not surprise him, it didn’t throw him off. He didn’t halt his speech and admonish the crowd. He bathed in the warm glow of the hate he had unleashed.

Anyone who tells you that sort of thing can’t happen here, really, really needs to take a closer look at just what is going on right here, right now.

We have a prime minister who has bluffed his way into Downing Street, openly lying to the public, about practically everything, but most pertinently about the big issue of the day – Brexit. He made no attempt to use his honeymoon period to win over new support for his approach. In fact he went the other way.

And yet Johnson remains the most popular realistic choice as prime minister. He can do these monstrous things because he knows most people are fed up with politicians. No matter how good a job Laura Kuenssberg does of explaining it on the news – the technicalities of this amendment or that motion or the shock of parliament being prorogued – all it does is make this about procedure when it should be about people.

Most people are so bored with Brexit, they want us to get on with it so badly, and they don’t really even care what the “it” is anymore. But still, every time a Tory MP parrots this line about getting on with it, that is just a further lie.

No deal is not the ripping off of a plaster that it is presented as. It is not the end, only another beginning. And it is the beginning of a tortuous, painful process that will drain all of our national attention for many, many years.

Trade deals will need to be done, the handling of the Irish Border will still need to be sorted, how we get our medicines, staff for our NHS, who we buy what from when, where we can and can’t travel with ease. These questions don’t go away because Boris Johnson did a hard man routine to make Nigel Farage like him.

On that point, a recent poll showed that young people are more inclined towards a so called “strongman” leader, and less bothered about democracy. We are sleepwalking to disaster here.

It is no use saying that Boris did this and that as Mayor of London, that he’s actually a liberal, one-nation Tory really. This prime minister will wear any clothes that fit, and right now causing chaos, spreading fear, and fostering hate strengthens his hand. We are growing our own Berlusconi, and time is short to put an end to this descent into a populist benevolent dictatorship. We have to draw a line in the sand.

The last thing I’m ever going to do is point the finger and blame anyone else – this is a political crisis made by politicians. I know that. It is no coincidence that Boris’s big gamble came just the day after leaders of opposition parties from across parliament finally came together to plan a better outcome for the country.

But it is going to take more than politicians to bring the country back together. The people have to be part of this, because if they aren’t, the establishment politicians – who pose with pints and patronisingly pretend they are down with the normal folk – will simply trot out a line about “an establishment stitch up” and blame migration somehow. If they love the people so much surely we should let them have a say in how we settle this division.

The good news is, it’s not too late to fight back. The demonstrations across the UK that have sprung up since Boris Johnson announced his plan to suspend parliament have been inspiring, a spontaneous show of force from people who remember the sacrifices made to secure our democratic rights. And on 19 October, the People’s Vote campaign is organising a march on parliament that has the potential to be one of the largest political demonstrations in British history. The last one, in March, saw around a million people take to the streets. Now, the crisis facing our country is even more urgent.

I’ll be accused of hyperbole, the sexist commentators will call me shrill and hysterical as if I’m worried about a dictatorship and division because I’m on my period. The shutting of parliament to enable one man to win a game is dangerous: where does it end? One thing I’m sure of is if we let this pass without a fight, it will happen again and again, and we will end up with a strongman leader who you can guarantee won’t even get the trains to run on time.