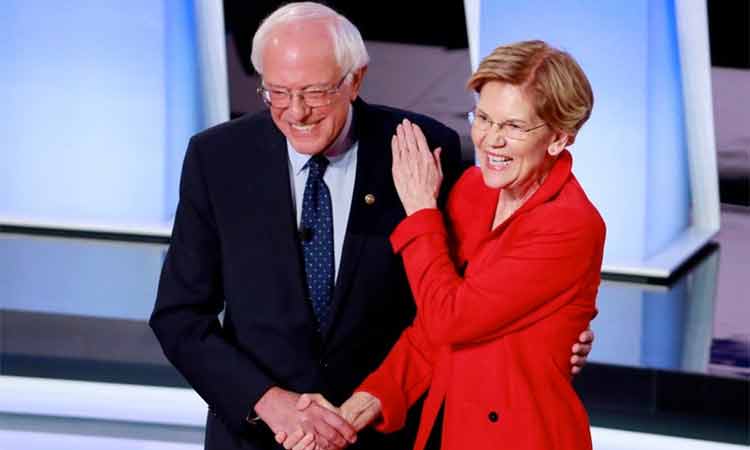 The next Democratic presidential debate will be held one night only and include all ten remaining candidates onstage, including the frontrunners Joe Biden, Elizabeth Warren and Bernie Sanders. It will also be the first time Biden and Warren take the stage together in this year’s Democratic debates.

In the past two showdowns, Warren has made clear that she is a strong debater. If Massachusetts senator decides to go after Biden, it won’t be the first time she’s confronted him publicly on his pro-big business political record – one of her top advocacy issues for decades. In 2005, Warren – then a Harvard law professor – attacked then-Senator Biden for his unwavering support of a Republican-led bill that made it harder for people to discharge debt in bankruptcy and protected large credit card companies.

The next debate will likely be another tough night for Biden, who will spend it bobbing and weaving around his problematic political record – especially his support for big business lobbyists over the interests of working Americans. On this issue, Warren will have the perfect opportunity to throw jabs his way. Sanders will also share the stage with Warren in the next Democratic debates. The two progressive senators have been reluctant to attack one another in previous debates and media appearances, and both are tied for second place after Biden in the polls.

Some pundits have even speculated whether the two senators would consider running on a joint ticket if one of them were to get the Democratic nomination, because their stances are so similar. But although this would be a dream for progressives, this would be a disastrous ticket that would practically guarantee America four more years of Trump.

For Democrats, the political conversation has shifted to the left from four years ago. But a Sanders-Warren (or Warren-Sanders) ticket would be too progressive for a large swath of swing voters who have been spooked by Republican warnings of the US turning into a welfare “socialist” state if Sanders or Warren were elected president.

Radical change is the only way to mobilize enough Americans in the upcoming elections to vote Trump out of office. So while the Democratic Party shouldn’t be worried about pandering to moderates – a tactic that got Trump elected in 2016 – there does need to be some representation of a moderate voice on the 2020 ticket. This should appease anyone worried that a shift too far to the left will leave us with another four cataclysmic years of Trump, or anyone who’d be reluctant to vote for two progressives. If Warren or Sanders secures the nomination, a more moderate running mate would be chance to compromise without repeating 2016’s error of putting forward a centrist nominee.

Sanders supporters may argue that he is the original progressive (and I agree that he is), but I don’t believe he’ll win the Democratic nomination. I’m also not convinced that enough Americans would vote for him in order to beat Trump.

The safest ticket would include Warren and someone like South Bend Indiana mayor Pete Buttigieg. As a Rhodes scholar and military veteran, has shown himself to be relatable, reasonable and genuine. Even a Warren-Kamala Harris ticket could still potentially get enough voters to the polls to beat Trump in 2020.

A Wall Street sympathiser like Joe Biden is offering the same type of campaign and presidency that Hillary Clinton did in 2016. With Biden as the Democratic nominee, Democrats will miss out on all the left-leaning voters that support Sanders and Warren.

After eight years of Trump, the damage may well be impossible to undo. Democrats don’t want to be remembered as the party who didn’t stop Trump because they were too afraid to lean left. In the 2020 general election, this makes the Democratic primary winner’s choice or running mate more crucial than ever.