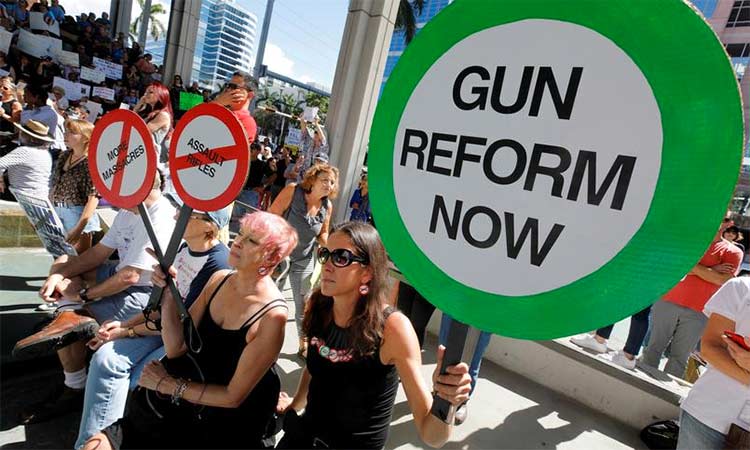 Protesters hold signs as they call for reforms at a rally in Fort Lauderdale, Florida. Reuters

When Congress reconvenes in September, President Trump has a golden opportunity to “own the libs,” as the conservative kids online say.

The Democrats, helped by the media, have spent August taunting the president and Senate Majority Leader Mitch McConnell (R-Ky.), claiming they don’t have the guts to buck the National Rifle Association and put a gun reform package on the floor. Republicans have a golden opportunity to rebut the claim and show suburban America — which, according to the latest polls and focus groups have gone south on the GOP — that they are listening when it comes to this tragic American problem.

Signalling to shooting victims, their families and the American people that heinous acts like those in Gilroy, California, and El Paso, Texas, and Dayton, Ohio, are unacceptable is the right thing to do. Americans know bad people will sometimes do bad things, no matter how hard we try to stop them, but we expect our politicians to counter such horrors with their best efforts.

Trump has an opportunity to do that, and simultaneously splash mud on liberals who politicise these tragedies.

Here’s how. The president should publicly communicate to McConnell and the Senate Republican leadership precisely what he would sign into law, giving GOP leaders the direction and certainty they need to move forward.

The package should include an upgrade to the existing National Instant Criminal Background Check System, or NICS, which is designed to stop criminals and ineligible buyers from obtaining guns. The NICS system has prevented hundreds of thousands of people from acquiring guns each year (and more than 1.3 million people since its inception), and Congress updated the system in 2018 after the Parkland, Florida, and Sutherland Springs, Texas, shootings.

But if there’s any way to further prevent criminals and mentally ill people from obtaining guns, policymakers must find a way. Polling clearly shows that Americans want something beyond what currently exists, and the president ought to give it to them. As it was with the “fix NICS” bill that passed in 2018, the goal of expanding background checks should be eliminating as many chances for mistakes as possible. Human error costs lives, as we learned in Sutherland Springs, when the Air Force missed six opportunities to put the shooter on the no-buy registry over a domestic violence conviction.

The second part of the package would be federal incentives for states to enact “red flag laws,” like the ones in California and in 16 other states, which allow police, mental health professionals, family members and other key players to file court petitions to block gun acquisitions or temporarily remove guns from people believed to pose imminent risk to themselves or others.

A recent study by UC Davis found that the California law led to the removal of firearms from about 400 people between 2016 and 2018. In one case cited by the researchers, a man had threatened to kill employees at his family’s business. After his mother petitioned the court, 26 guns were confiscated from him.

It’s hard to know how many of the 400 would have been mass shooters, but a small number of flags in the vast ocean of American gun owners is clearly not onerous. With proper due process protections, this idea is directly responsive to the president’s call to address the mental health aspect of this problem. Does anyone doubt that “red flags” existed with the shooters in Dayton and Parkland?

The third part of the package ought to be a resolution condemning all groups that use political rhetoric to justify violence, whether they are white nationalists, eco-fascists or antifa vigilantes. By endorsing this, Trump can lead a simple, yet powerful, across-the-board condemnation of violence and violent rhetoric coming from all extremes of the political spectrum.

With the president’s promise to sign it, McConnell could put the reforms on the Senate floor for an up-or-down vote. Some Republicans wouldn’t follow the president, but I’d bet that enough would join with Senate Democrats to get 60 votes, the magic number. Hesitant GOPers who fear a slippery slope on gun control should ask themselves if they want this issue legislated with Republicans in control of two of three legs of the policy stool or zero, a political possibility always just around the corner.

And think of the pleasure for the president in forcing Senate Minority Leader Charles E. Schumer (D-N.Y.) to make a tough choice — deliver Democratic votes for the package, thus handing Trump a win that would be cheered the country over, or urge a vote against it on grounds it doesn’t go far enough, making his conference members appear to be craven grandstanders instead of problem solvers.

Trump wins either way, whether Schumer puts up or shuts up. If the president wanted to engage in some next-level jiujitsu, he could throw in a ban on high-capacity magazine and drums like the one used by the shooter in Dayton. This is a step further than some conservatives want to go (and a step back from the nebulous assault weapons ban preferred by liberals) but would be a meaningful step in attempting to reduce the carnage that occurs in mass shootings. The president should compare the drums to bump stocks, which he banned already.

If Trump signs a gun reform package, he’ll have a second feather in his I-did-what-Obama-couldn’t-do cap, alongside criminal justice reform. And he’ll have a great conversation starter for the suburban women who abandoned the GOP in 2018’s midterm.

But most importantly, the president can reassure Americans that our government refuses to sit idle in the face of horrific carnage, which has shattered families and our national psyche. Good policy makes good politics, and Trump has a clear way to win on both fronts.