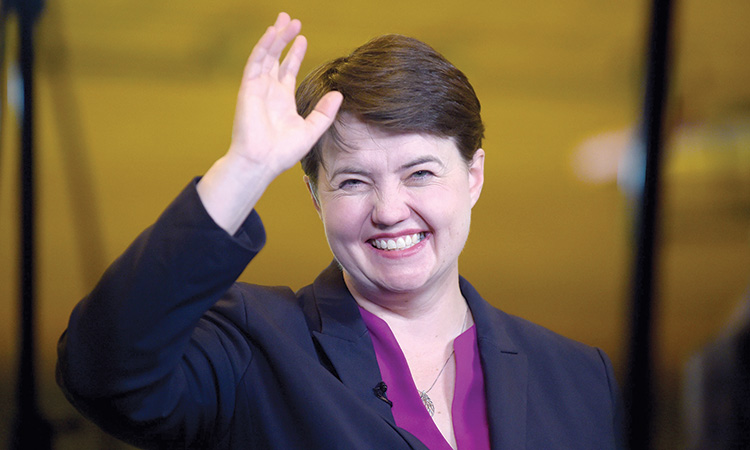 Ruth Davidson’s resignation as leader of the Scottish Conservatives is very bad news for Boris Johnson. She sugared the pill a little in her valedictory statement in Edinburgh by saying she believed Johnson’s assurances to her that he genuinely wants a Brexit deal.

She stressed movingly that she was also standing down for personal reasons to put her 10-month-old son before her party, but she acknowledged her “conflict” over Brexit. Davidson is one of those branded a Remainer by Brexiteers but it’s a very misleading label: she accepted the 2016 referendum result and favoured a soft Brexit to protect Scottish industry. Her well-advertised opposition to no deal does not mean she is against Brexit.

Worryingly, there seems to be no place in the Johnson regime for people like her. She felt marginalised by the incoming PM, notably when he sacked her ally and friend David Mundell as Scottish secretary despite her pleas for him to stay. Message: true believers only need apply for ministerial jobs.

Boris should be very concerned about Davidson’s departure. It is highly symbolic of how the Tories are becoming the Brexit Party in order to eat Nigel Farage’s fan club before it eats them. Failing to keep Davidson on board at a time of national crisis blows a hole in Boris’s claim to lead a One Nation, liberal conservative government. Again, Brexit eclipses everything.

The irony is that Davidson and Johnson have much else in common. They are both “Heineken politicians” who appeal to parts of the electorate the Tories struggle to reach. They possess the rare quality of being fun. They both have liberal instincts on immigration while being traditionally Tory on law and order and defence. If the cards had fallen differently, Davidson could easily have become a contender to become prime minister; many Tories regretted she was not an MP and so could not run for the leadership this year. We now know her family commitments would have prevented it, after her typically honest but worrying statement about today’s 24/7 politics.

The divide between Boris and Davidson on Brexit was not bridgeable while no deal remains such a real possibility and, in the eyes of Johnson’s allies, is now synonymous with Brexit even though no one talked about it in 2016. Davidson’s powerful plea for MPs to get behind a deal was also a message to Johnson to pull out all the stops to secure one, and to compromise in his negotiations with the EU.

Boris will miss Davidson because his own Heineken effect has been diluted by the EU referendum – and most certainly does not reach Scotland. With an autumn general election looking more likely by the day, Johnson may come to rue the departure of the leader who boosted the number of Scottish Tory MPs from one to 13 at the 2017 election, allowing Theresa May to remain in power (just).

It is true that an early election would have been problematic for Scottish Tories even with Davidson at the helm, but no one would have a better chance of cushioning the blow than her.

Scotland voted to Remain by 62 per cent to 38 per cent in 2016. No wonder, then, that the prospect of no deal has fuelled support for another independence referendum and for a breakaway. For now at least, Boris seems more concerned with pandering to the Tory members who elected him. Their obsession with Brexit even trumps their name as the Conservative and Unionist Party. A highly significant YouGov poll found that 63 per cent of Tory members would rather Brexit take place, even if it meant Scotland leaving the UK.

Ultimately, it was May’s genuine commitment to the union that persuaded her to abandon her “no deal is better than a bad deal” mantra. The political landscape is very different now.