Johnson is suspending parliament to show who is in control - GulfToday 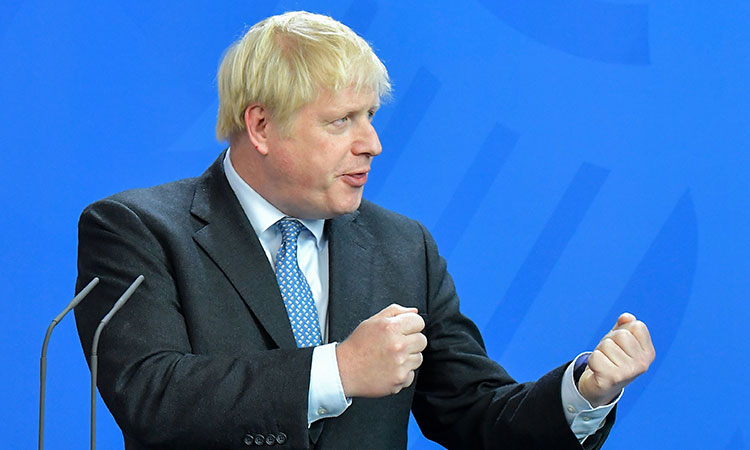 He has done what he had said he would not do. Parliament is to be prorogued, suspended, for five weeks so that the House of Commons is powerless to prevent him taking the UK out of the EU without any kind of deal in place.

When the announcement had been made, he allowed a Sky News camera into No 10 to explain exactly why.

“We need to bring violent crime down, invest in our fantastic NHS,” he waffled, pushing the words out through his lips as though they were a Play-Doh fun factory accidentally filled with actual bulls**t. “We have exciting proposals to move this country forward.”

He was suspending parliament, he explained, so that he could have a new Queen’s Speech, to set out his new government’s “new legislative agenda”. At one point, he was so excited by his new domestic agenda that he couldn’t remember what it was. “More police officers,” he paused for five full seconds. “Investing in infrastructure.”

We should be grateful, in a way. It was a smirk that acknowledged the prime minister isn’t actually serious about insulting our intelligence in this way. Nor even his own. The laugh that confirms the lie.

He knows and we know that virtually no legislation passed through the House of Commons in more than a year. It cannot pass. There is a minority government. His “exciting new agenda” will be dead on arrival. If he wants to get any of it done, it will require a general election – a general election that will render irrelevant the Queen’s Speech he was standing there, openly laughing as he announced.

If nothing else, it can at least be added to the index. The range of political artefacts that will at some point be brought forth to try and explain the mutant politics of our time. Johnson is suspending parliament to show it who is boss. To tell MPs that there will be no holds barred in the battle to get Brexit over the line.

It begins the process through which he will start to frame a general election that he knows is coming. The “people vs parliament” election. And, as of now, in the summer of 2019, the way to get the people onside, against parliament, is to call in the TV cameras, adopt a knowing grin, and openly lie to them.

By mid afternoon, the Queen had approved the decision, taken at a privy council meeting at Balmoral, with the government represented by Jacob Rees-Mogg. It means she will have to come to Westminster in just under two months from now, knowing she is a pawn in a parliamentary power game.

So what? It has been thus since 1688. Well, not quite. That is the date from which the monarch has been, as a matter of constitutional law, subordinate to parliament. But the monarch has never before been deployed, by a prime minister, to subvert parliament. This is a precedent that could yet summon protesters to surround her carriage as it makes its way across town. Unimaginable scenes.

Who are the victors here? Johnson’s personal Brexit brain egg Dominic Cummings will certainly imagine himself one. The Remainers are clueless. They’ve been outmaneuvered. Thus far their response has been to demand meetings of their own with the Queen (Corbyn and Jo Swinson).

The Labour MPs Dawn Butler and Clive Lewis have pledged to “occupy parliament”. It is hard to know even where to begin with an idea this dim. Butler and Lewis are, together, two of the precisely 650 human beings who are allowed on to the floor of the House of Commons. They will “occupy” it in the same way you or I occupy our sofa at night.

Not since a handful of MPs who backed Andrea Leadsom’s leadership bid by organising a “march on parliament” three years ago, then got to parliament, buzzed themselves in with their own security passes and quietly went up to their offices have any MPs come up with anything quite so toweringly stupid.

The health secretary, Matt Hancock, certainly isn’t winning. Three months ago, he stood on a stage, in front of the television cameras, and declared that proroguing parliament would go against “everything that the men and women (of D-Day) waded on to those beaches and fought and died for”.

Now that the prime minister had insulted the war dead in this way, Mr Hancock had no choice but to resign. He did it in the most dignified way he could. No announcement. No statement. He just quietly left the government. So quietly, in fact, it has been suggested that it still hasn’t actually happened, but that can’t possibly be true.

I suppose the screenwriters of The Crown have had a good day, for when they finally get round to penning the landmark Brexit series, there will be Her Majesty, perched on a tartan chesterfield, fending off nervous enquiries from private secretaries about what her third born did or did not know about the untimely death of his convicted paedophile friend when in waltzes Jacob Rees-Mogg, opera coat flapping in the highland breeze, to let her know that, with regret, there’s going to have to be a civil war and could she just sign here.

Is it a constitutional outrage? John Bercow seems to think so. He even prorogued his summer holidays for a full three minutes to say so. He tapped the words, “this is a constitutional outrage” in to the Notes app of his iPhone at 11 o’clock this morning, then screenshotted his outrage, WhatsApped the pictures to a few journalists, and headed back to the sun lounger.

Still, Johnson’s smirk reveals the truth. Unless parliament manages to pass a no confidence motion in him, he has every right to carry on as he sees fit. His gamble is that they cannot pass one and that he can therefore do what he likes.

It is, however, somewhat short termist. It is an open declaration of parliamentary war, and it is one that he might very well win. But it reduces the conflict to an all out death match with an end date of 31 October.

The UK, in all likelihood, will indeed leave the European Union on that date. But it will argue about it for years, if not decades to come. There is likely to be a recession. There may yet be medicine shortages that directly cause deaths. Gordon Brown has warned as much.

And yet Johnson and Cummings’s decision, taken in front of the TV cameras with an insuppressible smirk, to strip the decision of the legitimacy parliament might have conferred upon it, may yet prove monumentally naive, not even in the long term, but in scarcely 11 weeks from now.

That will make one thing a matter of certainty. There will be even bigger, even more undisguisable lies to come.