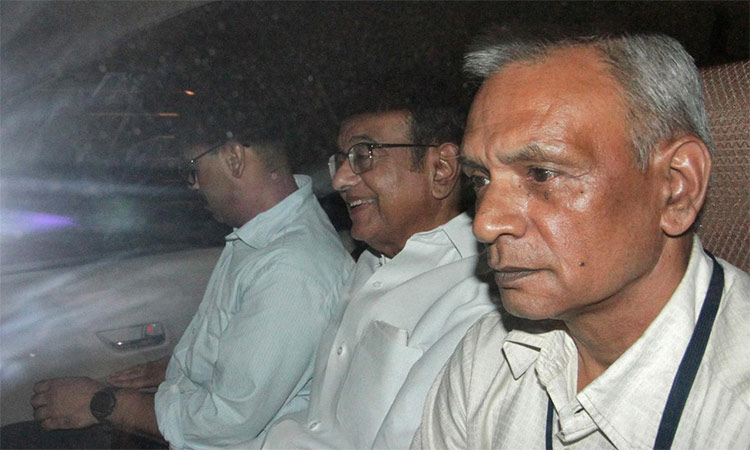 Palaniappan Chidambaram (C) sits in a vehicle after he was arrested by the CBI officials in his residence in New Delhi, India. Reuters

Bollywood stunt artistes would end up with fractured bones if they tried to imitate CBIs field staff scaling the high walls of former Home Minister, P. Chidambaram’s Jor Bagh bungalow with orders to arrest him. The swoop, in full glare of the media, would have unnerved the “D” company, or El Chapos but they would have dug tunnels in the loo, predictable means of escape. A sophisticated mind like Chidambaram’s, cool and calculating, contrived cunning passages to the Congress office for a press conference that evening.

It was not a simple arrest. That would have required barely two constables. It was mounted as a TV extravaganza for the entire nation — and beyond — so that they would be in awe of the power of the state. It requires mastery of the electronic media for perfect choreography on such a scale. Consider the contrast of Sonia Gandhi making a weak tepid intervention. “Rajiv Gandhi also won with two-thirds majority” but he did not indulge in “actions like this” or words to that effect.

Chidambaram’s arrest has come as a shock to the party which has only one of its wings operating coherently — its legal team, particularly the Kapil Sibal-Abhishek Manu Singhvi duet. Let the party now prepare itself for more tantalizing television.

Open rebellion in Madhya Pradesh is on the cards, where Jyotiraditya Scindia may change sides as a conscientious objector along with a number of MLAs. Should that happen, Rajasthan cannot be far behind. Bhupinder Singh Hooda’s rebellion in Haryana will unnerve the Gandhi family that much more because Robert Vadra owes a few to him.

My crystal ball tells me that the BJP’s relentless hunt for states is designed to accumulate a sufficient number of states to make a bid towards major constitutional changes. The BJP likes milestones. Who knows in 2022, the 75th anniversary of Independence, the nation may wake up to a Presidential form of government. The climax, of course, will be reached in 2025, Centenary of the RSS, by which time the Ram Mandir may have been built, as the crowning glory, preparatory to the declaration of Hindu Rashtra. At this point my reverie is broken by a whisper: “Your fantasy has not taken into account the plummeting economy, the common people, the diversity of India.”

Well, it is these democratic roadblocks that the power of electronic media helps remove. The 2019 election results are a classical example. Economy, on which so much breast beating is taking place today, was as bad prior to the elections. In the interest of electoral victory, the cameras were not allowed to pry into that story. A requirement of the present regime is not just a control of the media but its “comprehensive” control.

When the Babri Masjid was demolished in December 1992, the event was covered only by Doordarshan and a VHS weekly magazine called Newstrack. New economic policies proceeded to spawn a culture of consumerism which clamoured for more advertisement space. Followed the mushroom growth of TV channels. Competition for TRP ratings conditioned programmes — four “Cs”, Cinema, Cricket, Crime and Communalism, emerged as the favourites. Communalism it was that the politician latched onto, and with rich dividends.

Meanwhile, accelerated globalization was reinforcing trends in India. For instance, the post 9/11 Islamophobia amplified by the global media, coincided almost exactly with the explosion of communalism in India. When Narendra Modi arrived in Ahmedabad in October 2001 to replace Keshubhai Patel as Chief Minister, he was not even a member of the assembly. That is when the world’s (and India’s) attention was riveted on the occupation of Afghanistan. Islamophobia was in the air globally, reinforcing saffron in India. Modi was in luck.

Televised fireworks on an unprecedented scale in Afghanistan, targeting Osama bin Laden, must have gone some distance in muffling the world’s reaction at the horrors of Godhra and the 2002 Gujarat pogrom. An already unbridled western media broke loose in Afghanistan. I shall never forget Geraldo Rivera of Fox News flourishing a revolver in front of the camera: “I shall shoot Osama dead if I see him.” This was the new tone of the “free media” at its best command performance. Can you see traces of this intemperance in the copycat Indian media?

The Chidambaram drama draws inspiration from another genre of western media. Colour revolutions, the Syrian uprising, numerous examples, most recently, the continuing protests in Hong Long. Let us consider Hong Kong, for example.

Violent protests led to the withdrawal of the Bill, but the protests, begun in March, would not end. It was generally speculated that western agencies were stoking them. A photograph appeared in local newspapers of the leader of the protests, Joshua Wong, discussing strategy with Julie Eadeh of the US Consulate in a Hong Kong hotel. This tended to confirm foreign interference. But quite brazenly, the protest continued.

The point is this: supposing scores of western journalists had not descended on the territory with their multiple camera units, would the protests have continued? Conversely, the yellow vest protest movement has lasted for nearly a year in France and elsewhere in Europe without the spur of a saturation coverage. What explains its longevity? It is a genuine movement — one that western establishments are not interested in playing up, unlike the one in Hong Kong.

Against this perspective, the highly televised drama of walls being scaled by cops betrays a purpose much larger than the simple arrest of Chidambaram. 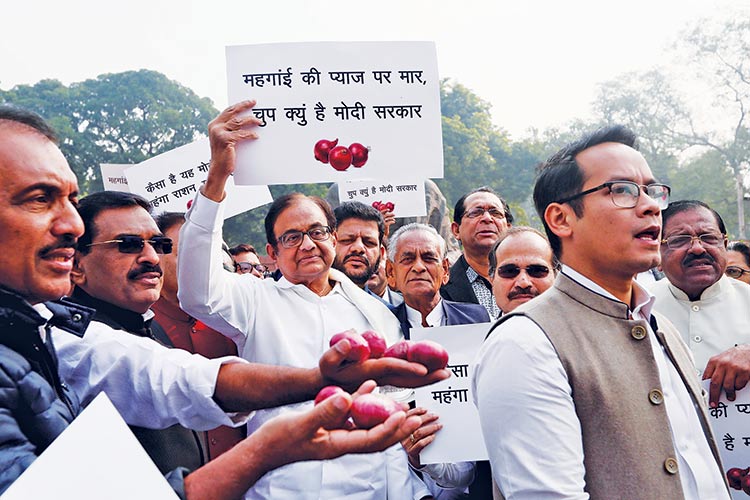 Veteran Congress leader P Chidambaram, who was released on bail on Wednesday by the Supreme Court, made a vigorous return to Parliament on Thursday with a stinging attack on Finance Minister Nirmala Sitharaman.