Michelle Obama is the perfect rival for Trump, but... - GulfToday 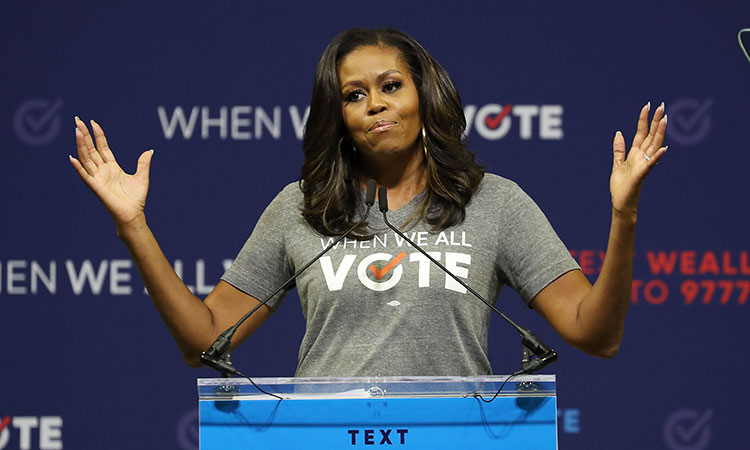 Former first lady Michelle Obama speaks during a rally at the University of Miami in Coral Gables, Florida. File/AFP

With many surveys showing multiple Democratic hopefuls leading President Donald Trump in hypothetical 2020 ballot tests, Democrats should feel confident they can deny the incumbent president a second term. But many don’t.

In spite of the huge field, the Democratic race is muddled because of questions about Joe Biden’s campaign skills, the progressive agendas of Sens. Bernie Sanders and Elizabeth Warren and the difficulty in finding a nominee who can appeal to a variety of constituencies, from the party’s base to suburban swing voters to possibly even working-class white women.

A series of hiccups by Biden on the campaign trail, including in the initial debates, ought to bother party pragmatists, who correctly see the former vice president as the Democrat with the broadest appeal. If Biden continues to stumble and his candidacy ultimately implodes, pragmatists will need to find a new standard-bearer. At the moment, there is no obvious alternative.

Warren has potentially broader general election appeal than Sanders — at least she has never embraced socialism. But she certainly isn’t a pragmatist, given her attitudes toward business and her support for “Medicare for All,” the Green New Deal and canceling student debt. While Warren has moved up in the polls, Sanders’ candidacy, which looks weaker now than it did four years ago, limits her ability to unite populist progressives.

California Sen. Kamala Harris would seem to be an obvious alternative should Biden implode, but her performance in the second debate and her shifting position(s) on Medicare/health care raise questions about her candidacy. So far, she seems unwilling to position herself as a pragmatic progressive, even though that would likely benefit her.

South Bend, Ind., Mayor Pete Buttigieg has had his moments in the early going, but he remains stuck in the mid-single digits in national polls and his youth and questionable appeal to minority voters limit his prospects.

The rest of the Democratic field has an even longer road to travel. Colorado Sen. Michael Bennet has done well in debates but lacks charisma. Former Texas Rep. Beto O’Rourke has not answered questions about his substance and heft. And Minnesota Sen. Amy Klobuchar, who as much as anyone has explicitly positioned herself as a pragmatic progressive, has so far made little headway, let alone caught fire.

All of this leads to an obvious question: As late as it is in the election cycle, is there still time for someone with proven broad appeal to enter the race?

If you are a Democratic strategist responsible for winning back the White House in 2020, you would want someone smart, thoughtful and knowledgeable. You would prefer someone with Washington, D.C., experience, but not someone who is seen as “too Washington.” You would look for someone personable, charismatic and relatable. And of course, the ideal candidate wouldn’t have a lot of political baggage, thereby keeping the focus on Trump.

Finally, thinking about the primaries and the general election electorate, you’d want someone who can energise the Democratic base and appeal to suburban swing voters, particularly white women (and men) with a college degree. If he or she could also win some white, working-class voters, particularly women, that would be icing on the cake.

Add up those qualities, and one name jumps out: Michelle Obama. No, the former first lady is not running for president, and she has disavowed any interest in doing so. But she would have plenty of assets if she did run, and she might have a better chance of defeating Trump than anyone currently in the contest.

A Princeton graduate with a degree from Harvard Law School, Obama is a dynamic speaker. Empathetic and passionate, she appears sincere, authentic and dignified. It’s no wonder that she connects with so many people. Can’t you imagine her on the same stage as Trump?

The former first lady has never sought or held elective office, but that might even be an asset. Certainly, Trump proved it isn’t a requirement.

She’d benefit from her husband’s current standing. A year and a half ago, Gallup asked adults how they viewed Barack Obama’s job performance during his time in the White House. In hindsight, the survey found 63% approved.

A recent Aug. 11-13 Fox News poll found 95% of registered Democrats with a favorable view of Barack Obama. Among all voters, his favourable rating was 60%.

Of course, the former president has some baggage, and it would be transferred to his wife. His critics would become hers, and Trump would surely run against a “third Obama term.” But given Barack Obama’s electoral performance and current polling, the 44th president of the United States would be a clear asset for his wife.

Clinton Redux?: Some Democrats believe that Hillary Clinton’s loss shows that a woman can’t win. But Clinton had tons of baggage that Michelle Obama doesn’t have, and Obama could change voters’ perceptions about electability with an effective campaign and strong showing in the polls.

From an electoral point of view, the former first lady reaches exactly the audiences that Democrats need. She could turn out her husband’s voters, and she should have strong appeal in the swing suburbs and among younger and minority voters.

If the Democrats are fortunate, they’ll find that the president is so weak next year that almost any nominee with a “D” behind his or her name will win. Indeed, that’s the case right now, with Biden, Warren, Harris and Sanders all leading Trump in recent national surveys.

But, it’s difficult to count on that some fifteen months before the election.

Democrats have a large and interesting field. And yet, only Biden — or at least the Biden of 2008 — looks to have broad enough appeal to give Democrats a clear advantage in 2020. If he implodes, the party would need to look elsewhere for a standard-bearer. That person may now be stuck in the lower tier of the Democratic contest, or may have already ruled out a bid.

Admittedly, the idea that Michelle Obama would change her mind and seek the Democratic presidential nomination is ridiculous, especially late in the contest. It’s absurd. It can’t happen. In fact, it’s about ridiculous and absurd as Donald Trump running for president and winning. 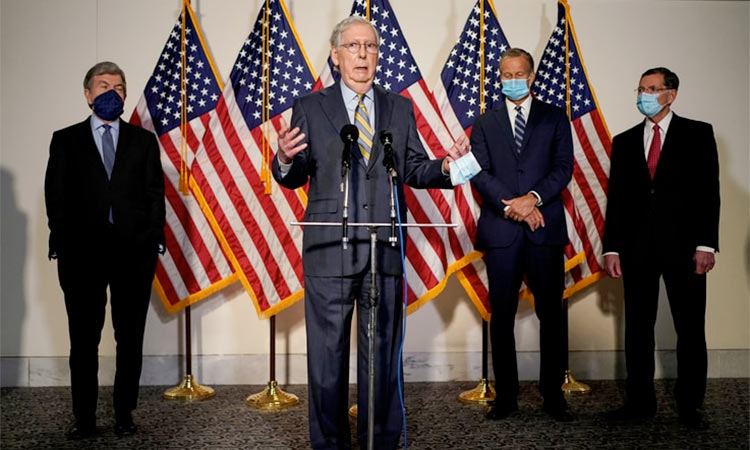 Politics in America is not that bad after all

It was a dreadful year, obviously, and that applies to US politics, too. Nevertheless, believe it or not, some stuff was worth celebrating. Here are five good developments: Republicans for democracy: In a year when the Republican Party overall showed