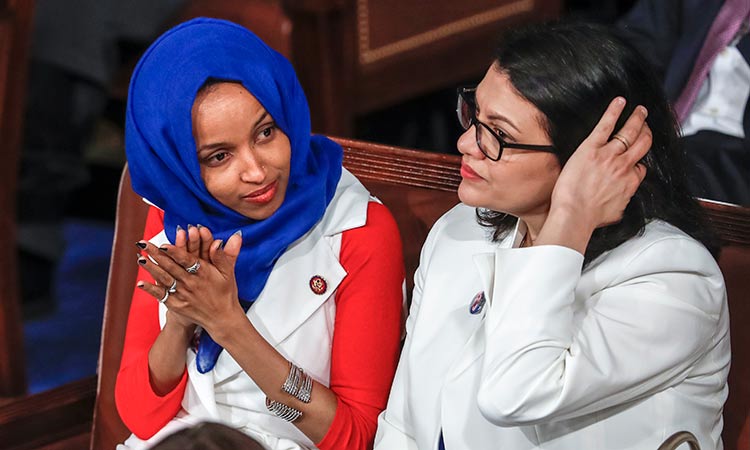 Ilhan Omar and Rashida Tlaib listen to Donald Trump’s State of the Union speech at the Capitol in Washington. File/AP

Israel’s ban on the entry to Palestine of two US Muslim Congresswomen should wake the world to the urgent need for independent entry and exit channels for both visitors to and Palestinians dwelling in the Israeli occupied West Bank and besieged and blockaded Gaza.

Rashida Tlaib and Ilhan Omar were due to visit East Jerusalem, Bethlehem, Ramallah, Hebron and Tlaib’s family village in the West Bank. At the last minute, they were denied entry by the Israeli authorities under a 2017 law which bars anyone who supports the Boycott, Divestment and Sanction (BDS) movement. BDS is designed to put pressure on Israel to end the occupation, cease colonisation, and halt Palestinian human rights abuses.

Of this figure Democrats account for 56 per cent although Congress routinely condemns BDS and strives to outlaw the effort, which is expanding on the international plane.

The treatment received by Tlaib and Omar contrasted sharply with the warm welcome given to 41 fellow Democratic party Congress members invited to visit by the American Israel Public Affairs Committee (AIPAC), the powerful pro-Israel US lobby organisation.

While in Israel “proper,” the Democrats and 31 Republican members were addressed by Israeli Prime Minister Binyamin Netanyahu and visited religious and historic sites and military installations. They did not go to Palestinian cities, towns and villages to assess the impact of the occupation on Palestinian lives.

In July, Israel decided to allow Tlaib and Omar to visit Palestine via Israel. However, Donald Trump urged his dear friend Israeli Prime Minister Binyamin Netanyahu to ban them.  Trump’s aim was not to save Israel embarrassment but to use the ban in next year’s presidential and Congressional campaigns by falsely claiming the Democratic party is racist against Israelis and Jews as well as anti-Israel.

Issued at the last moment, the ban was condemned by the Democratic party, liberals, US Jewish organisations, including AIPAC, and Israeli human rights bodies.  It is argued that such action will damage Israel’s global reputation and undermine its claim to be the “only democracy” in this region. Political analysts contend the ban will deepen the rift between Democratic party critics of Israel and whole-hearted supporters from both parties, undermining Congressional bipartisanship — which in the “age of Trump” does not exist, in any case.

In a partial reversal, Democratic party Muslim lawmaker Rashida Tlaib was granted conditional entry through Israel to the occupied West Bank village of Beit Ur al-Fauqa to visit her grandmother. Israeli Interior Minister Aryeh Deri made this concession in response to a letter by Tlaib.  She initially promised to refrain from political activity during the visit which, she argued, could be the last time she sees her “sitti” who is 90 years old. She then changed her mind and said she could not accept restrictions on her freedom of speech.

Despite Tlaib’s unfortunate flip-flop, Deri’s concession will not undo the public relations damage the ban has inflicted on Israel’s image as a country that abides by international humanitarian norms. The scandal has made Tlaib and Omar heroes.

The case of Tlaib and Omar highlights the need for independent entry and exit facilities for the five million Palestinians who live in Palestinian enclaves in the West Bank, East Jerusalem, and, to a lesser extent, Gaza.

They are prisoners, denied freedom of movement within the West Bank, between East Jerusalem and the West Bank, between Gaza and these areas as well as the right to exit and enter Palestine’s disconnected territories. Israel prevents direct contacts with visitors, supporters, friends and relatives. The daughter of Palestinian immigrants to the US, Tlaib — along with Omar — has campaigned for Palestinian human, civil, political rights and self-determination.

Since Tlaib and Omar are Muslims they have also been denied their right to pray in Muslim holy places, including al-Aqsa mosque in Jerusalem. They have been treated in the same way as Palestinian Muslims and Christians in the West Bank and Gaza who are deprived of their religious rights.

Although Gaza has a transit point to and from Egyptian Sinai, Palestinians seeking to enter and leave are screened by the Palestinian Authority and Israel.  Some are denied exit permits, even to perform the Hajj, to attend universities, or seek medical care. Visitors are limited to UN officials and people who have permits to enter Gaza. Gazans enjoyed relative freedom of entry and exit when hundreds of tunnels operated between the Palestinian and Egyptian sectors of the divided town of Rafah straddling the Gaza-Egypt border.

Freedom of entry and exit did not even exist when Palestinians had their own airport in southern Gaza, which opened in November 1991 and was closed by Israeli bombs in October 2000 at the outset of the Second Intifada. Passengers using the airport were bussed to Rafah where they passed through Palestinian immigration and Israeli security. Gulf Today’s correspondent flew to Gaza twice, the first time from Amman, the second from Larnaca in Cyprus — believe it or not.

Palestinians and visitors to the West Bank-East Jerusalem wing of Palestine could gain freedom of entry and exit if the Palestinian Authority is permitted to operate an exclusive Palestinian channel at the King Hussein (ex-Allenby) bridge between Jordan and the occupied West Bank.

Gaza would be more complicated at present due to Hamas’ rule and the fact that Egyptian Sinai, where Cairo is waging war on Daesh, borders the coastal strip.  However, if and when the insurgency is quashed, the authorities in Gaza and Cairo should be able to work out a plan for Palestinian control over who comes and goes without Israeli screening.

Israel has refused to consider Palestinian options, arguing its need for security. Israel uses the “security” pretext to imprison Palestinians and control entry to Palestine to outsiders. Israel has always been a “control freak” and this mind-set has intensified during the reign of Netanyahu and his right-wing coalition partners.