The Green New Deal is less about climate, more about control - GulfToday 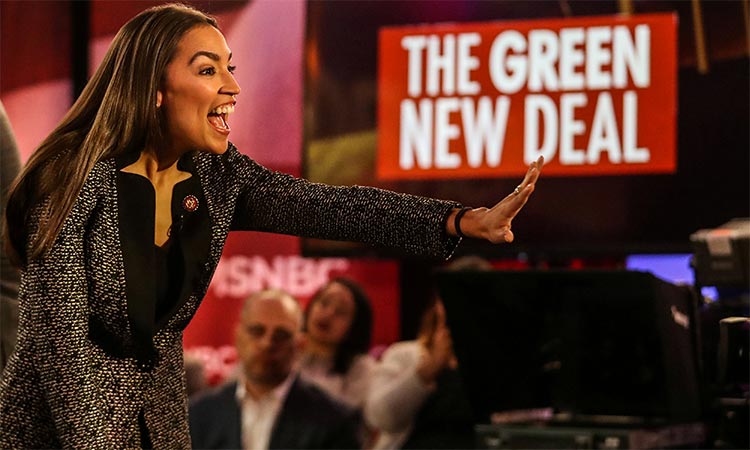 If someone asked you to describe the Green New Deal, what would you say? According to Sen. Bernie Sanders, it’s a “bold idea” that would “create millions of good-paying jobs” and help “rebuild communities in rural America that have been devastated.”

Oh, you thought the Green New Deal was all about fighting climate change? Well, think again. Turns out it’s a green-glossed Trojan horse designed to increase government control over the economy.

Just ask Saikat Chakrabarti, chief of staff to Rep. Alexandria Ocasio-Cortez, the author of the deal. “The interesting thing about the Green New Deal is it wasn’t originally a climate thing at all,” Chakrabarti said. “We really think of it as a how-do-you-change-the-entire-economy thing.”

Just how much change would the Green New Deal bring to the economy? Put simply, it would bring it to its knees. We know, because when we tried to use the Energy Information Administration’s National Energy Model to assess how the plan would affect the economy, the model crashed.

The Green New Deal is big on vision, but sparse on details. For example, it calls for reducing greenhouse gas emissions to 60% below 2010 levels by 2030, with the ultimate goal of reaching net-zero emissions by 2050. But it doesn’t say how to get there.

One thing is clear: to meet these goals, Washington would have to force all Americans to reduce their energy consumption and/or switch to “green” energy sources — and fast. And the only way to do that is to impose coercive taxes and regulations.

To assess the economic effects of such a scheme, we started by looking at a carbon tax — the most popular recommendation of those asking government to “nudge” us off of fossil fuels. Using the Energy Information Administration’s model, we tested to see how high a carbon tax would have to go to meet the Green New Deal’s emission targets. We ratcheted the tax up to $300 per ton, which dropped emissions 58% below 2010 levels — but not until 2050.

That left us far short of reaching the deal’s targets, but when we tried to push the tax higher, the model crashed. Clearly, the Green New Deal’s emission targets are unrealistic. Yet the danger they pose to the economy are far too real.

Before the model’s lights went out, we found that a $300 per ton carbon tax and associated regulations would cost a family of four nearly $8,000 per year in income lost to higher energy costs, consumer prices and foregone wages. The 20-year cost totals $165,000.

During that same 20-year period, the tax would siphon off an average of 1.1 million jobs per year and diminish GDP by a total of more than $15 trillion. That’s a hefty price to pay for getting barely halfway to the net-zero emissions goal. Is it worth it? After all, proponents of eliminating conventional fuels argue that the cost of climate change dwarfs the cost of climate policy. However, it terms of “climate insurance,” eliminating greenhouse gas emissions doesn’t get you very far.

To see if this is true, we turned to another tool: the Model for the Assessment of Greenhouse Gas Induced Climate Change (MAGICC). Developed at the National Center for Atmospheric Research, this model assesses how much increases and decreases in greenhouse gas trajectories will affect global temperatures and sea levels.

Running this model, we found that overhauling America’s economy — as envisioned in the Green New Deal — would abate global warming by approximately 0.2 degree Celsius by the year 2100. The reduction in sea-level rise would be less than 2 centimeters.

Chakrabarti is spot on. The Green New Deal isn’t a “climate thing” at all. And it would certainly change the economy — for the worse.