Supporters eye a Sanders and Warren alliance on the horizon - GulfToday 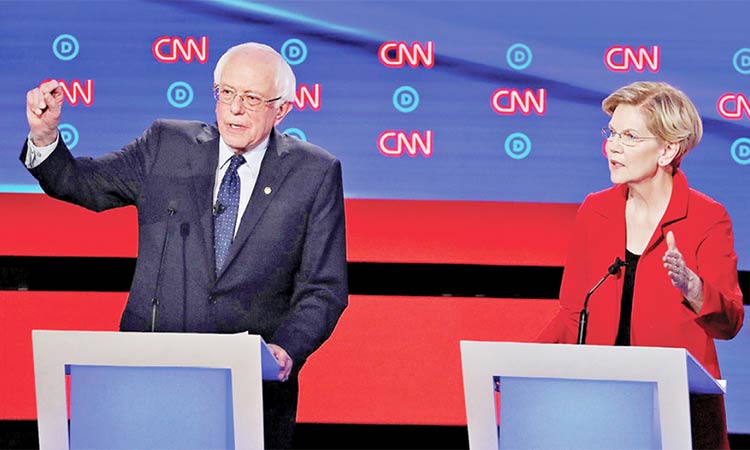 Bernie Sanders and Elizabeth Warren are Senate colleagues, ideological partners and mutual admirers. But their tacit alliance in the 2020 Democratic presidential primary is approaching a breaking point as they vie to become the progressive alternative to front-runner Joe Biden.

More than five months out from the Iowa caucuses, liberals are thrilled that two of their own are at the top of the field. But there’s an underlying worry among some of their supporters that if both Sanders’ and Warren’s strength endures, they could clear the path for the more moderate Biden to win the nomination — a scenario similar to how Republicans never united behind a single alternative to Donald Trump in the 2016 primary.

“We could see ourselves in a very similar position this year with the not-Joe Biden vote similarly diluted and he could win victories with 20 or 25% because all of the vote is spread out,” said Tim Smith, a New Hampshire state lawmaker supporting Sanders, but reserving Warren as his second choice. “They have an enormous amount of overlap in terms of the voters they’re appealing to.”

While the Sanders and Warren campaigns are sensitive to any hint of a burgeoning rivalry, their supporters know their detente can’t last much longer. They acknowledge that eventually the two candidates will be forced to contrast their records, policy proposals and plans to defeat Trump.

“I think there’s going to be a reckoning,” said Ed Butler, a New Hampshire state legislator who endorsed Warren in June and has never been drawn to Sanders. “I think that his positions are valuable, but to me Bernie’s always been somebody who says the same thing over and over and over about the 1%, but I haven’t heard the back-up. Whereas with Elizabeth, you hear the back-up and the policy and the plan repeatedly, and it’s upfront and debatable.”

The low-boiling rivalry is expected to come to a head in New Hampshire, the second contest on the nominating calendar. Given both Warren’s and Sanders’ geographic proximity to the state, a loss there would be difficult for either of them to recover from. A recent Boston Globe/Suffolk University poll showed Biden leading in New Hampshire with 21%, followed by Sanders with 17% and Warren with 14%.

Yet in Iowa, two of the last three polls have shown Warren surpassing Sanders. A new Monmouth University survey in the state showed Warren in second place to Biden, and Sanders falling to fourth place behind Kamala Harris.

In that Monmouth poll, Warren boasted the highest net favorability of any candidate. She also posted an 18-point lead over Sanders among very liberal caucusgoers.

Tim Bottaro, a Sioux City, Iowa, attorney who is supporting Pete Buttigieg as a result of his daughter’s employment with that campaign, said Warren has the best organized operation in the state and thinks she’s stealing Sanders’ thunder on a number of issues.

“Bernie just seems to have lost something this time around,” Bottaro said. “The newness. The message. Something.”

Part of the Warren campaign’s muscular presence in Iowa is designed to strike an early blow there that would undercut Sanders’ structural advantage in New Hampshire, where he routed Hillary Clinton in 2016 and has maintained a strong operation.

But given Sanders’ financial prowess — he had a field-leading $27 million in the bank entering July — there may be little incentive for him to exit the race even if his standing in polls falls.

Warren, on the other hand, has shown the steadiest growth of support of any candidate, vaulting into second place in delegate-rich California, according to a recent SurveyUSA poll. As more voters see and hear Warren on the trail, they’re climbing on board.

“You’re seeing growth in her numbers and not so much in anyone else’s,” said Dan Kalik, a senior political adviser to MoveOn.org. In most polls, Sanders and Warren’s combined support surpasses Biden’s. But that doesn’t mean their coalitions are identical.

Warren fares better with upper-income, college-educated liberals, whereas Sanders’ voters tend to have lower levels of education and income. Some of Warren’s most loyal supporters are over the age of 50; Sanders’ strongest age group remains the 18-34 contingent.

Russ Feingold, the former progressive senator from Wisconsin, said he doesn’t think the two candidates’ coalitions are necessarily transferable, but that they eventually may reach a point where one might be coaxed into putting the cause before their own campaign.

“If one of them started doing well and one not so well, it’d probably be a good idea if one of them dropped out,” said Feingold, who has not endorsed a 2020 candidate.

And then there’s the most apparent difference between Sanders and Warren: gender. That factor is weighing on Rachel Cisto, a New Hampshire voter who is still deciding between Warren, Sanders and Cory Booker. She said she has recently leaned toward the Massachusetts senator partly because she’s tired of old white male candidates, but also because she relishes the contrast Warren would bring to Trump on a debate stage.

For now, Cisto liked how Sanders and Warren presented a united front during the July debate, but understands that can’t last forever. “They’re going to have to distinguish themselves at some point,” Cisto said. “I’m interested to see how that will be done.”

As the field inevitably narrows, those who know both Warren and Sanders doubt they’ll shrink from articulating their differences on issues such as eliminating student debt, how to attain universal health care and foreign policy.

But both candidates are sensitive about devolving into a personality-driven fight. “I would be shocked to see them go negative on each other,” said Josh Nelson, co-director of the liberal group Credo Action. “Anything perceived as going negative on the other could backfire.”

Rep. Raul Grijalva of Arizona, who raised eyebrows by switching his support from Sanders in 2016 to Warren in 2020, said the biggest factor in his endorsement was Trump.

But before that, he’s under no illusion that voters will eventually be presented with a split-screen between Warren and Sanders.

“Eventually there’s a stress point. There will be. When one of them becomes more ascendant than the other in terms of being the principal rival to Biden, it gets a little more tense,” he said. “We’re not there yet, but we will be.”