Had enough? Here’s how to fight the mass shootings madness - GulfToday 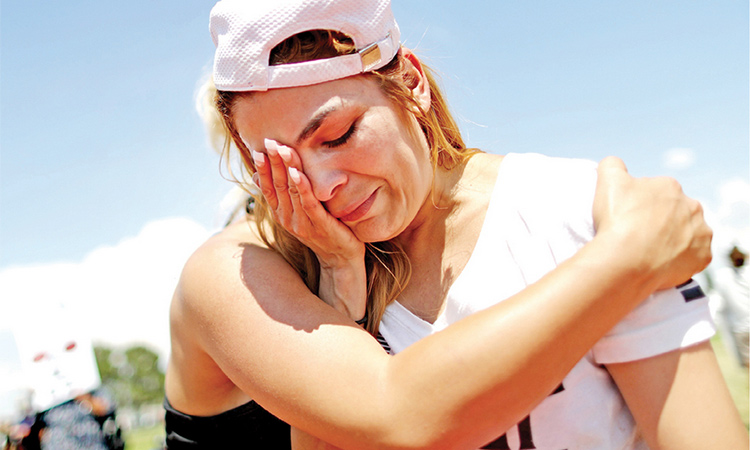 Gilroy. El Paso. Dayton. It’s one senseless and horrific mass shooting after another, and you’re hit with waves of sadness, anger and frustration.

If 20 children were massacred at a Connecticut elementary school in 2012 and the sensible gun control proposals that followed were handily defeated, is there any way ordinary citizens can ever overcome the combined forces of the gun lobby and the large chunk of Congress it owns?

I put the question to Loren Lieb, whose son was shot and wounded 20 years ago this month at the Jewish Community Center in Granada Hills. On Aug. 10, 1999, Loren Lieb was at work and so was her husband, Alan Stepakoff, when they learned of the shooting at the Jewish Community Center. Their sons, Seth, 8, and Josh, 6, were both there when a white supremacist on a mission to kill Jews arrived. Seth was OK, but Josh was shot in the leg and the hip and was rushed to the hospital.

He and four other victims survived their injuries, but the same shooter later shot and killed a Filipino American mail carrier in Chatsworth. Josh recovered physically but struggled with post-traumatic stress disorder, and the sound of helicopters and sirens were triggers for a while, Lieb said.

He wanted to go into psychology and counsel trauma victims, but he decided instead not to be immersed in that field, Lieb said. He’s now 26, got married a week ago and is on his honeymoon. “I wish he was blissfully unaware of what’s going on now, but I know he’s not,” Lieb said. “For a very long time, when anyone said something about the JCC shooting, you knew what they were talking about because that had been the most prominent attack on a Jewish institution.” No more.

Lieb has been volunteering for years with the San Fernando Valley chapter of Brady United Against Gun Violence, as well as with the West L.A.-based Women Against Gun Violence. “I get so angry at people who say there’s nothing we can do about this,” Lieb said. “We can’t accept that. We’ve tackled difficult problems throughout our nation’s history, and this is a difficult problem that ultimately has to be tackled at the ballot box.”

The focus is on educating the public about gun safety and the daily toll from gun suicide and homicide, not just mass shootings, and Lieb said volunteers can do any number of things to help. “Really, the first big thing is to educate yourself. When my kid got shot 20 years ago, I had no idea what the gun laws were or what you had to do to get a gun. I didn’t know the various aspects of the gun and ammo industry and how they’re regulated,” Lieb said. “We educate the public, we also educate physicians, faith groups, school groups — anybody who wants to have us as speakers. And we work on legislation.”

If you don’t have the time for those things, Lieb said, you can support the cause by donating to the nonprofits working on the issue. If you have limited time, “You can write letters ... but just wringing your hands and saying, ‹Oh, my God, this is absolutely terrible,’ does absolutely nothing to solve the problem.”

For years, the National Rifle Association has been an immovable force, and the gun lobby will keep putting its considerable money and muscle into the fight against gun control. You obviously can’t, as a Californian, vote a congressional representative from another state out of office.

But that doesn’t mean you can’t lobby for gun control legislation at your state or local level, Lieb said. “We have the strongest gun laws in the country,” she said. “In the ‹90s, when gun deaths peaked, we started implementing gun laws and the death rate dropped much faster than in the rest of the country, and now it’s substantially below average.”

Margot Bennett, the executive director of Women Against Gun Violence, said she has been fighting for gun control since the mass shooting in 1984 at a San Ysidro McDonald’s. “About three years ago, a very dear friend of mine committed suicide with a gun,” Bennett said. “I set about to take action, and the Los Angeles City Council ... passed a suicide prevention ordinance that requires all gun stores and sellers to post suicide prevention information. Not everything has to be a big action. You can make a difference.”

The disturbing reality, Bennett acknowledged, is that “it’s very easy to get discouraged” as a gun control activist in this country. Lieb said people like to blame mental health and violent movies, TV shows and video games for our gun violence, but we have the most civilian-owned guns of any country and the laxest regulations.

“We have to accept the reality that what distinguishes us from other countries is guns,” she said. Lieb laid out a brief list of gun control priorities that get no traction, no matter how many innocent people are slaughtered. “We should ban military weapons, we should ban high-capacity magazines and we should have background checks,” she said.

But she noted that President Trump’s nominee to head the Bureau of Alcohol, Tobacco, Firearms and Explosives has said he doesn’t support any additional gun control measures — even though we live in a country with more guns than people.

Haters and mass shooters have been around a long time, but we’re living in a particularly toxic and terrifying moment. The darkest corners of social media offer both inspiration and audience to the angry, aggrieved and delusional, and we have a president whose most vile instinct is to turn people against each other for his own political gain.

But to Bennett, those are reasons to jump into the fray rather than give up on change. “Not all of Congress is terrible. A part of Congress is terrible,” she said. “The Democratic House has produced significant gun violence prevention legislation ... and it is sitting in the Republican Senate, and Mitch McConnell refuses to bring it up for debate and a vote.”

Bennett said it’s time to lay the groundwork to oust those lawmakers. Polls suggest most people of both major parties support sensible gun control, so call elected officials and tell them you won’t settle for anything less.

“Learn the facts. Know who’s doing what and vote accordingly, vote single issue, vote locally, state and nationally,” Bennett said. There’s been a long string of mayhem since the JCC shooting in 1999. Synagogues and churches and other religious institutions have been attacked since then, along with schools, shopping centers, movie theaters, and on and on and on. There have been more than 250 this year alone.

So many, it’s hard to keep track of them all.