America has shown the world ‘who we are’ - GulfToday 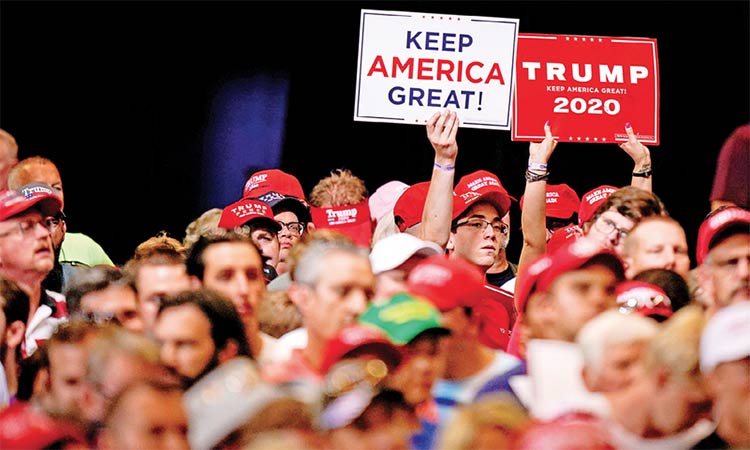 Supporters of Donald Trump hold signs during a campaign rally for the president in Cincinnati on August 1. File/Reuters

“This is not who we are!” It’s a cry that reverberates around America with every Trump malfeasance, with his every flash of the white power symbol. It’s the plaintive chorus of decent Americans: heartfelt, genuine and utterly deluded. America has always shown the world exactly “who we are”. The only ones who haven’t noticed are Americans themselves.

Americans share a national ideology — the belief in their exceptionalism. It’s perhaps the only thing that unites the nation — the belief that America is the greatest country on earth, and that Americans are truly blessed, superior to all other beings. When vice president Mike Pence stood at a lectern addressing a room full of white people about America encamping on the Moon in five years’ time and said, “America doesn’t do second place”, he expressed a belief shared by most Americans: “We’re the best, and we know it.” Challenge this at your peril, for there is no greater impudence than to suggest America is anything but.

Americans believe God has bestowed upon them a unique set of freedoms denied the rest of humanity, and that their “free country” is the envy of the world. A global study by Freedom House — an independent watchdog that publishes an annual report on freedom around the world measured in terms of civil liberties — finds that Norway and Finland top the list, sharing first place. So while the Land of the Free may not “do second place”, it does “58th place” where civil liberties are concerned, according to findings. Under the Trump administration, America is experiencing an “accelerating decline in political rights and civil liberties”, but Americans like Pence never let the truth stand in the way of propaganda, and if you repeat something often enough, people will believe it.

The truth is, America has a long, shameful history of corruption, cover-ups and crimes against its own — namely people of colour— which many white Americans conveniently overlook. Arguably, the best way to measure the greatness of a country is by how it treats its people, and America has always been a failure in that respect. It has always been an imperious oppressor of the only Americans who can rightfully stake a claim on American soil, like the Oglala Sioux, for example, who even today are relegated to life below the poverty line on reservations whose housing often lacks basic amenities, and where teen suicide is 150 per cent higher than America as a whole.

The government’s policy of forced sterilisation of Native American women during the 1960s and 70s made considerable progress towards the genocide of indigenous peoples. Exact figures aren’t known — especially as America is adept at rewriting history — but it’s believed that by 1976 as many as 50 per cent of Native Americans were sterilised without their knowledge. They’d go into hospital for routine surgery and would come out with a missing womb, or a tubal ligation.

White Americans rarely share collective pride in the nation’s heritage; they never celebrate or honour their indigenous roots in any real way. They do, however, often ridicule indigenous peoples, like the cocksure Covington school teen in a MAGA hat who squared up to a Native American elder by the steps of the Lincoln Memorial during an anti-abortion rally. The fact that Nathan Phillips was beating a tribal drum should have immediately inspired respect; instead, it induced a Catholic-school lad to act like a pompous prig. When, in 2002, the Central Park Five were released from prison after serving sentences of up to 14 years for a crime they never committed, Americans suddenly had to face the full extent of corruption in the NYPD. It was a racially charged case that changed New York irrevocably — not least because video footage of the boys confessing to the brutal gang rape of a white woman aired on every network, fuelling the narrative that black men are inherently prone to criminality. Many column inches were dedicated to the alleged scourge of black boys “wilding” in our cities. One voice in particular lobbed the molotovs that stoked that narrative: Donald J Trump.

The casino owner paid for full-page ads in New York’s major newspapers calling for the boys to be put to death. His incendiary rhetoric stoked much of the backlash against the boys’ families — and the death threats. When DNA evidence exonerated the five and the full picture was revealed — forced confessions, threats and a staggering stitch-up orchestrated by the Manhattan District Attorney, perpetuated by bent cops, meted out in a miscarriage of justice disturbing not only for its pure racism but for its scale — Trump doubled down and poured scorn on due process.

The framework in which such a travesty was even possible is rooted in decades of pervasive corruption, requiring the complicity of legislators at the highest levels. That one case alone encapsulates “who America is” — a country whose system of justice is so corrupt there is always someone more corrupt at a higher level to ensure the corruption of the corrupt continues unimpeded. All his life, Trump has made the most of such a system. He is rotten to the core, but he certainly didn’t create corrupt America; rather, corrupt America created him.

When reports started to surface of widespread ballot tampering in many Jesus states during November’s mid-term elections, and mysteriously faulty voting machines causing long lines at polling locations in African-American districts, the pockets of rage that erupted around the country were not nearly as loud as the deafening silence among white Americans who’ve come to accept voter suppression as the American way. Racism is stitched into the very fabric of American society — it’s a tenet of fundamentalist America, which Trump courts to his very great advantage — as evidenced in the recent El Paso and Dayton mass shootings.

From school segregation, which is still practiced despite being unconstitutional, to redlining, a discriminatory practice that impedes people of colour from home ownership by denying them access to bank loans, to statistics which show that black Americans pay more for car insurance than their white counterparts, these insidious policies are the result of a concerted effort to ensure opportunity is denied to people of colour.

Racism and corruption exist everywhere, but the difference between America and other civilised nations suffering acts of racism is that American legislators enact policies that disproportionately hinder anyone right-of-centre on the colour chart; great nations such as New Zealand do not.