Marianne Williamson won the debate and we’re probably all doomed 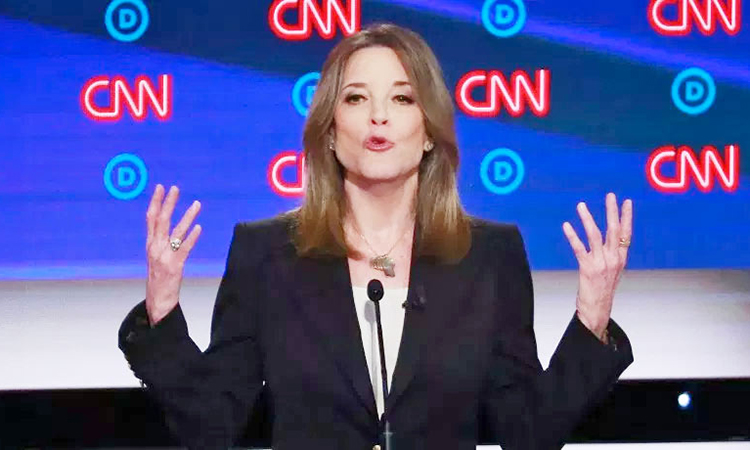 Marianne Williamson speaks during the Democratic US presidential debate in Detroit, Michigan. Reuters

A month ago, after the first round of Democratic primary debates, I pleaded with the DNC to declutter the stage and laser in on the real contenders. After Tuesday night’s opening bout for the second round of debates, I’m ready to admit I may have been wrong, and bringing more voices to the event is valuable to viewers and voters.

It was refreshing to see a handful of anonymous low-pollers challenge the convictions of progressive powerhouses Elizabeth Warren and Bernie Sanders. Stirring the pot, generally speaking, is good. But there is one clear exception: celebrity whisperer Marianne Williamson (who, I feel obligated to mention as early as possible, has a history of anti-science, anti-vaccination rhetoric that, alone, should be immediately disqualifying).

Tuesday night, nerds like me across the internet logged onto Twitter in the wake of the debate in search of a dialogue between journalists, pundits and scholars on what policies America needs, wants and can actually politically obtain — and whether any of those overlap.

But we’re living in a post-2016 world, so of course that was nowhere to be found.

Google trends show Williamson (who, I again feel obligated to note, believes AIDS and cancer are the “physical manifestation of a psychic scream”) appeared in the most searches after the debate in all but one of the 50 states (that’d be Montana, whose people Googled their own governor, Steve Bullock, as he made his first appearance on a presidential debate stage).

Williamson also owned Twitter. Her proclamations of love and metaphysical justice sparked many a meme.

Look, like most 22-year-olds, the line between genuine appreciation and ironic enjoyment blurred in my head long ago. And I hate to crash the tarot card-reading party. But this has to stop. Now. Because we’ve seen this before. Give Williamson enough shine as a “joke” candidate, and soon enough voters will start to buy in.

No, Williamson’s core beliefs aren’t a fraction as malignant as Donald Trump’s. And no, she isn’t a one-to-one mirror image. But she politics the same way, and that makes her dangerous.

Like Trump, she’s uncovered a disaffected corner of the party. The kind that doesn’t vote; the kind that’s inspired more by an appeal to ill-defined existential emotions than effective policymaking. Like Trump, she projects a coming American apocalypse, tapping into liberal nightmares rather than conservative ones. Like Trump, she then presents herself and her own spiritual gut instinct as the sole (and soulful) path to salvation.

“If you think any of this wonkiness is going to deal with this dark psychic force of the collectivized hatred that this president is bringing up in this country, then I’m afraid that the Democrats are going to see some very dark days.”

Bemoaning “wonkiness” — i.e., intellect and proven political savvy — while speaking in vague buzzwords like “dark psychic force” and “collectivized hatred” is not too far off from the Trump 2016 playbook. And matching the GOP’s anti-intellectualism movement is far from what the Democratic Party, and America, need in 2020.

She also called out her peers as part of the corruption problem, thus inherently offering her outside celebrity status as proof she is beholden to no one. Sound familiar? This tweet is practically written in Trump’s voice: “There’s some corruption that is so deep, ladies and gentlemen. #BigTruth #DemDebate”

She has hacked the media-audience feedback loop, trading ridiculous claims for airtime, and churning that airtime into legitimacy. She seems like an effective communicator — cutting to the core of how many liberals feel — though rarely says anything of substance. She’s cultivating her fandom into a cult of personality.