Boris Johnson lines up Patel to be next home secretary - GulfToday 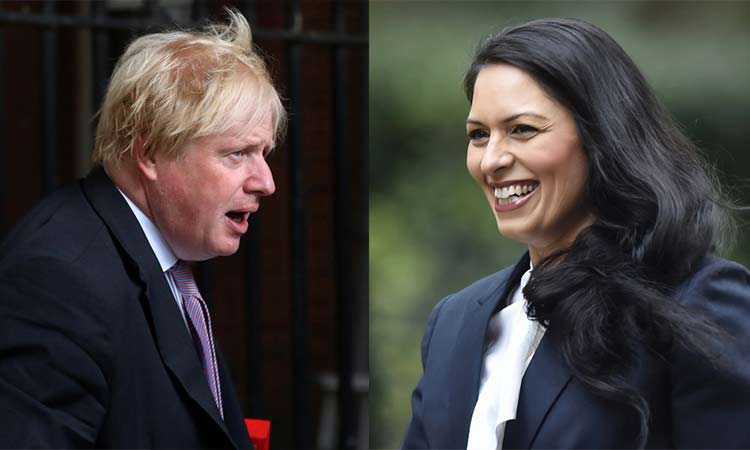 Priti Patel is being considered for a shock cabinet return as home secretary, The Independent has learned, as Boris Johnson seeks to convince the public he is not a “British Donald Trump”.

The controversial Brexiteer — sacked for misleading Theresa May over secret meetings with Israeli politicians — is poised to be among early supporters of the likely new prime minister to be rewarded.

They are also likely to include Iain Duncan Smith, another polarising right-winger, who is expected to land the crucial job of chief whip, as Johnson wrestles with his lack of a Commons majority.The top cabinet jobs could be announced as early as Wednesday — within hours of Johnson entering No 10 — if his success triggers resignations by ministers fighting the no-deal Brexit he has threatened.

Explaining why advisers are urging him to send Ms Patel, whose family were Ugandan Indians, to the home office, one source said it would be a “clear statement to the British public that Boris will not be a British version of Donald Trump”. It would also ensure a woman in a prominent post.  Johnson and the US president are friends, and the favourite for No 10 has been accused of apeing Trump’s incendiary style and racially-charged language — while refusing to criticise him over Kim Darroch’s sacking.

His closeness to the White House is certain to be a controversial feature of his premiership, particularly if he follows through on his priority of a quickfire post-Brexit trade deal.

If Sajid Javid, the current home secretary, is confirmed as the new chancellor, it would also be the first cabinet with two of the great offices of state filled by politicians from ethnic minorities.

As Johnson seeks a fresh exit deal, another key appointment being considered is Geoffrey Cox, the attorney general, to a negotiating role with Brussels, The Independent has been told.

Although popular with fellow Tories, Cox clashed with EU leaders in March when they accused him of pitching “unintelligible” ideas in a desperate bid to save Ms May’s Brexit deal.

A return to Brussels will be equally fractious, after the EU repeatedly insisted it will not renegotiate the agreement to strip out the Irish backstop, as the new prime minister will demand.

Despite a rocky campaign at times, Johnson is expected to romp home over his rival Jeremy Hunt when the leadership result is declared on Tuesday.

He will not enter Downing Street until late on the following day — as Ms May clings on to power for a valedictory session of prime minister’s questions — when the first resignations could swiftly follow. Much attention will focus on whether Johnson, as rumoured, chooses to move in with his young girlfriend Carrie Symonds. A noisy altercation between the pair led to the police being called to their flat last month.

The Independent understands that Philip Hammond, the chancellor and likely leader of the Tory opposition to a no deal, was spending the weekend discussing with his family whether to quit or wait to be sacked.

If he chooses to walk out on Wednesday, he could be accompanied by David Gauke, the justice secretary, and Rory Stewart, the international development secretary, who also look certain to leave the government.

All three defied a three-line whip on Thursday’s vote aimed at preventing Johnson suspending parliament in the autumn, to force through a crash-out Brexit on 31 OctoberHaving vowed to carry out Brexit by Halloween, Johnson then vowed to sack any minister unwilling to accept a no-deal Brexit if the EU refuses to budge.