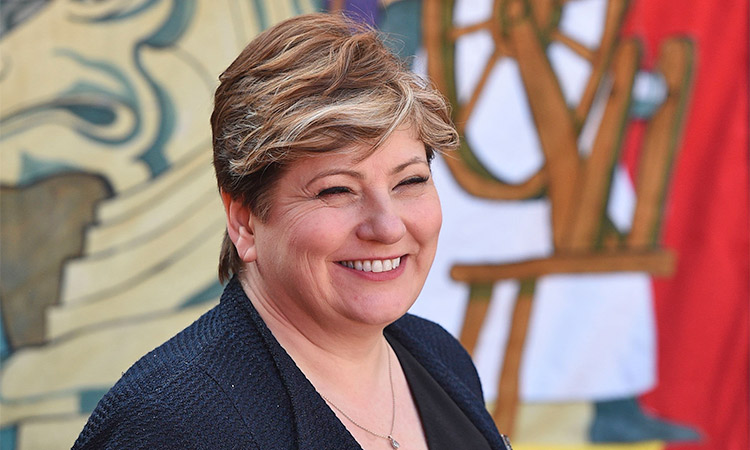 Shadow foreign secretary Emily Thornberry has departed from Labour policy by saying the party should campaign for Remain in any referendum on a Brexit deal “regardless of which party has negotiated it”.

Her comments came at a People’s Vote rally in Boris Johnson’s constituency of Uxbridge and Ruislip South where she denounced the probable next prime minister as a “lazy, incompetent (and) dangerous” figure who wants to deliver the UK into the hands of the “racist, sexist, bullying monstrosity” Donald Trump.

Ms Thornberry’s appearance on the People’s Vote platform made her the first senior Labour figure to take advantage of this week’s policy shift - unveiled by Jeremy Corbyn after months of wrangling within the shadow cabinet and trade unions - which commits the party to campaigning for a Final Say referendum and Remain vote on any Brexit outcome produced by the Tory government.But her rejection of a Brexit deal negotiated by any party puts her at odds with Mr Corbyn, who is yet to say what Labour’s platform will be at the next election, and the unions, who agreed last week that the manifesto should offer a softer “jobs-first” Brexit to be negotiated by the party if it wins.

Ms Thornberry was one of the voices within Labour’s high command arguing increasingly strongly over the past few months for a clearer Brexit policy, against apparent resistance from figures like Unite’s Len McCluskey, party chair Ian Lavery and officials around Mr Corbyn.

She is expected to join fellow shadow cabinet supporters of an unequivocal Remain position, including shadow Brexit secretary Keir Starmer and shadow chancellor John McDonnell at a Love Socialism Hate Brexit event in parliament on Monday to pile on further pressure for a manifesto promise of a referendum.

The meeting comes as momentum appears once more to be swinging behind a Final Say vote, with Theresa May’s former chief of staff Nick Timothy suggesting it might be the only way to “cut through the logjam” in parliament.

Ms Thornberry told BBC1’s Andrew Marr Show that she could not say what would be in the manifesto for an election, which could come as early as the autumn, but could “see the logic” of it offering a Final Say referendum in which Labour would campaign for Remain.

“I’m not allowed to write the manifesto,” she said. “I can tell you what I would argue for and what I think is likely to be in the manifesto, but I can’t tell you what will be in the manifesto because it hasn’t been written yet.”But speaking to second referendum supporters later in a school in Johnson’s north-west London constituency, she said that Labour “must and will campaign unequivocally to have that People’s Vote, and campaign unequivocally to Remain”.

She added: “If Labour’s position since 2016 has been to argue for an outcome to this process which does the least harm to jobs and the economy, then no matter what deal is on the table, and regardless of which party has negotiated it, our position when it comes to a new referendum must be to remain in the European Union, because that is logically the way to do the least harm to our jobs and the economy.

Acknowledging that Labour had initially promised to respect the result of the 2016 vote, Ms Thornberry said that people’s understanding of the impact of Brexit had changed significantly since then.

“If Labour’s original responsibility as democrats was to respect the result of the referendum, then our responsibility today as democrats is to demand that we go back to the British people and ask: ‘Is this the change you voted for? Is this the Brexit you wanted? Or shall we avoid all that damage and Remain?’” she said.Ms Thornberry denounced the “gentlemanly coup” which looks set to deliver Mr Johnson to 10 Downing Street on a ballot of around 160,000 Conservative members - little more than 0.3 per cent of registered voters.

“We’ve all heard Boris Johnson say that ‘do or die’, the UK will leave the EU by Halloween,” she said.