Trump retort to leaked memos puts a chill on diplomacy 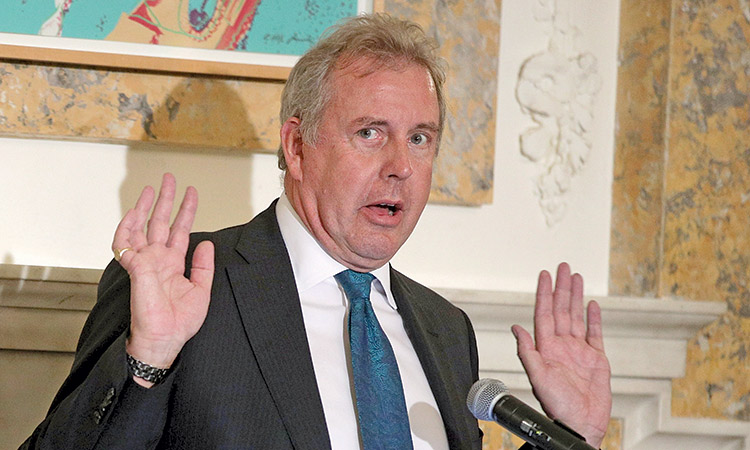 When a cache of sensitive, embarrassing US diplomatic cables was leaked nine years ago, a chill ran down the spine of many ambassadors and their staffs. Confidential memos, some criticizing key foreign partners, were suddenly blanketing the press. It made for a few awkward tete-a-tetes, a scramble for damage control and strained relations.

“We thought the sky was falling,” recalled Jeffrey Feltman, then assistant secretary of State for the Middle East. But while a couple of diplomats lost their jobs, the damage was not permanent.

“It quickly evaporated,” Feltman said. “There was a genuine sense of betrayal, but in the end all these countries had an interest in talking to us.”

Amid a similar scandal that erupted this week, the difference this time around may be Donald Trump.

British Ambassador Kim Darroch might well have survived the leak of his candid, unfavourable views of President Donald Trump — had Trump not spent two days on Twitter lashing out at the veteran envoy and making his position untenable.

The episode has left many foreign service officers, both from the US and other countries, wondering if they can have faith their reports will remain confidential. And if leaks occur, will governments and leaders react coolly and calmly — or will they exploit the situation and take it personally, as Trump did?

The mission for officials at embassies the world over is to provide unvarnished accounts of the people and politics they observe to their bosses back home.

His defenders say that is exactly what Darroch — who privately described Trump›s administration as “inept” and “dysfunctional” — was doing. And he was not alone.

Anyone who has spent time speaking to foreign envoys stationed in Washington is familiar with the negative opinions that many have of Trump and his often chaotic administration.

Several have described spending the first year of the Trump presidency trying to understand him and the second year trying to find government officials to work with. Trump has left many key posts unfilled or handled by “acting” authorities, which has complicated the work of foreign envoys.

They also have had to confront a president whose public pronouncements are often at odds with his administration›s actions, a confusing and unpredictable dynamic. A Mexican diplomat said his government often felt whiplashed by Trump›s sudden and frequent policy reversals on trade and other issues.

A European diplomat recently described waking up every morning and checking Trump›s Twitter feed to determine whether tariffs had been levied on his country›s economy. Another said he and his colleagues hope to persevere until one day “all of this will be over.”

Many have counseled their governments that the way to deal with Trump is to flatter him and avoid disagreements, then strive to resolve any actual issues at a lower level.

That didn›t save Darroch, however, whose berating by Trump came just weeks after the president was given lavish celebrity treatment during a state visit to Britain, including dinner with the queen.

If a foreign leader treated an American ambassador the way Trump treated the British ambassador, we would be up in arms,” Schiff told reporters. “Trump›s continued attempts to bully our allies and their diplomats undermine the work of (envoys) we send overseas to represent the United States.”

Even some of Trump›s allies were dismayed by the episode, without directly faulting Trump.

Saying he did not “particularly like” the language Darroch used, Sen. Lindsey Graham, added, “But his analysis was his analysis. These (cables) were meant to be confidential, and now they›re out in the public. That is very bad for diplomacy.”

Daniel Shapiro, former US ambassador to Israel, said on Twitter that Darroch, in contrast to some diplomats, was “a model of discretion.. ... He genuinely meant his words to remain private.”

Publicly, Darroch always spoke of Trump and his government in polite terms.

“This is an administration which may operate in some unconventional ways, but we Brits find them very congenial. A lot seem to have long experience in the UK, and they kind of like us,” Darroch said late last month at the annual Aspen Ideas Festival in Aspen, Colo.

John Feeley, a veteran diplomat and US ambassador to Panama until earlier this year, said incidents such as the leak of Darroch›s memos, as well as the 2010 dump of US cables by WikiLeaks, erode trust.

“It undeniably creates damage that lingers long after the news is in the headlines,” said Feeley, now a political analyst at Univision television network. “It was exacerbated by the highly personalized and vindictive way President Trump operates.”

Feeley, who resigned from the State Department this year in protest over administration policies, said the president›s reaction was unusual. “Any other president would not let a foreign ambassador get under his skin,” he said.

Feeley was the No. 2 at the US Embassy in Mexico when WikiLeaks published thousands of pages of classified diplomatic communications in 2010. Numerous memos from Feeley›s embassy were included in the leak, many of which were highly critical of the Mexican government›s battle against drug traffickers. One called the Mexican army “risk-adverse” and questioned the likelihood of then-President Felipe Calderon›s political party of being reelected. Another quoted a senior Mexican official admitting large parts of the country were lost to drug cartels. All these assessments, while generally accurate, were taboo in public Mexican discourse.

Calderon was already gunning for US Ambassador Carlos Pascual, who had been openly critical of the government and was dating the daughter of an opposition leader. The WikiLeaks cables gave Calderon the perfect pretext for demanding Pascual›s removal, and in March 2011, then-Secretary of State Hillary Clinton announced Pascual›s resignation.

Feeley said the embassy staff lay low for a while after that, quietly going about its business. Finally, during a visit by then-Lt. Gov. of California Gavin Newsom, Feeley was able to privately ask Calderon if he still harboured hard feelings toward him.

Calderon told him no, Feeley recalled. But he cautioned the US diplomat to be careful of what he said — publicly and otherwise.